The Pioneer Diamondbacks overcame a slow start to put together a strong finish in a 43-14 win over the Brownsville Rivera Raiders at Richard Thompson Stadium on Friday night, improving to 2-2 on the year.

The Pioneer offense opened with a bang as Jacob Rosales connected with Luke Padilla on a 55-yard first quarter touchdown, but things stalled after that. The Diamondbacks entered Rivera territory five times in the first half but walked away with two missed field goals, two turnovers and the score. A fumble recovery in the Rivera end zone by Pioneer linebacker Marcos Salazar gave the Diamondbacks their only other first half points, taking a 15-0 lead into the break. 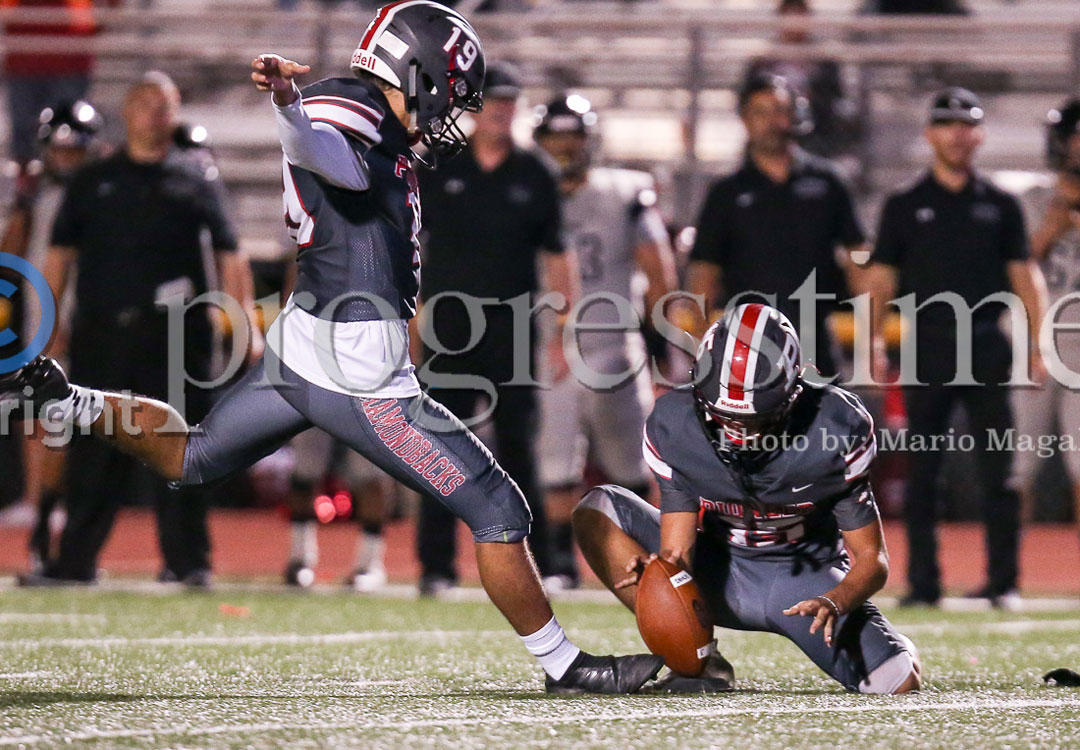 When the Diamondbacks emerged from the locker room after halftime, they turned things up a notch.

“We had a talk at halftime and got things going in the second half,” said Pioneer Head Coach Tom Lee. “We got the ball to our playmakers and made some big plays.”

The Pioneer offense exploded for four second half touchdowns, with three scores on plays of 55 yards or more. Rosales started the scoring when he broke off a 61-yard run around the right side of the Rivera defense to put Pioneer up 22-0 in the third quarter.

“I think we came out flat knowing that they’re 0-3 and knowing how good our offense can be,” Rosales said. “In the second half, that’s where we started firing on all cylinders.”

After the Diamondback defense surrendered a touchdown to the Raiders, Rosales put Pioneer on the board again, this time on a slant that receiver Allen Davila took to the house for 75 yards. Eddie Lee Marburger scored Pioneer’s final two touchdowns, one on a 55-yard strike to receiver Lavar Lindo, and the other on a 4-yard pass to Davila.

“They were fantastic,” Rosales said about the Pioneer receiving corps. “They make my job a lot easier; I just put it on the spot that I’m told to put it and they go out and get it.”

The two scores by Davila were his first on the varsity level, and he made his night even bigger on special teams when he recovered a muffed punt in the third quarter.

“I was just caught in the moment and had to do what I had to do for the team,” Davila said. “ It felt good to help out the team. This was the first time it happened and I’m hoping to do it again next week.”

While the Pioneer offense struggled early, the Diamondback defense was feeling it from the first snap. They combined to force five Rivera fumbles on the night and were led by the constant pressure up front by their 3-4 defense. Defensive end Alonzo Ibarra racked up five tackles for loss and linebacker Matthew Rossow added one sack, one forced fumble and one fumble recovery.

“It feels good for all of us to work together and hit them hard in the mouth,” Rossow said. “This was real important for us to accomplish before district because we can go out and have confidence in ourselves and in our brothers around us that we can ball during district.”

The Pioneer Diamondbacks enter their bye week at 2-2 in non-district play and are scheduled to open District 16-5A DII action on Friday, Oct. 5 at home against the Mercedes Tigers.