Tensions were high Monday morning outside Tabasco Elementary School as more than 50 people protested the campus following a viral social media post accusing the school of mishandling the rape of a former student.

On Friday, a Facebook page titled “Justice for Her” was created. A post said the page belongs to the mother of a five-year-old former student of the school who accused the campus of trying to sweep the rape of her daughter under the rug. 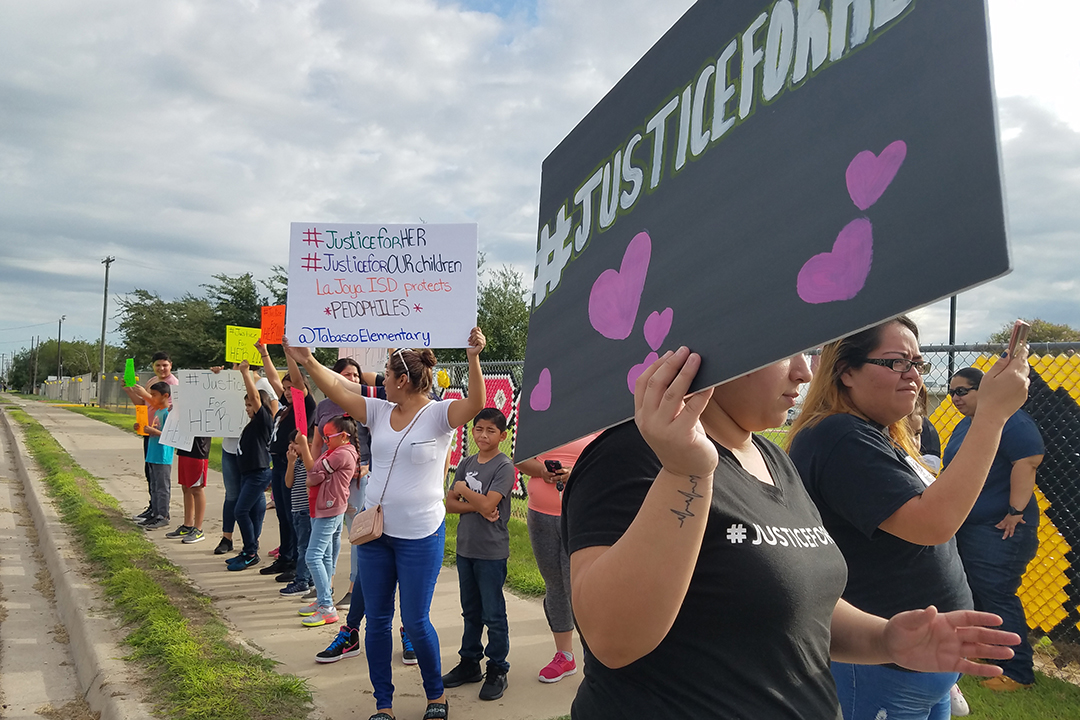 “My daughter is 5 years old she attended Tabasco Elementary in La Joya ISD, April 2018 she was taken into the boys restroom by a 14 year old ‘mentor&rsquo; (sic),&rdquo; a screenshot of the original post dated Friday, Sept. 21, said. “And was raped in the school bathroom.&rdquo;

The original post said she was never notified of the abuse her daughter faced.

“No parents were notified, this could&rsquo;ve occurred to potentially anyones child in that school,&rdquo; the post continued. “After the incident, everyone turned their backs on my daughter no school counseling was offered nothing it was as if my daughter never existed.&rdquo;

The post quickly went viral over the weekend, causing the district to release a statement on the incident Sunday. The statement confirmed an incident occurred between two minor students at Tabasco Elementary Thursday, April 26, 2018 but could not comment further on the allegations due to “state and federal confidentiality regulations, the age of the parties involved and the nature of the allegations.&rdquo;

“The district can confirm that following an investigation, an arrest was made concerning the incident,&rdquo; the statement reads. “However, thereafter, all proceedings were conducted by the appropriate state District Court, Hidalgo County District Attorney’s Office and the Hidalgo County Probation Department.&rdquo;

The program has been with the district for 25 years but as of Monday afternoon suspended indefinitely in the district, though the district has yet to officially say the student was part of that program.

For several parents, the statement from the district was not enough. This led to them protesting outside Tabasco Elementary Monday morning.

Among the protestors was the creator of Justice For Her and the mother of the 5-year-old alleged victim. She agreed to speak with Progress Times under the condition of anonymity.

As it is not the policy of the Progress Times to identify victims of sexual abuse, the name of her daughter will also be withheld from this report.

“I was informed of this incident by my daughter,&rdquo; the mother said. “I notified the police department, Child Protective Services and had a meeting with the principal the day after the incident. I did everything I thought I had to do. I took my daughter to get tested at the emergency room at Renaissance, I have copies of everything. I am not lying, this is the truth.&rdquo;

The creator of the Justice For Her page said she was ultimately driven to create the page following a preliminary hearing that occurred Friday where the suspect of the case had reached a plea deal to receive only one-year of probation and counseling as punishment.

The plea agreement left the mother of the victim distraught, she said.

“I was frustrated, crying and heartbroken. It&rsquo;s not fair,&rdquo; she said. “They had told me they did the plea deal because of a ‘lack of evidence&rsquo; on our part which was a lie. We had forensic reports from the nurse who examined my daughter, there&rsquo;s even a video of her being interrogated and [describing the assault in graphic detail].&rdquo;

Ultimately, the mother withdrew her daughter from the district less than two weeks after the incident. According to La Joya ISD District Police Chief Raul Gonzalez, the suspect in the case was also withdrawn from the district.

Gonzalez spoke of the incident at a Monday morning news conference about the incident at the La Joya ISD Public Information Office. From inside the building, protestors chanting “Justice For Her&rdquo; could be heard.

“Unfortunately, what is happening here is that the victims are being revictimized and this will have long lasting damage to everyone involved,&rdquo; Gonzalez said, adding that the parents of the parties involved were immediately notified of the incident. “We&rsquo;re imploring the community to act responsibly, refrain from spreading falsehood and misinformation and understand that nothing has been hidden or covered up. We do thorough investigations in all complaints and incidents.&rdquo;

Despite the statement from Gonzalez, the Justice for Her creator said she feels that the incident was being hidden from the public, and that no one from the district offered to help her.

“The principal never offered any services, no one offered any type of counseling or told me ‘we&rsquo;re going to do everything we can for your daughter.&rsquo; Nothing was offered,&rdquo; she said. “My district has done nothing. I tried to get the Texas Rangers involved and nothing was done. That is why I turned to social media so parents can know about this incident because it is not right.&rdquo;

The Justice for Her creator also said she feels grateful for the people who attended Monday&rsquo;s protest, and is making sure her daughter will walk away from this experience as intact as possible.

“Obviously I want the best well being for my daughter,&rdquo; she said. “I take her to counseling and extracurricular activities I think are beneficial to her well being and her state of mind that will give her the confidence to be strong. My daughter will be fine. I will make sure of that.&rdquo;