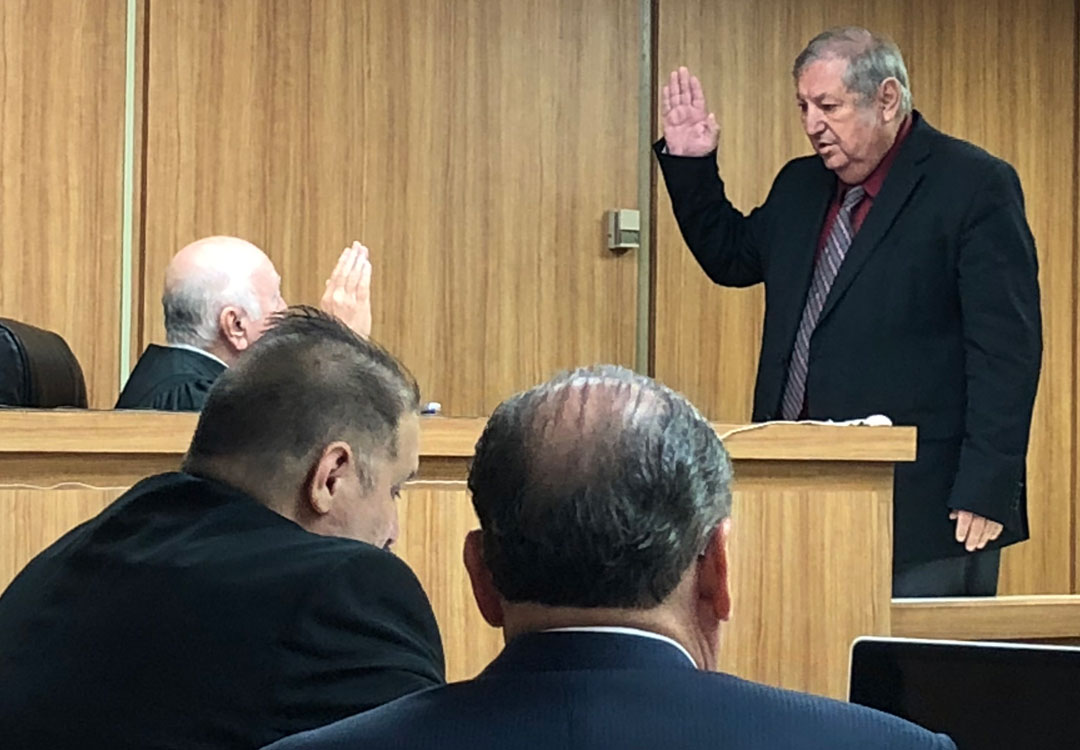 He asked O’caña what “scheme” and “conspiracy” mean. He posed hypotheticals about how unscrupulous candidates might manipulate elections. And he demanded details about the company that hired campaign workers for O’caña.

“Now the question then becomes: How high up the chain does it go?” Salinas said.

After four hours on the witness stand, the answer remained fuzzy.

The lawsuit pits Beto Salinas, who governed Mission for two decades, against O’caña.

Beto Salinas fell just three votes short of victory in May, when he faced O’caña and another candidate. O’caña narrowly won the runoff in June.

Both men hired high-powered lawyers to handle the case.

State District Judge J. Bonner Dorsey, who retired from the 13th Court of Appeals, will determine whether or not Mission holds a new mayoral election.

On Monday and Tuesday, witnesses testified about campaign workers who offered cash for votes and political operatives who manipulated mail-in ballots.

Rick Salinas put O’caña on the witness stand Wednesday, attempting to link him to illegal activity.

After he dispensed with the definitions, Rick Salinas started asking hypothetical questions about illegal voting.

“And in some situations, depending on how far you’re willing to go — right, you’ve heard of this in the past — some people will even offer to pay people to vote,” Rick Salinas said.

“That’s correct, I’ve heard it from both sides of the—” O’caña said before Rick Salinas interrupted him.

While the donations linked O’caña to supporters of Team L1berty, the now-defunct western Hidalgo County political party, the significance of that connection remained unclear.

O’caña said he worked with LeFevre in Peñitas, but didn’t know him very well.

After dissecting the donations, Rick Salinas shifted focus to the mayor’s niece, Veronica O’caña, who provided campaign services under the name VO Consulting.

The campaign paid VO Consulting thousands for political work but never signed a contract or requested receipts, O’caña said, adding that he trusted his niece.

“He lost the state district court judge’s race against my ex-wife. He lost the school board race. They got desperate,” Rick Salinas said in an interview. “They couldn’t afford to lose another (expletive) race. And obviously members of Patty O’caña’s family were the ones that took control of the (expletive) election.”

“Obviously what they did was they created this bogus company to try to distance themselves from whatever it was that VO was doing,” Rick Salinas said.

Courtroom testimony about donors and hypothetical questions about corruption, however, didn’t support that conclusion, said Hinojosa, the attorney who represents O’caña.

“I don’t think it revealed anything, to be honest with you,” Hinojosa said.

“I just thought it was Mr. Salinas’ grandstanding,” Hinojosa said. “That’s all it was.”