Nearly 250 students and their parents at a Sharyland ISD elementary school joined hundreds of campuses nationwide in a prayer rally Wednesday.

“See You at the Pole” is a global day of student prayer that is held every fourth Wednesday in September. This past Wednesday, John H. Shary elementary School became the first elementary campus in the district to participate in the event, according to Nikki Barker, an official at that campus. 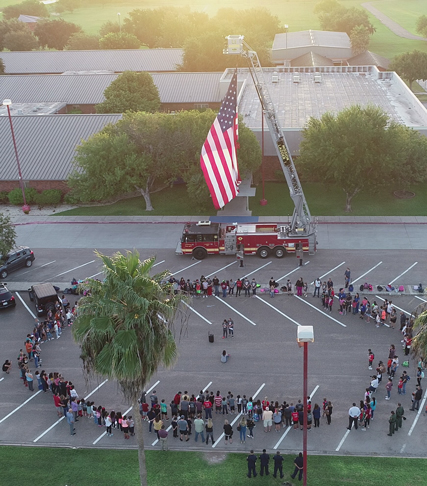 “We want this to be a safe haven for students where they don’t feel like they’re being a burden on campus and that God is always with them,” Barker said. “That way, any kind of hardship students suffer, from bullying to stuff at home, they know God is with them.”

Barker is a sponsor for the Fellowship of Christian Athletes chapter at John H. Shary Elementary, which started last year and became the first elementary school in the district to have an FCA chapter, which is held at the junior high and high school campuses, Barker said.

Coming from a family that prays together everyday, she was moved to create an FCA chapter at her campus following the death of her mother two years ago, she
said.

“I asked one of my sons to come into my office before school started to pray with me,” Barker recalled. “He looked around as if he was making sure no one was watching him and he was ashamed to pray with me. I thought ‘No, this shouldn’t be happening. They need to know its OK to pray in school.’ That’s when I wanted to change.”

Barker started the chapter during the previous school year where students met every Wednesday morning from 7:15 through 7:45. The first meeting had 30 students. Their most recent meeting 140 students and had to be held at the gym, Barker said.

“We grew dramatically, the students were excited to attend FCA in junior high but we need to start exposing this to them earlier so they can grow toward God and never depart from him,” Barker said.

This led to the FCA chapter to partake in the See You at the Pole event where they invited parents and law enforcement officials to join the movement. The Mission Fire Department was also at the scene, hoisting a 40-foot U.S. flag that participants circled as they prayed and read scripture for half an hour.

“We’re blessed to have this support from the community,” Barker said. “Me and my other two FCA coaches lead this group but we hope that eventually, our students will have the confidence to talk about God and lead these discussions, that’s when we know we’ve done our job.”

Ebonie Chatman, a 4th grade student at John H. Shary and member of FCA, said she was proud of her involvement at the event.

“I really care about God and hope we can continue sharing God’s word,” she said.