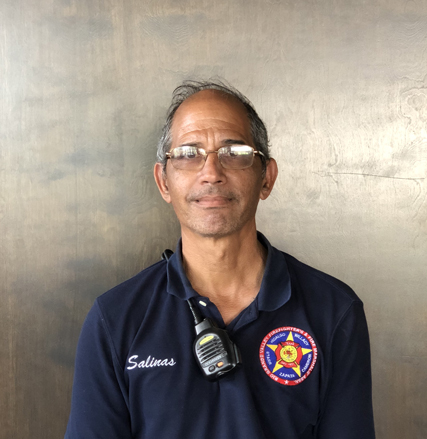 “It’s kind of hard. Bittersweet. I’ve been there several years,” Salinas said, adding that he needed to make more money. “But we had to make a living.”

Salinas spent 13 years with the La Joya Volunteer Fire Department, including four as chief. His wife, Leticia, served as the training coordinator.

La Joya compensated him with a $1,200 monthly stipend but didn’t provide health insurance or retirement benefits.

Salinas said he recommended that La Joya budget for a full-time chief and two full-time employees to manage the department. The City Commission, though, never approved paid firefighters.

To supplement his income, Salinas accepted a part-time job with the Peñitas Volunteer Fire Department.

“And Leroy basically hit all those markers,” said City Manager Omar Romero, adding that Salinas will become a major asset when Peñitas starts accepting county fire calls. “He knows all the local fire chiefs, knows the local fire marshal, understands the rules when it comes to the county.”

Salinas said he notified La Joya about the move in mid-September. He started work in Peñitas today.

When they heard Salinas planned to leave for Peñitas, the volunteer firefighters resigned too.

“Unfortunately, the volunteers are saying ‘If you’re leaving, we’re leaving,’” Salinas said, adding that he appreciated their loyalty. “None of my guys are going to stay behind.”

It remains unclear whether or not the La Joya Volunteer Fire Department will keep responding to calls.

“I don’t know how they’re going to do it, to be honest with you,” Salinas said, adding that he suggested several replacements and offered to train them.

“We’re definitely working on a fire chief ASAP,” Alaniz said, adding later: “And what I need to do is rebuild and see who is active and who is not.”

La Joya went through a similar transition during 2015, when more than a dozen volunteer firefighters left the department.

They filed a formal complaint against Salinas, claiming he terminated volunteers or forced them to resign. The City Commission sided with Salinas, who rebuilt the department from scratch over the next several years.

Alaniz said he wished Salinas well and didn’t blame him for taking a full-time job.

“I hope Peñitas does good for him,” Alaniz said. “Because if anybody deserves it, it’s him.”