The Mission election trial took a dramatic twist Tuesday, when a politiquera testified about a secret deal to switch sides during the mayoral runoff.

Esmeralda Lara — a well-known politiquera with a checkered past — said she campaigned for mayoral candidate Armando “Doc” O’caña until May. 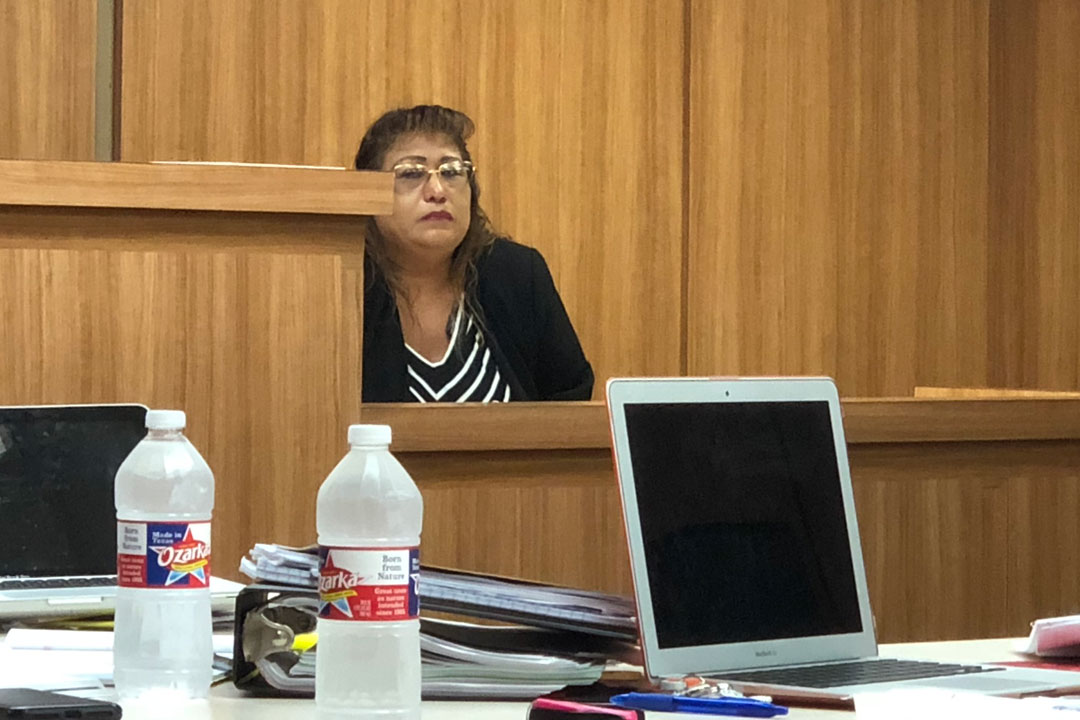 After the May election, a man approached her on behalf of Mayor Norberto “Beto” Salinas, who wanted to her switch sides, Lara said. The man promised her cash, a job with the city and free State Farm Arena tickets.

“I took it,” said Lara, 54, a custodian who works for the Mission school district, adding that she wanted a better job.

Lara spent more than three hours on the witness stand Tuesday, the sixth day of the Mission election trial.

Beto Salinas, the longtime mayor of Mission, lost the runoff election to O’caña, a popular member of the City Council with a large and politically powerful family.

After reviewing the results, Beto Salinas filed a lawsuit against O’caña and demanded a new election.

Lara said she volunteered for the O’caña campaign, block-walking and distributing fliers. Neither O’caña nor his campaign manager, Veronica O’caña, paid her, Lara said, adding that she worked strictly on a volunteer basis.

With two challengers on the ballot, Beto Salinas fell just three votes short of victory in May. O’caña placed second.

With the candidates preparing for a rematch, a man named Marco Perez approached her, Lara said. She didn’t specify when or where they met.

Perez showed her a $1,500 check from the Beto Salinas campaign account, Lara said, adding that the check had “Julian” written on the memo line.

During the meeting, Perez asked her to switch sides, Lara said. He wanted her to campaign for Beto Salinas and City Council candidate Julian Gonzalez.

Perez promised her $1,500 cash, a job with the city and free State Farm Arena tickets, Lara said, adding that Perez assured her the deal would remain secret.

“He told me that he would get me a better job where I didn’t have to sweat. He made it sound real good. So I believed in him. I really believed in him. And they made me feel like ‘Ok. You’re going to have something better,’” said Lara, who appeared on the verge of tears. “I made the stupidest mistake in helping him.”

The arena is owned by the city of Hidalgo, where Julian Gonzalez works as city manager.

“I don’t know Esmeralda Lara. I’ve never talked to her,” Gonzalez said when told about her testimony. “So I don’t know where she’s getting that from.”

While she promised to testify truthfully, major questions about Lara remain.

The Texas Rangers investigated Lara and her aunt, a politiquera named Elvira Rios, after the May 2005 mayoral race in McAllen, according to Department of Public Safety records.

A grand jury indicted Lara on 20 charges, including providing unlawful assistance to voters.

The judge barred any questions about the charges on Tuesday. Rick Salinas, however, kept trying to ask about the case anyway.

Whether or not attorneys could play a voicemail Beto Salinas left on Lara’s phone also required intervention from the judge, who ruled the voicemail couldn’t be played until attorneys translated the call and provided the court with a transcript.

Rick Salinas relentlessly attacked Lara’s story about switching sides, bombarding her with questions and raising doubt about her testimony.

In the messages, O’caña-Olivarez and another woman thank supporters and mention that they “missed” Lara.

“My heart was with u all and my prayers to (sic) I new Lisa wouldn’t let me down I can always count on u,” Lara wrote, referring to another O’caña supporter. “Now I have to celebrate with you all.”

Asked what she did for Beto Salinas after switching sides, Lara said she talked with voters and distributed campaign fliers. She denied handling any mail-in ballots.

“Give me two names of two people that you remember giving them a flier that purportedly was you supporting Beto Salinas,” Rick Salinas said. “Two names — two names that I can call and talk to. Give me two names.”

Lara said she couldn’t remember who received the fliers. She eventually named one person.

Rick Salinas also ridiculed the idea that Lara made a secret deal with the Salinas campaign.