Believe it or not, five weeks of the 2018 Valley high school football season are in the books and with only six weeks remaining before the playoffs start, it’s time for the seven teams from the Mission, Sharyland and La Joya school districts, the Big 7, to prove whether they are true contenders or mere pretenders.

As members of District 16-5A-1, the 4-0 (4-1 overall) Mission Veterans Patriots and the 3-1 (3-2 overall) Palmview Lobos have each already played four district games. And with just one district loss between them, they have already established themselves as true contenders. 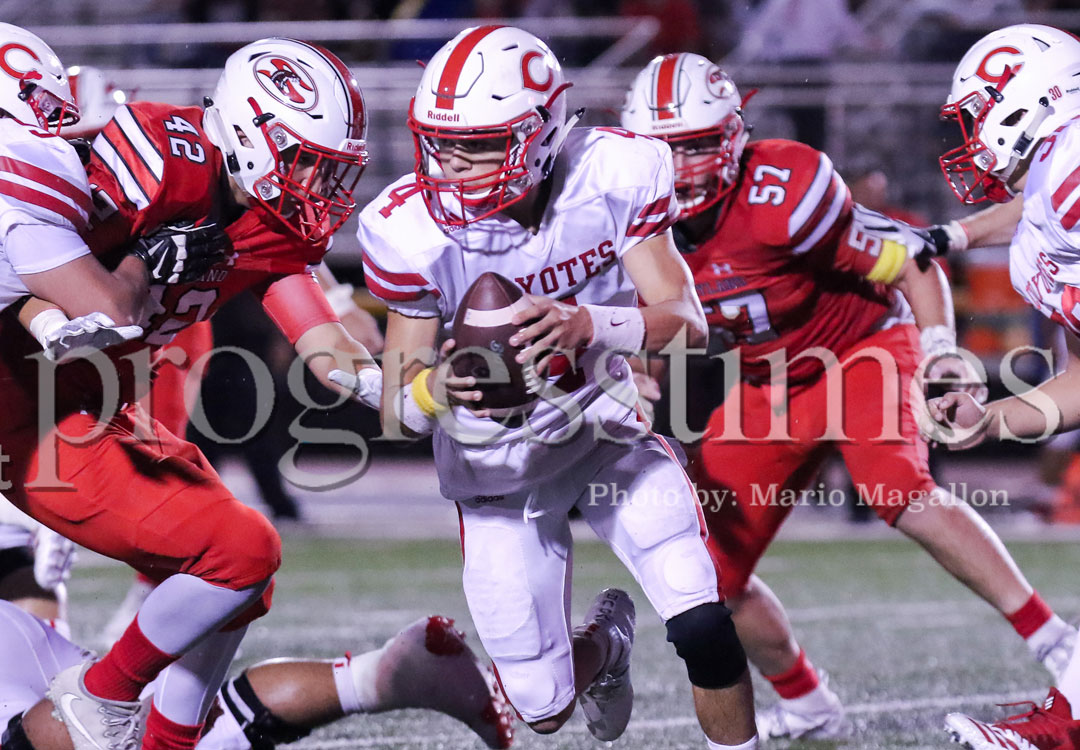 The Sharyland Rattlers, the Mission Eagles, the La Joya Coyotes and the Juarez-Lincoln Huskies on the other hand, have only played one district game each. And while the Rattlers are the only one of those four teams to win their district opener, it’s still too early to tell which of the two aforementioned categories these four teams will eventually find themselves in. The same thing goes for the Pioneer Diamondbacks who, as a result of having a bye last week, have yet to play a district opponent.

This week the Patriots have a bye and the Lobos played at the 4-0 (4-1 overall) Brownsville Pace Vikings last night. That leaves five games involving Big 7 teams on tonight’s schedule. With the McAllen Bulldogs at the Mission Eagles game being previewed separately as our game of the week, we will take a look at the remaining four games here.

McAllen Memorial Mustangs at La Joya Coyotes
Through their first three games, the 0-1 (3-1 overall) La Joya Coyotes looked unbeatable. They defeated the Palmview Lobos (39-19), the Roma Gladiators (49-0) and the Sharyland Rattlers (31-7). As a result, the Coyotes found themselves with a perfect 3-0 record as they prepared to take on their first District 30-6A opponent, the 1-2 PSJA Bears.

While the Coyotes had the better record through Week Three, it was the Bears that emerged victorious in Week Four with a furious passing attack by PSJA quarterback Trey Guajardo who threw for 501 yards, an .806 completion rate and seven touchdowns; tying a Valley record for most passing touchdowns in a single game currently held by his head coach, Lupe Rodriguez of Mission, among others.

As a result, the Bears put 46 points on the scoreboard while the Coyotes could only manage 25 points of their own.

Tonight, the Coyotes will be taking on the 1-0 (2-2 overall) McAllen Memorial Mustangs. The Mustangs came extremely close to doing something last week that they haven’t done in over four years, lose to a district opponent. In that game, the Mission Eagles led the Mustangs by a score of 38-28 with two minutes left on the clock only to have the Mustangs put 14 points on the board and pull out a 42-28 victory.

Sharyland Rattlers at Roma Gladiators
After getting off to an uncharacteristically slow start, the then 1-3 Sharyland Rattlers opened their District 16-5A-2 schedule last week by hosting the then 0-4 Laredo Cigarroa Toros. Led by quarterbacks Edgar Longoria (10/14, 200 yards and two TDs) and Oscar Valdez (5/6, 90 yards, one TD and one INT), the Rattlers had their way with the Toros, defeating them by a score of 42-13 to improve their record to 1-0 (2-3 overall).

Coming off a 1-7 (1-9 overall) 2017 season, the Gladiators have certainly struggled to put games under the win column for over a year now. With the Rattlers tied atop the district standings with the 1-0 (5-0 overall) Valley View Tigers and the 1-0 (2-3 overall) Mercedes Tigers, this is a game that they need to win to assure themselves of at least a share of the district lead as they prepare to go up against teams like Edcouch Elsa and Sharyland Pioneer in the weeks to come.

Mercedes at Sharyland Pioneer
Coming off their bye week, the 2-2 Pioneer Diamondbacks have had two weeks to prepare for their District 16-5A-2 opener tonight against the 1-0 (2-3 overall) Mercedes Tigers. After opening their 2018 schedule with a 19-16 win over Edinburg North, the Tigers lost consecutive games to Nikki Rowe (48-19), La Feria (28-0) and Edinburg High (45-18) before defeating Edcouch Elsa (23-16) in their district opener last week.

Under first-year head coach Tommy Lee, the Diamondbacks have alternated losses and wins so far this season.

Losses to Harlingen (64-17) and Mission (21-17) and wins against Juarez-Lincoln (31-29) and Brownsville Rivera (43-14) have the Diamondbacks at 2-2 in non-district play. Hopefully for Pioneer players, coaches and fans, the Diamondbacks will break their lose/win/lose/win pattern tonight by defeating the Tigers and getting their district schedule off on the right foot.

Juarez-Lincoln at Nikki Rowe
The Juarez-Lincoln Huskies may be 0-4 so far this season, but it’s not as if they have been blown out by their opponents. They did lose by 20 points in Week One, but that was to the now 5-0 Rio Hondo Bobcats who have outscored their opponents by more than two to one. In Week Two, the Huskies led the Pioneer Diamondbacks going into the fourth quarter, only to lose by two points, 31-29.

While the Huskies have played each and every one of their opponents tough, they’re going to have to figure out how to close out their games if they are going to salvage their season. And the sooner they do so the better. A win tonight against the 1-0 (3-1 overall) Nikki Rowe Warriors will go a long ways towards doing just that.