Because of the flooding throughout Hidalgo County in June this year, the drainage district hopes to begin countywide projects that require funding immediately.

The City of Mission held a workshop on Monday to listen to a presentation by Hidalgo County Drainage District No. 1 about the proposed issuance of bonds for drainage improvements as reflected in Proposition A. 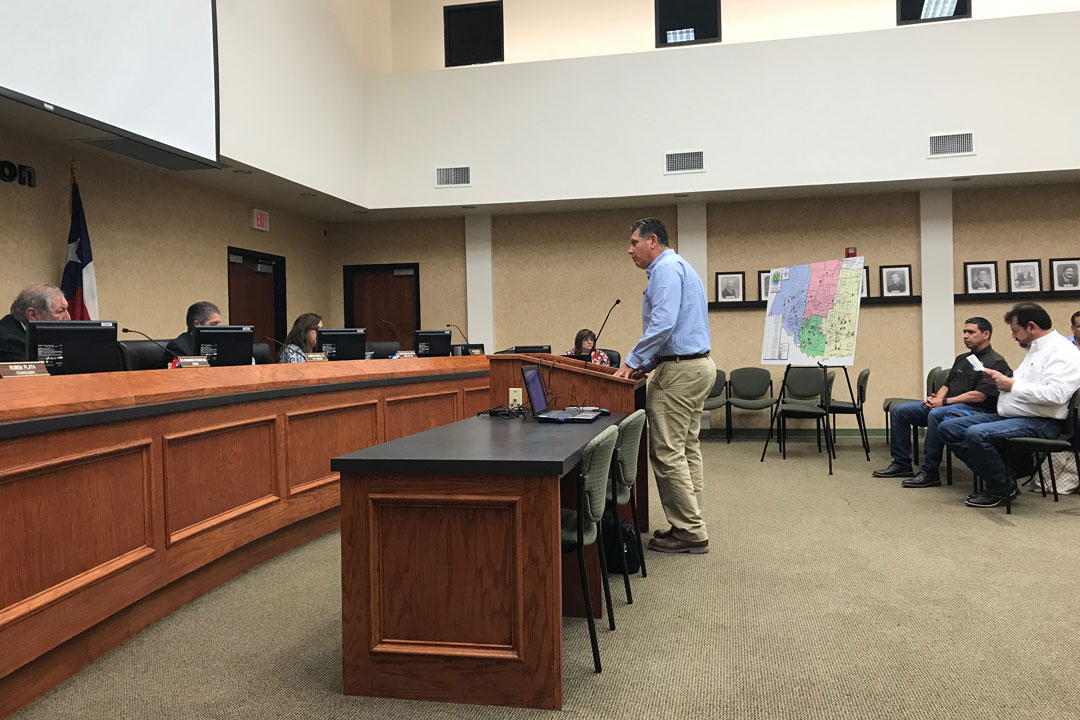 “I know there&rsquo;s been issues and talk about the rain we have been receiving in the last couple of months,&rdquo; Martin Garza, Mission City Manager, said. “I know that our city staff have been working very closely with Hidalgo County District No. 1.&rdquo;

Garza mentioned that an advisory board has been put together by the drainage district, which includes Mayor Armando O&rsquo;ca&ntilde;a and council member Jessica Ortega-Ochoa.

Proposition A would cover a $190 million drainage bond, which would eventually result in a $0.03 (three cent) property tax increase per $100. The Hidalgo County Drainage District No. 1 hopes to positively impact areas that are in critical need of improvement.

The drainage bond would cover a total of 37 projects, 12 of which would directly impact Precinct 3 and the City of Mission. The mayor, city manager and city council present at the workshop appeared to be in favor of the bond being passed.

Commissioner of Precinct 3, Joe Flores, was present at the workshop, and he talked about the importance of passing Proposition A and getting the projects started.

“We&rsquo;re talking about improving the lateral here in the south of Mission,&rdquo; Flores said. “We got a lot of rain in north Mission, north Alton, north Palmview. We need to get things done here in the City of Mission and the northern part of Hidalgo County.&rdquo;

Commissioner of Precinct 1, David Fuentes, spoke about how the rain has impacted the entire Rio Grande Valley and noted that Mission is still getting consistent rainfall.

“Much like the west, the east incurred a lot of flooding over the last couple of months,&rdquo; Fuentes said. “We were mostly impacted in the June event, unlike you guys who have been suffering a lot with repeated rains.&rdquo;

“This is probably one of the wettest months in history for our area,&rdquo; Fuentes added. “Because of that and all the flooding we&rsquo;ve incurred, this is an extremely important project. We are in severe need of these improvements.&rdquo;

Raul Sesin, the Hidalgo County Floodplain Manager, gave the presentation of Proposition A in order to address any concerns or questions the mayor or council may have in regards to the bond election.

The 37 projects will bring “immediate relief&rdquo; to the areas affected by the June floods, according to Sesin. He brought up the Mission lateral, which is one of the major projects that has been identified specifically for the Mission area.

“That&rsquo;s one of the major veins that we have running east and west,&rdquo; Sesin said. “There are two projects that will directly impact the City of Mission, [one of] which is that Mission lateral improvement, which is about seven miles of ditch widening.&rdquo;

If the bond is passed, the drainage district would be able to anticipate doubling the capacity of the Mission lateral itself.

“We are also looking at the acquisition of about 72 acres of land to create detention facilities, so we can manage the water that&rsquo;s coming,&rdquo; Sesin said.

Sesin said the drainage district is looking at all the ways to manage water in the Valley in order to “improve our system&rdquo; and “maximize the impact to the residents.&rdquo;

Council member Norie Gonzalez Garza asked how the city can help the drainage district get Proposition A passed, and Sesin responded by saying to help them further educate the public.

“We want to educate the public on the impact that this bond issuance will have,&rdquo; Sesin said. “It&rsquo;s been developed based on the experiences we&rsquo;ve had in June and prior experiences.&rdquo;

The entire presentation about Proposition A, as well as the whole workshop, was streamed live on the city&rsquo;s Facebook page. The Hidalgo County Drainage District No. 1 also had booths set up at the La Joya Independent School District National Night Out on Tuesday, and the City of Mission National Night Out on Thursday, in order to answer questions directly from the public.

Proposition A will be up in a bond election this November, and voters can vote yes or no to passing it.