A week after losing a heartbreaker to McAllen Memorial, the Mission High Eagles came out and dominated McHi from the opening kickoff on their way to a 37-0 victory to improve to 4-1 on the year and 1-1 in district play.

Junior quarterback Damian Gomez connected with sophomore fullback Andrew Maldonado to kickoff Mission’s 37-point first half barrage on a 9-yard play action pass that went for six. A couple plays before the score, Mission Head Coach Koy Detmer chose to keep his offense on the field for a 4th-and-3 that Maldonado converted on the ground. 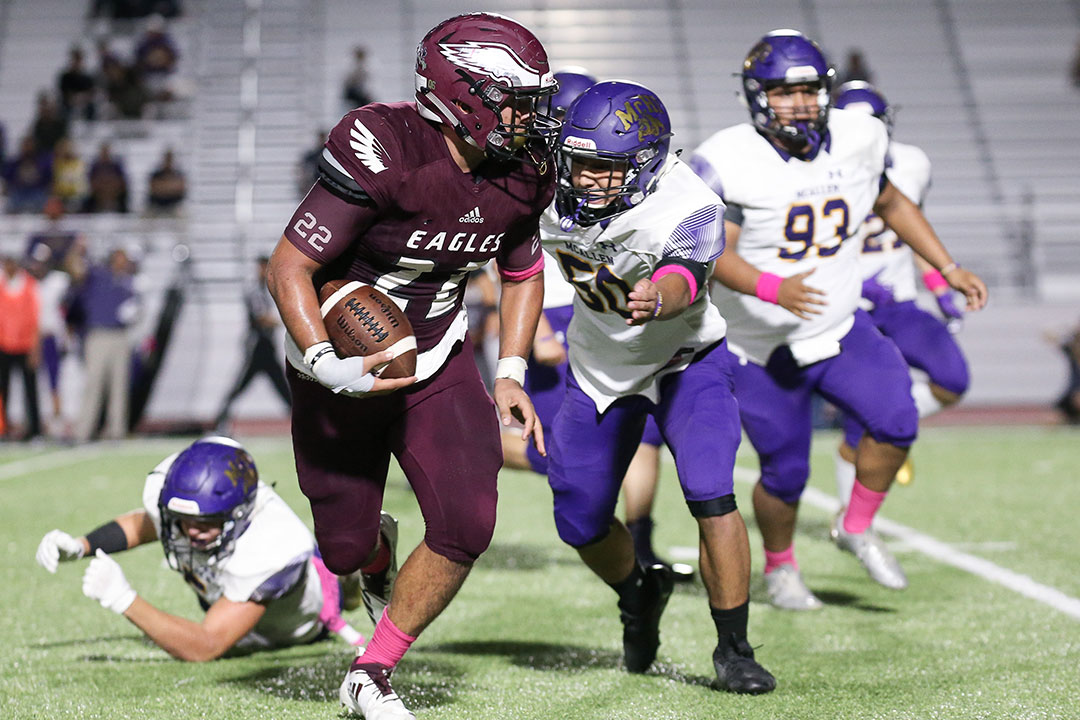 “We felt like we needed to come out and get after it right off the bat,” said Mission Head Coach Koy Detmer. “We had a sour taste in our mouth after last week, so we needed to get over that. We had a good week of practice and got after it right away to start the game. Really proud of the way the team played, especially in the first half.”

On McHi’s first possession, it was the Eagle defense who was making plays. Senior Al Tijerina jumped on a Bulldog fumble, one of four first half turnovers forced by the Mission defense. The Eagles didn’t even surrender a first down to the Bulldog offense until five minutes into the second quarter.

Mission was rolling in all three phases of the game as the special teams unit blocked a punt and forced a mishandle by McHi’s punter, which he paid for with a big hit before Mission jumped on the ball deep in McHi territory.

Mission sophomore linebacker Justin Soto was causing problems for the Bulldog offense all night as he was constantly blowing up plays in the backfield. Soto also forced and recovered a fumble early in the second quarter, helping lead the Eagles to their first shutout of an opponent since 2013.

“If one of us does good, it brings the team energy and we all feed off it and we don’t quit,” Soto said. “The coaches have been telling us if we had a shutout they’d bring us donuts, so I guess that’s what motivated us to do it, so donuts tomorrow morning (laughs).”

Mission’s ground attack put up the rest of the Eagles’ points as Gomez snuck one in from a yard out and scrambled for another 8-yard touchdown. Maldonado and running back Tito Moronta each scored rushing touchdowns as Mission was successful in converting in goal-to-go and short-yardage situations.

“We’re with each other all the time,” Maldonado said. “It’s a bond that we have, all of us. We just play out here like a family, the whole team. I just do what they ask me to do. Blocking, going out for routes, running the ball, whatever it takes.”

Through five games, the 4-1 Mission Eagles have tied last year’s win total and their arrow is pointing up as they prepare for their next District 30-6A challenge, a meeting with the Juarez-Lincoln Huskies in Week 7.

“This team is incredible; we can do things that a lot of people don’t expect us to do,” Gomez said. “We’re on the come up … we’re on the rise.”