When U.S. Representative Henry Cuellar heard that La Union del Pueblo Entero was protesting outside his Mission office, he was not surprised.

“They have a pattern of protesting here periodically,” Cuellar explained. “It’s what they do, I was not surprised one bit.” 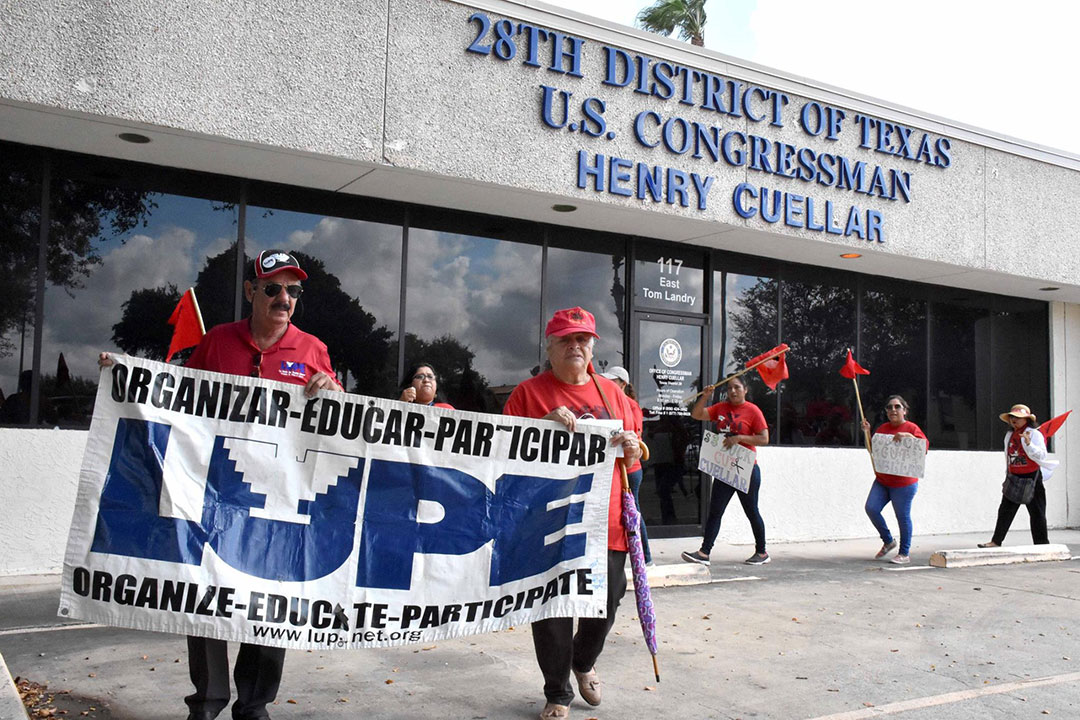 A total of 50 members from LUPE were outside Cuellar’s Mission office at 117 E. Tom Landry Street Thursday, Sept. 20 to protest Cuellar’s support of the AG and Legal Workforce Act, an immigration bill that would reform the existing agricultural guest-worker program by allowing it to address both seasonal and year-round laborers.

The bill, Cuellar said in a news release, would benefit migrant workers and other agricultural laborers.

The bill, however, could also result in a three dollar wage cut for farm workers, according to LUPE.

“Under the bill, the wage floor for Texas guest workers would drop from $11.87 per hour to $8.34 per hour,” the non-profit organization stated in a news release. “So foreign guest workers are getting a $3 wage cut.”

The protest eventually ended after a staff member promised that Cuellar said he’d be willing to speak to LUPE over the phone to discuss the bill. Cuellar, however, refused to meet with them and didn’t call them.

“I’ve always sat down with people and talked to them over any issues they have, but if you will yell and protest and say nasty things, then I will not spend time with you,” Cuellar said after the protest. “The moment they’ll start being more respectful, then I’ll be happy to talk to them.”
Though Cuellar said he is willing to meet with individual members of LUPE, he has no interest in meeting with its leaders due to the organization constantly protesting outside his office, he said.

“I’m sure they do a lot of good work and I thank them, but I disagree with their tactics. If they think by protesting and putting all these things on the press gets me to talk to them, they’re wrong,” Cuellar said. “They say I don’t support Dreamers because I voted for the appropriation bill earlier this year, they’ve accused me of wanting to deport freamers in press releases. They’re tactic is to attack, it’s a disservice to their members.”

For Cox, Cuellar’s attitude is a sign of disrespect toward his constituents.

“Cuellar was elected to listen to the voice of his constituents, that’s all we ask,” Cox said. “The issue we have with that is his staff knows perfectly well how many times we called his office, without a campaign or protest outside his office, to speak to him. He has brought this upon himself for not wanting to meet with his constituents.”

“It comes to a point where people concerned about certain legislation that will be harmful to his constituents and for him not to be willing to meet with us, is disrespectful,” Cox continued.

The AG and Legal Workforce Act, which was introduced to Congress last month, was referred to the Subcommittee on Immigration and Border Security the day before the protest and no other action has been taken on the bill since then, according to the Library of Congress website.