For Colonel Roman J. Cantu, a career with the U.S. Army is something he always strived for and worked toward, but he never imagined where it would take him.

Cantu was recently promoted to be Commander of the 5th Recruiting Brigade in the United States – putting him in charge of recruiting operations for the Army in all or part of 14 states. 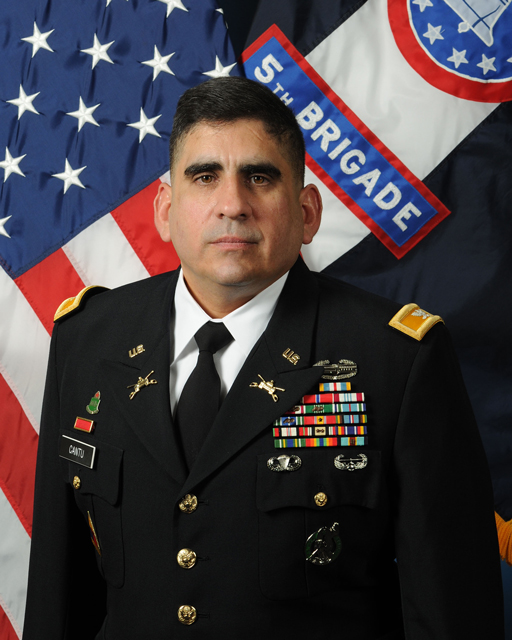 “I characterize it as everything from eastern California to Illinois, and Nebraska to Texas,&rdquo; Colonel Cantu said. “With that much ‘battle space&rsquo; as we say, close to 900,000 square miles of area, and being able to get out and really have that face-to-face dialogue with the soldiers in the areas that they work, it does present a challenge sometimes.&rdquo;

After 24 years in the military with many assignments around the world to his credit, Cantu now finds fulfillment in finding the “best and the brightest” young men and women the nation has to offer to serve as soldiers.

“It&rsquo;s worth it,&rdquo; Cantu said. “Recruiting the best and the brightest to be able to take up the mantle of guardians and sentinels of the nation is a very important mission, not only for the Army, but for the nation as well.&rdquo;

“I fully believe that the sons and daughters of this country are the most precious commodity, they are the future of the nation,&rdquo; Cantu added, saying he would be happy to serve however the Army asks him. “As they say, we shall see what the future holds.&rdquo;

A graduate of Mission High School and the University of Texas Pan-American, Cantu still calls the City of Mission his home base. Born and raised in the Valley, he is the son of Rafael and Dolores Cantu (educators in Mission for 35 years).

“Mission has always been my home and will continue to be my home,&rdquo; Colonel Cantu said. “Great family and friends always looking out and praying has always been very appreciated.&rdquo;
Cantu has three siblings: Rafael Jr., Elda and Lina. His wife Patricia, who he met in Reserve Officers’ Training Corps (ROTC) in UTPA, and his kids Alejandro and Eva keep him grounded, and have always been anchor points as they lived all over the world.

According to Cantu, the prayer and support from his entire family is what has given strength.

“[My family has given] continued love and support through multiple trying times,&rdquo; Cantu said. “The support of a soldier oftentimes extends past the immediate family, it&rsquo;s the entire community.&rdquo;

Patricia was awarded the Yellow Rose of Texas for her dedication to other military families and those in need, and Rafael Sr. and Dolores Cantu said her fortitude on the home front has allowed all of them to adapt wherever they go. Colonel Cantu would agree.

“An army wife is a special individual,&rdquo; Cantu said. “They&rsquo;re the ones who are oftentimes both the mother and the father, through training events or deployments, Patricia was the one that kept the family together, and I love her dearly.&rdquo;

His parents and brother spoke about seeing Colonel Cantu grow and succeed, and how they were proud of his accomplishments and experience.

“It is incredible,&rdquo; said Rafael Cantu, Jr., a teacher and coach at Veterans Memorial High School. “I tell my students all the time that he [Colonel Cantu] was sitting where they were some years back, and now he&rsquo;s a colonel in the Army.&rdquo;

Crediting several mentors who have served in the U.S. military, Cantu noted that being able to listen to advice from veterans and those with experience allowed him to find that call to serve the country, which he wanted to do since he was young.

“I had great mentors: Dr. Kenneth White, who was a World War II veteran, Carlos Martinez, who was my godfather and a Korean War veteran, Mr. Ciro Ochoa as well, another Korean War veteran, Mr. Tony Pena, a veteran of the European theater, and Mr. Lupe Gonzalez, a Vietnam veteran,&rdquo; Cantu said. “Between the discussions with them and watching them as they led their various organizations, whether it was in the education field or business, there was an understanding about what the Army was able to do for them.&rdquo;

“It was about how best to emulate the examples they set for the character, the competence and the commitment to their jobs,&rdquo; Cantu added. “I&rsquo;ve been doing that as best I could.&rdquo;

Cantu has served and lived in South Korea, Iraq, Afghanistan, Germany, and in several states across the U.S.

He currently resides in San Antonio, but still travels around the 14 states he oversees very often for work.

“It&rsquo;s a considerable amount of travel,&rdquo; Colonel Cantu said. “I&rsquo;m getting way more experienced at travelling through airports and staying in hotels than I ever have in the past.&rdquo;

Dolores and Rafael, along with the entire family, have kept Colonel Cantu in their prayers, often calling on their fellow parishioners at St. Paul&rsquo;s Catholic Church in Mission to pray for the colonel.

“We&rsquo;re very grateful to our church friends for praying for him,&rdquo; Dolores Cantu said. “Our friends at St. Paul&rsquo;s and El Mesias have taken care of him and all the soldiers with prayer. It&rsquo;s powerful.&rdquo;

Colonel Cantu wants young people all over the RGV and Mission to know that the opportunities are always out there for them.

“The Army is not ‘the&rsquo; way, the military is not ‘the&rsquo; way, but it does represent ‘a&rsquo; way to be able to make your dreams come true,&rdquo; Cantu said. “Whether it&rsquo;s the over 150 jobs that are available, the educational benefits that arise from a successful tenure in the Army, to just the overall fact of the leadership skills that are developed by an individual as part of the military, they helped me considerably throughout the course of my life.&rdquo;