The Progress Times honored two of Mission’s finest through the Citizens Awards at the Greater Mission Chamber of Commerce’s annual banquet last week.

Dedicated to highlighting those who selflessly serve others, The Progress Times awarded Maxilou Link and Brad Bentsen as First Lady of Mission and Mr. Mission, respectively. 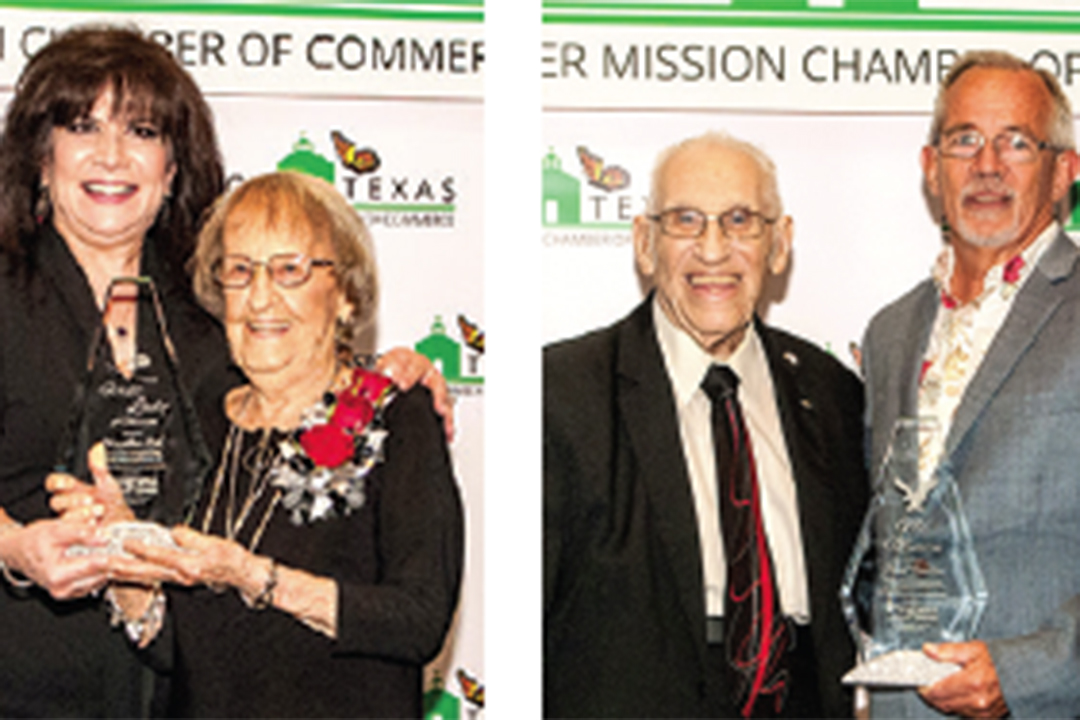 The awards were presented by Progress Times Publisher Dee Rendon at the annual banquet Friday, Oct. 5, 2018. Rendon said the banquet was a chance to recognize the commitment to volunteering that both individuals have, who have a combined 43 years of service to the city.

“Dedicated hearts like yours are not easy to find,” Rendon said in her speech. “Quality of caring for your fellow man is all too rare nowadays and yet you give your time and talents for anyone in need. In life, there are no guarantees, except that people like you will rise to the occasion and make this world a better place.”

Holding the event at the Mission Events Center, which opened last spring, was a dream come true for the city according to City Manager Martin Garza.

“For many years we’ve always had to look for different venues to hold events like galas, or the one we’re holding today,” Garza explained. “It’s a great center and we’re pleased with it, this is where the city will hold other annual events like our banquets and the Mayor’s Brunch.”

First Lady of Mission
The 2018 recipient is an artist, but not your typical artist. As president of the Upper Valley Arts League, a position she has held 16 times since moving to Mission, Link has cultivated the artistic growth in the community and has worked tirelessly to fill rosters, recruit teachers, and provide resources, exhibits and workshops for the betterment of the community. She’s been a volunteer and organizer for providing a space for both local and international artists and created the Legacy Art Project and worked to have 21 pieces of art donated which generated more than $40,000 to benefit Mission Regional Medical Center’s Sexual Assault Forensic Unit.

Link has also served on countless boards and committees in the city of Mission and was hailed as “a true work of art” by Rendon during her presentation.

“It was an awesome surprise,” Link, 93, said of the recognition last week. “When I first found out about the award, I didn’t feel like I deserved it and thought I remembered how I’ve worked really hard for the city and thought, ‘maybe I do deserve this.’ It’s been a lot of passion and hard work to promote the Valley. Words fail me. I’m so appreciative and grateful.”

Mr. Mission
A remarkable man with a tender heart and desire to do good, The Progress Times’ Mr. Mission is the city’s Parks and Recreation director, Brad Bentsen.

He is one of our own, having been born and raised in the city of Mission and belonging to First United Methodist Church, he and his wife-Janet Stuart-now attend McAllen’s The Family Church where he assists her in weekly services and serve as team directors of the church greeters.

He has always been a dedicated man, having joined the Mission Lions Club 26 years ago where he helped them with their annual banquet. He also volunteers with the Mission Boy Scouts where he currently serves Troop 84.

“He chooses to go above and far beyond,” Rendon said. “If there’s a problem, you won’t find him sitting at his desk, you’ll find him looking for a solution.”

In a statement prepared by Bentsen, he called the award a great honor and dedicated it to his family and God.

“I only do, what I do, because this is what God has gifted me with. I grew up serving and helping others,” he stated. “My wife Janet went so far to say that had I had been born with better dexterity I would have probably helped the doctors clean up the delivery table. This is an honor, and a pleasure. And yes, I am totally humbled to be considered but I do owe it all to my Lord.”

Chamber Choice
The awards were also a chance to honor several members for the Greater Mission Chamber of Commerce.

Three individual chamber members were also recognized at the event.

Mario Reyna, a project engineer with the city’s engineering firm Melden & hunt, was awarded the “Emerging Leader” Award. The recognition highlighted his engineering experience where he’s been involved in several projects such as the expansion of Mission’s north water treatment plant.

Sarah Hammond, of Atlas Electrical, Air Conditioning & Refrigeration, was recognized as executive of the year.
As co-owner of the company, Hammond speaks throughout the world and the region, empowering female professionals and business leaders.

The Chamber also recognized Mission’s Deputy City Manager Aida Lerma for Excellence in Government. Lerma previously served as CEO for the Greater Mission Chamber of Commerce before being hired as the city’s public relations director and then was made deputy city manager last year. She oversees what she calls the “quality of life department” which includes the Mission Historical Museum, Speer Memorial Library and more.