District play is winding down on the volleyball court as some Big 7 teams are preparing for their final run at a district title and playoff spots, while others are looking to turn things around for a strong finish to the season. 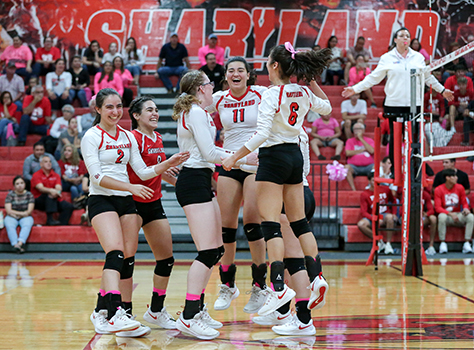 “You always want to make history and we’ve always been battling with them,” said Sharyland Head Coach Raul Castillo. “I told the girls this is our year, we have to take it from them. If we don’t, they’re going to come to our court and beat us.”

The Lady Rattlers and Lady Diamondbacks entered the game with 7-2 district records in what was a battle for the second seed with just four games remaining, and after Sharyland swept Pioneer on the road in their first meeting on Sept. 15, the Diamondbacks were looking to even the score.

Sharyland’s Estefania Hinojosa and Tristen Maddox combined for 33 of the Lady Rattlers’ 38 kills and set the tone early, while Ximena Chapa posted 26 digs and Aydee Hinojosa dished out 17 assists.

“I just really wanted to show my team that we can do this and we can break history,” Maddox said. “It’s possible to do anything playing together. I think we can be unstoppable.”

The Lady Rattlers have four games remaining and they’ll have the chance to avenge both of their district losses on their homecourt as they host the unbeaten Mission Veterans Lady Patriots (10-0) on Tuesday, Oct. 16 and PSJA Memorial (5-3) on Tuesday, Oct. 23.

“We’re feeling more confident and we’re excited for the big games coming up,” said Estefania Hinojosa. “I’m excited, we’re going to fight hard because we want to give them a good match.”

Pioneer
The Lady Diamondbacks have worked their way to a 7-3 district record, good enough for third place and on pace to lock up one of four playoff spots. A team that lost talent from a year ago has found new senior leadership while receiving big contributions from freshmen.

Senior Daizy Coronado, junior Daniela Alvarez and the freshman duo of Thalio Ochoa and Natalie Reyes have led the way for the Lady Diamondbacks, knocking off lesser opponents while chasing the top two.

Pioneer’s three district losses come at the hands of Sharyland (2) and Mission Veterans, and the Lady Diamondbacks have one more crack at the champion Lady Patriots at 1 p.m. Saturday, Oct. 13 at Mission Veterans High School.

Two Lady Patriots, seniors Jackie Howell and Makenzie Gerlach, have the opportunity to close out their four-year varsity careers without a single district loss in that time.

While the Lady Patriots have bouts with Sharyland, Pioneer and PSJA Memorial left on the schedule, their eyes are on a perfect finish and a deep playoff run.

Keep your eyes out for a feature on the Lady Patriots in next week’s issue of the Progress Times.

Palmview
The Palmview Lady Lobos find themselves in a new district but have struggled to gain any ground. In a district with volleyball heavyweights like Mission Veterans, Sharyland and Pioneer, the Lady Lobos have fallen to 0-10 and with just four games left, Palmview has a chance at putting a W in the win column.

District 30-6A
The three Big 7 members of the Valley’s toughest district are having a rough go through 30-6A action. The Mission Lady Eagles have played the best of the three as they sit at 4-6 in district after picking up a win over Juarez-Lincoln on Tuesday night. The loss sent the Lady Huskies to 0-10 on the year, while the La Joya Lady Coyotes hold a 1-9 record. A strong finish to the season can lead to a productive offseason as the teams look for something to build on to close 2018.