MCISD decided to give an extra reward to their Texas Teacher of the Year at a board meeting held this week.

The Mission Consolidated Independent School District recognized Rhonda Peña, the newly awarded Texas Elementary Teacher of the Year on Wednesday. After taking a picture with the board of trustees and superintendent, Craig Verley, the Director of Public Relations and Marketing, presented Peña with a giant check from the district worth $2,000, to be used for her personal classroom needs and wants. 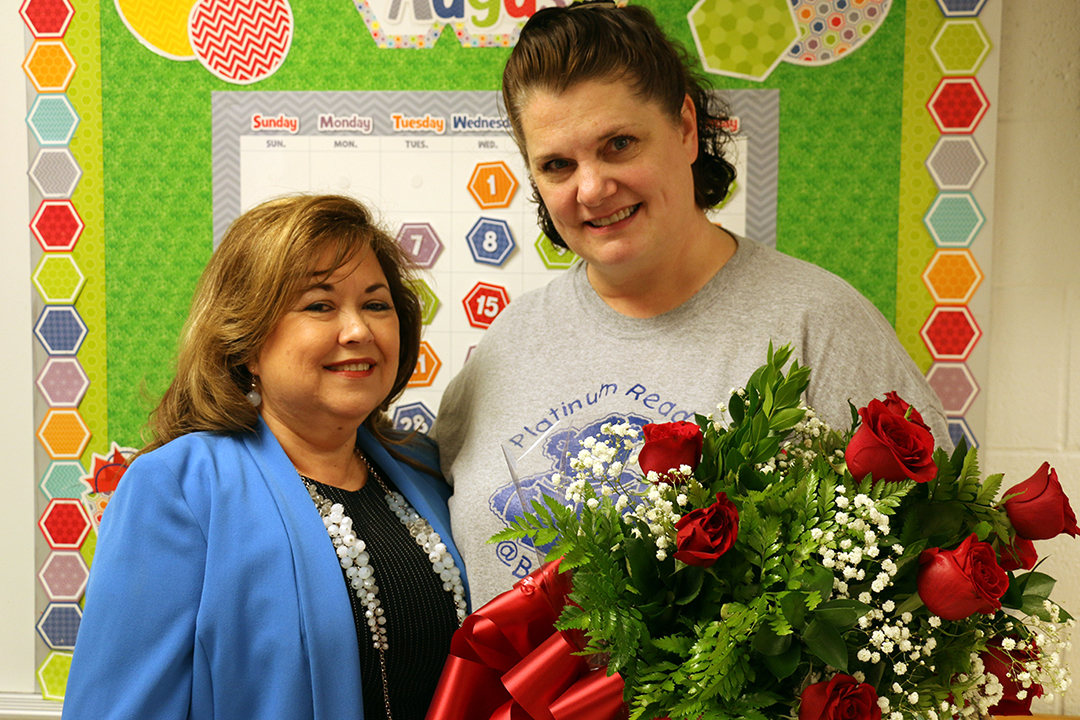 Pe&ntilde;a is the first teacher from MCISD to win the Texas Teacher of the Year award.

During the superintendent&rsquo;s report, Dr. Carol Perez spoke about the recent implementation of an attendance incentive for the schools in MCISD.

For this first six weeks, campuses had to potential to earn $4,000 for their campus budget. Although the incentives have just begun, the district has seen an increase of average attendance by about 1.06 percent.

“Last year for the first six weeks, we had 95.74 percent,&rdquo; Perez said. “This year, 96.80 percent, which totals in many, many lessons that were gathered. 196 more students had perfect attendance this school year.&rdquo;

Perez congratulated the campus staff and parents for contributing to the increased attendance in MCISD.

“That means that we were able to save additional dollars in tutorials, summer school and so forth,&rdquo; Perez said. “Plus, the state will reward us for that 1.06 [percent] with approximately $170,000. That&rsquo;s not counting the additional revenues we get for special populations.&rdquo;

The superintendent added that the additional $170,000 will go into giving back to the children by creating “greater, better programming,&rdquo; and to the staff in “greater and better salaries.&rdquo;

The incentives will be broken down into different levels as to how they are to be used. 75 percent of the incentive will go toward students, with campus principals determining on-site how it is spent in that regard.

“Anything that is going to impact and hook children into coming into school,&rdquo; Perez said. “The other 25 percent is to reward the staff because of the fact that they&rsquo;re working collaboratively.&rdquo;

The board of trustees also spent some time debating on the facility fee rental schedule they maintain for their non-varsity stadiums, particularly Veterans Memorial High School. After having the financial and athletic departments look over the rental fees they offer for non-profit organizations as compared to other districts, Petra Ramirez still felt the proposed $5,000 for four hours was too costly.

MCISD usually rents their facilities out to non-profit organizations when they are need them and the district does not have anything scheduled. The board wanted to ensure that not only were the stadiums taken care of and safe, but the majority of students utilizing the facilities were MCISD students.

It was suggested that there be some sort of tiered pricing based on the hours the facility would be used, the percentage of MCISD students among those participating in that event and the additional costs of security and possibly insurance.

The board could not come to a consensus on whether the cost should be $1,200, $3,000 or $5,000. They requested the financial department look at the cost comparisons again, this time with districts similar in size to MCISD, and the item was tabled.

However, after executive session a motion was made by Jerry Zamora to delegate authority to the superintendent to finalize the fee schedule. It was seconded by Sonia Trevi&ntilde;o, and the vote was unanimous.

Dr. Perez indicated it would likely take a few days to further analyze and determine the costs in order to finalize the fee schedule.