Minutes before the La Joya Housing Authority board meeting on Monday, a short man wearing a cowboy hat walked through the door. 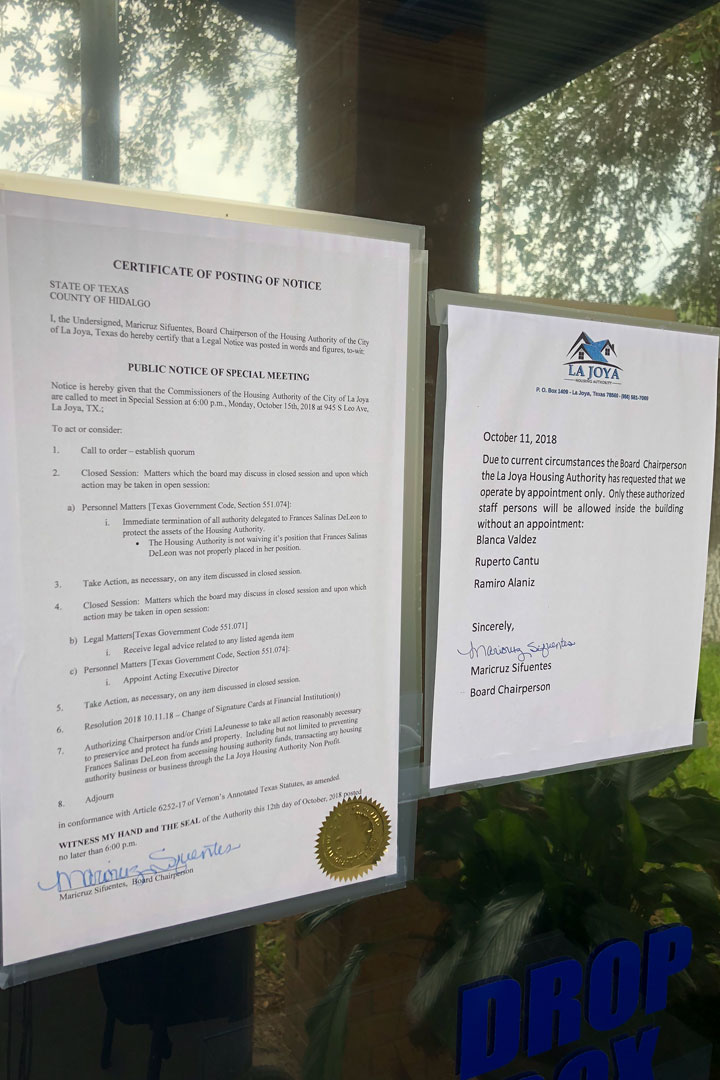 “As a result of the actions and anticipated actions by the La Joya Housing Authority, Frances Salinas filed suit against her employer,” according to a statement released by her attorney, Dennis Ramirez of Donna, who added that she requested the restraining order “to maintain the status quo and ensure no further violations of the Texas Open Meetings Act. Ms. Salinas looks forward to her day in court and will allow the legal process to run its course and protect her, the La Joya Housing Authority and the citizens it serves.”

After federal agents arrested Executive Director J.J. Garza on wire fraud charges in September 2016, the board struggled to find a competent replacement.

Frances Salinas, the board chairwoman, started working closely with the remaining staff. In February 2017, she resigned from the board and became the interim executive director.

Just a few months later, the board asked the U.S. Department of Housing and Urban Development for permission to make Frances Salinas the permanent executive director.

Mayor Salinas appoints the five-member housing authority board, which hires the executive director. HUD considered the arrangement a clear conflict of interest and refused to pay Frances Salinas with federal money.

HUD rejected requests for a waiver in May 2017, August 2017 and January 2018. With support from the board, Frances Salinas kept pushing for the permanent position.

“I had no issues with her,” said former board President John Pena. “She was doing her job.”

Privately, though, Pena began to worry.

In January, when HUD rejected the third request for a waiver, Pena wrote a letter.

“Mayor Salinas, I am concerned that if we prolong this matter, HUD might and can take over La Joya Housing Authority,” Pena wrote. “Please advise.”

Pena said he wrote the letter but never sent it.

The Progress Times obtained a copy of the letter from a source who provided the document on the condition of anonymity.

Three months later, HUD dispatched a team to La Joya. The team conducted a comprehensive review and discovered a litany of problems.

“Overall, we have serious concerns on how the Authority is being managed by the staff and overseen by the Board of Commissioners,” according to a June 29 letter from HUD San Antonio Public Housing Director David Pohler. “The Authority will need to develop a recovery plan to improve their physical condition and financial viability or consider transferring the program to a neighboring Agency with the administrative capacity and assets to operate a viable program.”

In 2016, when Frances Salinas served on the board, members traveled to San Antonio for a conference.

“Specific items that we deemed unreasonable, and areas of waste and/or abuse, occurred when several board members and the executive director, all attending the same conference at the same time, drove separate vehicles and were reimbursed mileage, resulting in 3 to 5 time the normal cost of a single vehicle used to transport these individuals to the conference,” according to the 2016 audit. “In addition, these individuals received per diem amounts for attending a conference with no documented plan. Board minutes indicate they were to provide receipts and re‐pay any excess per diem received, however there is no documentation of this occurring.”

After she became the executive director, auditors discovered additional problems.

The housing authority “did not effectively enforce its rent collection policy,” failed to track hours worked by employees and couldn’t find any meeting minutes since Frances Salinas became the executive director.

Sifuentes and Garces Valdez, the chairwoman and vice chairwoman of the board, said they were blindsided by the information.

“I’m almost 100 percent sure that it’s political,” Mayor Salinas said, adding that Frances Salinas is running for a seat on the school board. “I really think it might be coming from the school district candidates.”

Frances Salinas didn’t attend the meeting on Wednesday. On Thursday, however, she wrote a letter to Mayor Salinas, claiming she didn’t post the agenda 72 hours before the meeting.

In the letter, Frances Salinas said Sifuentes approached her on Oct. 7 and asked her to post an agenda for Wednesday.

“While under pressure to create and expedite our meeting, I lost track of time and advertised the Certificate of Posting in less than 72 hours, which is required by law. Therefore being a clear violation of the Open Meetings Act, constituting a voided meeting,” according to the letter, which is dated Oct. 11. “Mayor Salinas has confronted me with the City’s screenshot of myself on Monday at approximately 8:45 AM in front of the La Joya City Court room doors attempting to advertise our posting, in which I admitted to and can clearly be identified”

That made the decision to fire Frances Salinas vulnerable to a legal challenge.

The board called an emergency meeting Thursday to ratify the decision but canceled at the last minute. It posted a new meeting agenda for Monday, which included: “Immediate termination of all authority delegated to Frances Salinas DeLeon to protect the assets of the Housing Authority. The Housing Authority is not waiving it’s position that Frances Salinas DeLeon was not properly placed in her position.”

On Monday, with the board preparing to fire her again, Frances Salinas told a different story in the affidavit attached to her lawsuit.

In the affidavit, Frances Salinas said Sifuentes approached her on Oct. 8 and asked her to post the agenda for Wednesday.

“I informed the Chair that this meeting violated the Texas Open Meetings Act (hereinafter referred to as “TOMA”) because all notice of meetings require seventy-two (72) hour notice. However the Chair insisted that I post the notice of meeting,” according to the affidavit, which is dated Oct. 15. “Prior to the meeting, I advised the Chair and other Housing Authority members that the meeting was in violation of the TOMA, that I would not attend and that they should not proceed.”

Asked about the discrepancy, Ramirez, the attorney who represents Frances Salinas, said he would follow up Tuesday.

“I just think it’s unfortunate because at the very end the ones who are going to be suffering are our tenants, our authority,” Garces Valdez said. “And as we’ve mentioned before, this is not about anything but looking out for the best of the La Joya Housing Authority and our tenants.”