For the survivors, friends and families present on Saturday, raising awareness and money to contribute to the fight against breast cancer was the main goal of the morning.

Last Saturday, residents from all over the Valley gathered at the Mission Event Center for the inaugural American Cancer Society Making Strides Against Breast Cancer Fundraising Walk. 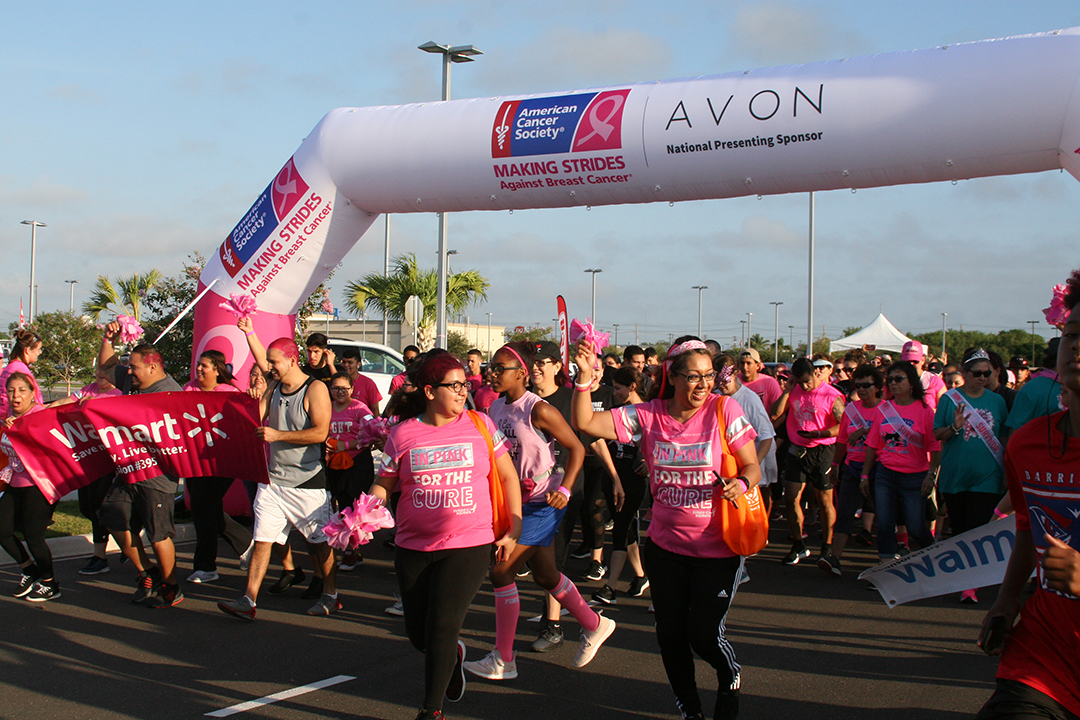 750 people participated in the walk itself and as of Wednesday of this week, they have raised $18,342. Fundraising is still ongoing for October, and people are working toward donating $50,000 from the Rio Grande Valley area.

The walk started at the Mission Event Center at 8:30 a.m., and was about the length of a 5K. Registering was free, and people could make donations voluntarily.

Sponsors of the walk in Mission, such as H-E-B, Chick-fil-A, Avon and Kendra Scott all had booths set up in order to offer prizes, food and opportunities to donate. This was the first Making Strides event in the area, with the closest one happening annually in Corpus Christi.

April Chapa, the Senior Community Development Manager for the American Cancer Society in Mission, said that the event was a moving example of how people united can make huge progress toward a world without breast cancer.

“I really thought that the Rio Grande Valley needed a big breast cancer awareness walk,&rdquo; Chapa said. “I wanted people to come out and celebrate that they&rsquo;re a survivor, remember those that we&rsquo;ve lost and let people know more about this disease.&rdquo;

Excluding skin cancers, breast cancer is considered the most frequently diagnosed cancer in women, and the second-leading cause of cancer death in women. According to a press release from the American Cancer Society citing their Cancer Facts and Figures 2018, “more than 266,000 women in the United States will be diagnosed with breast cancer and more than 40,000 will die from the disease this year.&rdquo;

“I hope that it [the fundraising walk] has a big impact and that people see what the American Cancer Society is doing in our community,&rdquo; Chapa said. “We put in a lot of money towards research for breast cancer, towards our community for wigs, free rides to treatments for patients and all the free services people don&rsquo;t know about.&rdquo;

Mission City Council member Ruben Plata was present at the event, and spoke on behalf of the city before it began.

“We are here on behalf of the city to thank you and show our support,&rdquo; Plata said. “This is what Mission is all about, this is great for our community and we truly support the American Cancer Society.&rdquo;

Jennifer Hernandez, a member of the Kappa Delta Chi sorority at UTRGV, took part in the walk as part of the group&rsquo;s philanthropic efforts in the community. She found it to be an important event to participate in.

“It shows support,&rdquo; Hernandez said. “I&rsquo;m a caregiver for a mom who had breast cancer for about seven years. It shows a lot of support and brings a lot of awareness, that way people can get aware as to what is going on and who can be affected.&rdquo;

Rosalinda Mendez and Dora Rodriguez-Jimenez, two survivors of breast cancer, were there primarily to increase awareness and encourage people to get screened and checked regularly.

“It&rsquo;s very important that you get your annual mammograms,&rdquo; Mendez said. “Even though a lot of people don&rsquo;t think that they&rsquo;re important and they don&rsquo;t always find the cancer, that&rsquo;s one preventative measure that you can go to, and you&rsquo;ll have a better chance of getting it caught earlier.&rdquo;
“I&rsquo;m here to support everybody,&rdquo; Rodriguez-Jimenez added, noting that one of her sister-in-laws passed due to breast cancer, and that one of her sisters is a survivor, like her. “I&rsquo;m here for all of my family. We need more awareness, so that maybe we can save more people.&rdquo;

Vicky Johnson, a friend of the two ladies, was also a participant, along with her dog, Ms. Bentley. She thought it was important to be supportive and stand up to help in the fight against breast cancer.

“I also have a sister that is a two-time breast cancer survivor,&rdquo; Johnson said. “She lives in Austin, but I&rsquo;m here supporting her. It&rsquo;s very important to gain awareness about breast cancer.&rdquo;

The ladies said that these kinds of events were needed all over the Rio Grande Valley.

“There&rsquo;s a lot of cancer everywhere,&rdquo; Mendez said. “Especially here in the Valley, we have such a variety of cultures that we need to bring awareness to.&rdquo;

“A lot of people, especially our older people, are not used to getting mammograms and things like that, so we need to bring awareness to that,&rdquo; Mendez added. “Getting it detected early makes the difference between how much chemo[therapy], how much radiation and the treatments and everything that&rsquo;s needed.&rdquo;

For more information on how to contribute or make a donation to the walk in the RGV, their website is MakingStridesWalk.org/RioGrandeTx. For free breast cancer information and resources, the American Cancer Society can be visited online at cancer.org or called at 1-800-227-2345.