Week Seven of Valley high school football couldn’t have gone any better for the seven teams from the Mission, Sharyland and La Joya school districts, the Big 7. That’s because the five of these teams that faced off against non-Big 7 opponents all won their games. As for the other two, they went head-to-head against each other. That made it a given that, barring a tie, one would win and one would lose, which is what happened, resulting in a week in which six of the seven Big 7 teams emerged victorious.

While having a perfect week like that is hard to top, the fact that going into their Week Eight games, the top six Big 7 teams all have winning records, both overall and against their district opponents, could very well be unprecedented. Furthermore, those same six teams have won 17 of their 21 district match-ups! That, is an absolutely amazing record! 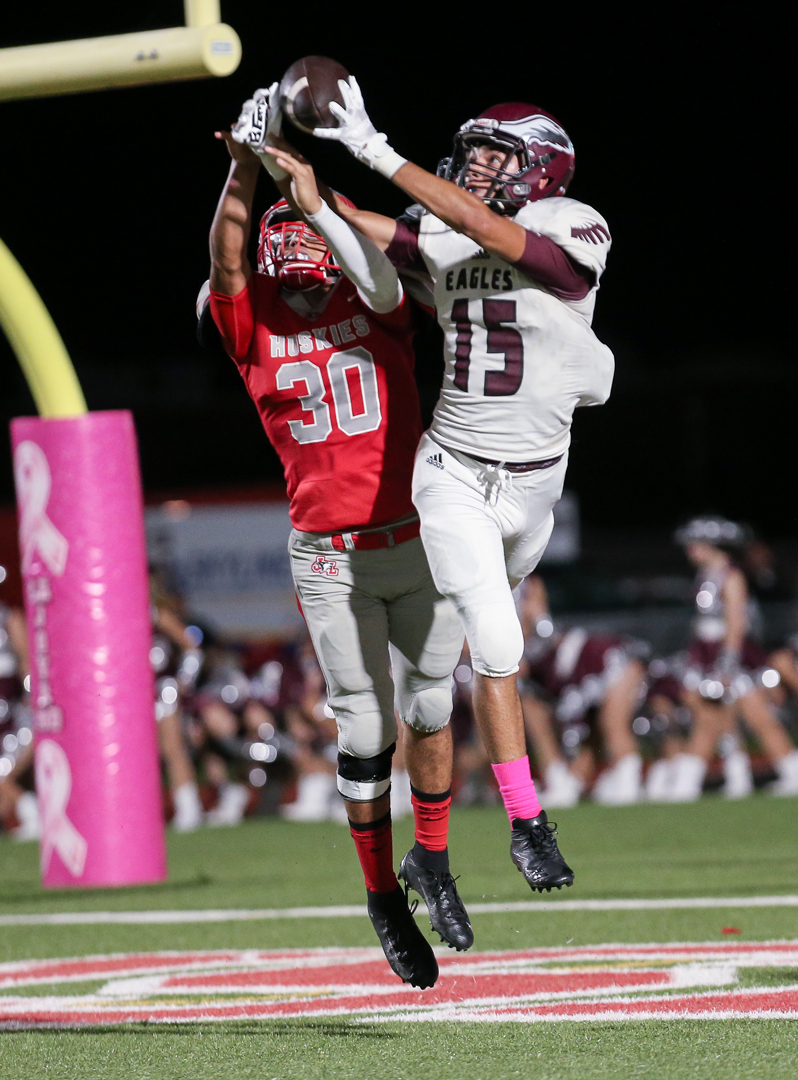 While three of the Big 7 teams are undefeated in district play, the Mission Veterans Patriots are the only 5-0 team at this point in the season. That is partly due to the fact that they are one of only two Big 7 teams that have played five district games thus far. The Patriots are also the only Big 7 team to have already played their Week Eight game as they hosted 2-3 (2-4 overall) PSJA Southwest last night.

That leaves four games involving Big 7 teams on tonight’s schedule. With the Sharyland Rattlers at Pioneer Diamondbacks game being previewed separately as our game of the week, we will take a look at the remaining three games here.

Juarez-Lincoln Huskies at La Joya Coyotes
The 0-3 (0-6 overall) Juarez-Lincoln Huskies are the only Big 7 team with a losing record. However, they played the Mission Eagles extremely tough last week, losing by only two points, 16-14. In that game, there was a controversial call that Juarez-Lincoln head coach Tomas Garcia blames for the loss. According to Garcia, the officials threw a flag, picked it up then changed their mind after the Huskies had apparently forced a turnover on downs on a 4th-down incompletion for the Eagles.

As for the 2-1 (5-1 overall) Coyotes, they’re coming off a 28-0 win over the McAllen High Bulldogs. However, their one point win over McAllen Memorial in Week Six, the Mustangs first district loss in over four years, has the Coyotes in the thick of the District 30-6A race as they find themselves in a four-way tie for second place behind the 3-0 PSJA Bears. The fact that they have yet to play the three teams they’re tied with means that Coach Reuben Farias’ Coyotes control their own playoff destiny as they head into the home stretch of their season.

PSJA North Raiders at Mission Eagles
Having survived a scare against the winless Juarez-Lincoln Huskies last week in which they needed a last second field goal to secure their 16-14 come-from-behind victory, the 2-1 (5-1 overall) Mission Eagles will be hosting the 2-1 (3-3 overall) PSJA North Raiders tonight at Tom Landry Hall of Fame Stadium. The Raiders, who are coming off a 38-22 win over the Nikki Rowe Warriors last week, are one of the three teams the Eagles are in a four-way tie for second place in District 30-6A with.

In last week’s game, Mission starting quarterback Damian Gomez had to be taken off the field in a stretcher and put into an ambulance as he suffered a broken collar bone. As a result, freshman Jeremy Duran was called on to lead the Eagles offense the rest of the way against the Huskies. Duran completed eight of 13 passes for 51 yards, and while he led the Eagles on the drive that resulted in the game winning field goal with only 14 seconds remaining in the game, those were the only points the Mission offense was able to put on the board after Gomez’s departure.

How long Gomez will be out as a result of his injury is not known at this time but Duran will most likely be the Eagles’ starting quarterback until then, according to Mission Eagles’ head football coach Koy Detmer.

Palmview Lobos at PSJA Memorial Wolverines
The 3-2 (3-3 overall) Palmview Lobos will be traveling to PSJA Stadium tonight to play the 1-4 (1-5 overall) PSJA Memorial Wolverines. The Lobos are coming off a bye week so they’ve had two weeks to recover from their 35-14 loss to the 5-0 (5-1 overall) Brownsville Pace Vikings. In that game, the Lobos’ defense gave up 250 rushing yards on 39 carries for a 6.4 yard per carry average.

As for the Wolverines, they are coming off their only win of the season, a 21-17 victory over the 1-4 (1-5 overall) Rio Grande City Rattlers.

Going into tonight’s game, the Lobos are tied with the Donna Redskins for fourth place in the ten-team District 16-5A-1. Having lost their head-to-head game against the Redskins, and with the 5-0 Mission Veterans Patriots and the 4-1 Brownsville Veterans Chargers still ahead on their schedule, tonight’s game against the Wolverines is a must-win for the Lobos if they are going to keep their playoff hopes alive.