The Lady Patriots have been the definition of perfect in district play over the last four years.

Seniors Jacqueline Howell and Makenzie Gerlach have been on varsity since their freshman seasons in 2015. Fast-forward four years later and the senior pair of Lady Patriots have amassed a 56-0 record in district play, and with two game’s left, they can become the first in program history to go undefeated in district play in four consecutive years. 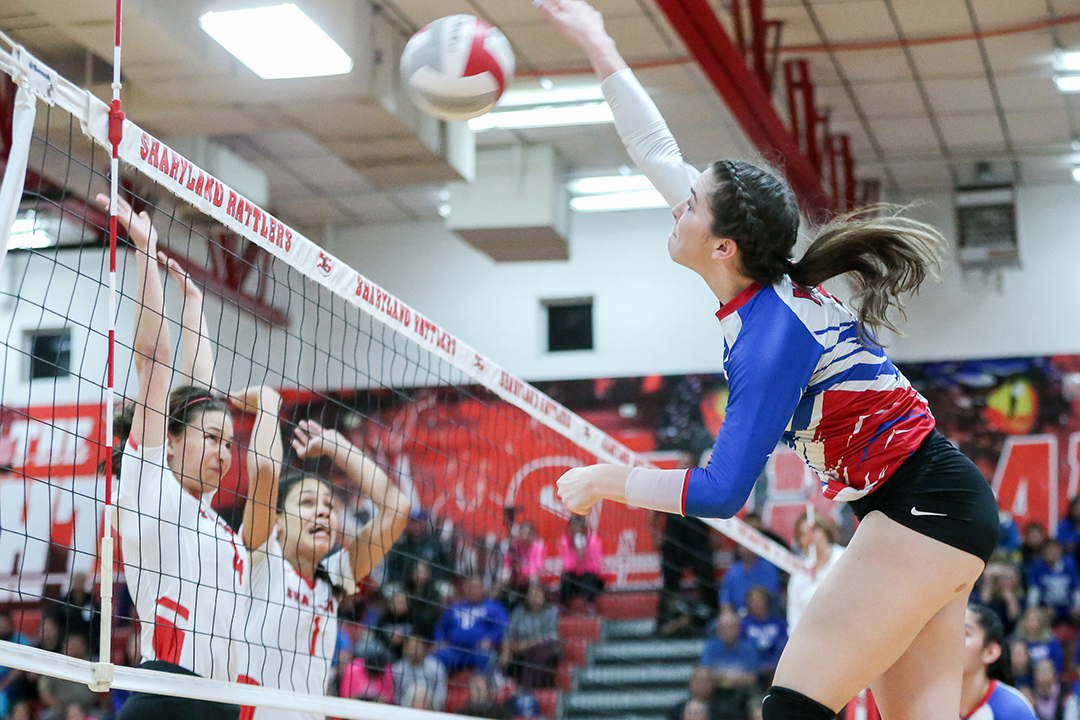 “It’s really important because Jackie and I would be the first ones to go completely undefeated in district,” Gerlach said. “It’d be pretty cool to be remembered as the group that went undefeated for four years. It’s my senior season and one of the best teams I’ve played on all four years that I’ve been here.”

Head Coach Diana Lerma and her girls set the bar high at the beginning of the season and have followed through in accomplishing most of their goals, but now there’s just two left: finish district play unbeaten and to push the Lady Patriots (34-3, 12-0) in the playoffs further than they’ve gone before.

“These girls are very goal-oriented,” Lerma said. “Jack and Mak will go not just four years winning district titles, but four years undefeated. One of the senior groups before went 52-1, they lost one game their freshman year; these girls want to finish the season perfect.”

With playoffs around the corner, the Lady Patriots are playing their best ball, and the rankings prove it. Mission Veterans is ranked No. 3 in the 5A Texas Girls Coaches Association Poll and No. 14 according to MaxPreps.

The Lady Patriots aren’t just earning team recognition either. Howell, the 5A leader in kills (618), recently earned MaxPreps/AVCA Player of the Week Honors in Texas for the week of Oct. 1 through Oct. 7 after compiling 48 kills, 31 digs, 16 receptions, three aces and one block in just three games.

“When I found out, I was waking up about to get ready for practice, and my friend showed me and I reread it and reread it, and I was like no way, for all of Texas? Honestly, I almost cried when I saw that, to get recognized in the whole state of Texas because there’s lots of good players,” Howell said.

The Lady Patriots have a three-headed monster at the net as Howell (.502), Gerlach (.396), and Kassandra Lerma (.396), Coach Lerma’s daughter, all rank inside the top 8 in 5A hitting across the state of Texas.

“Most teams have one big hitter, but we have three big hitters in the Top 7 or 8,” Howell said. “We’re like a three-headed beast coming at you. And for us to have that many kills to be ranked that high, we only go three sets with everyone, other teams go five sets. We’re sweeping and to still have three girls up there ranked, that’s unheard of.”

Now, just two games stand between the Lady Patriots and their fourth-straight perfect district season: Saturday, Oct. 20 at PSJA Memorial and Tuesday, Oct. 23 at home against Roma. Mission Veterans swept both opponents earlier this year in their first meetings, giving the Lady Patriots a good shot at finishing unbeaten in district while extending their state-leading 30 game winning streak.

“I’m excited, I’m motivated to finish and know that we’re going to go undefeated for another year,” said Howell. “We’ll be the first girls to go through the program all four years, and if we get to do that we’ll be real proud. And playoffs too, we have our playoff bracket already set up in our locker room, so we’re ready.”

Coach Lerma is confident the team will finish district perfect, but she’s always wanted her girls to aim higher. With arguably the strongest team in Mission Veterans volleyball history, they’re aiming at a state championship.

“They have to be not afraid to say going to state, because I think they’ve done everything else,” she said. “They’ve gone through the bonding, the chemistry is all there, all that’s left is to follow through and set their goals so we can follow the next year and the next year. They’ve left their mark.”