A little rain and cold weather wasn’t going to stop the community of Palmhurst from spending Tuesday connecting with local law enforcement and building relationships as the Palmhurst Police Department and the City of Palmhurst hosted their 7th annual National Night Out.

Church of Christ in Mission welcomed all ages and different law enforcement agencies to celebrate the night with live music and performances. Different organizations use this opportunity to raise funds by selling funnel cakes, spiro papas, tacos, drinks and other delicious snacks. 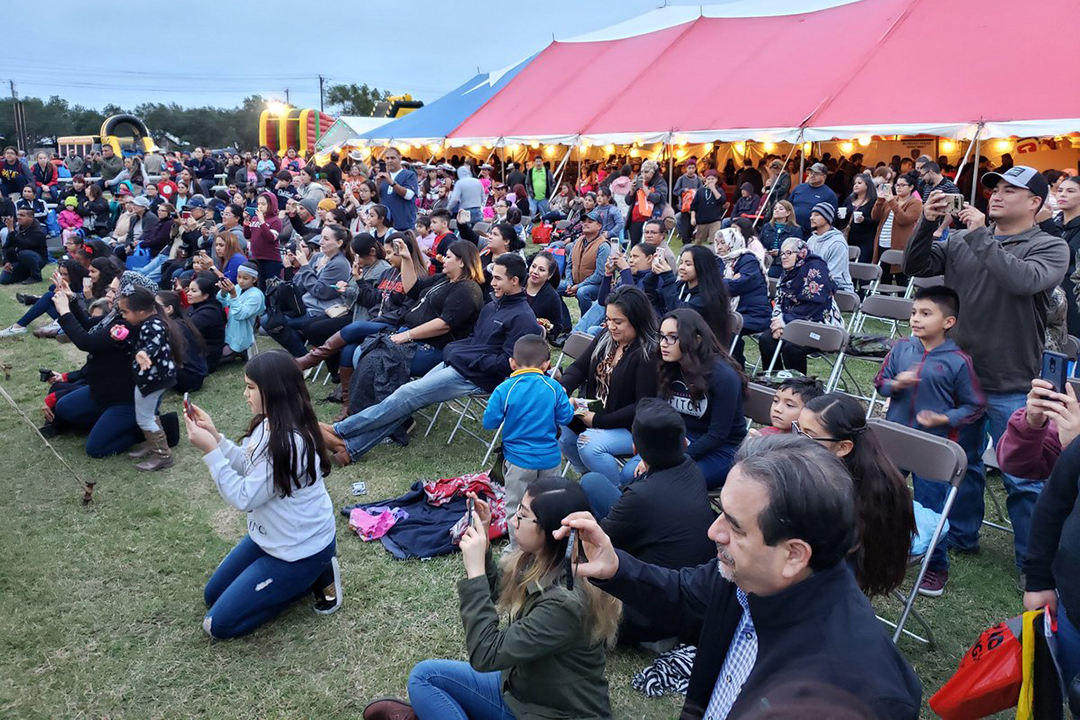 Those in attendance had the opportunity to ride on a trolley train around the walking track, play different games available and/or rides, free of charge. And if that wasn&rsquo;t enough, they also played a movie in the park (“Casper, the Friendly Ghost&rdquo;). The City of Palmhurst administration and staff was more than prepared by providing chairs and tables set up under tents with standing heaters for the crowd to sit and enjoy their food while watching their movie.

Palmhurst&rsquo;s Chief of Police Michael Anthony Vela, who has held the position for more than nine years, said the reason for the City of Palmhurst and Palmhurst Police Department to host National Night Out is because it helps build relationships and helps open up lines of communication with the community.

With nearly 1,000 people in attendance, Corporal Robert Rodriguez, the coordinator for Mission Crimestoppers who has been with the Mission Police Department for more than 17 years, said National Night Out is an important event for every community because it allows the public to see a different side of law enforcement.

“This is the time when law enforcement can come together with the public and just basically say hi to each other,&rdquo; Corporal Rodriguez said. “Normally, they call us when they&rsquo;re having a bad day or something bad is going on, but this is a day when you can come out, you can say hi and ask us any questions you want. At the same time, we give the public a lot of information about different services the city and the county has to offer. It&rsquo;s a different side of law enforcement that the community gets to see.&rdquo;

Mariachi, folklorico dancers and bands from local junior highs and high schools performed for a big crowd while different law enforcement agencies had tables where they answered questions and gave away school supplies and goodies to children and visitors.

Vela, who has worked for the Palmhurst Police Department since its inception, said he enjoys National Night Out because it shows the unity between the different agencies and the communities they protect and serve.

“I think it&rsquo;s really great to show that it&rsquo;s not just one agency or two, it&rsquo;s all the agencies as one,&rdquo; Chief Vela said. “We all work together, whether it&rsquo;s local, federal or state, we all work together as one, and just to show people that we&rsquo;re here for them. I love it because this only happens once a year.&rdquo;

The Mission Veterans Memorial High School Cosmetology students were just one of the groups giving back as they were styling and cutting hair of boys and girls who went home with a brand new hairdo.

The connection between the community and law enforcement is an important one that should be seen as a team, said Rodriguez.