For the students at Mims Elementary, the implementation of Mustangville means elections, participation and an understanding of some of the inner workings of a city.

Recreating the local city government of Mission, Mims Elementary recently swore in the new group of leaders for Mustangville – the school’s small city. The Mission Consolidated Independent School District has several campuses that model city government departments, positions and programs such as the mayoral seat, the city council, the post office and the police department made out of the student populous. 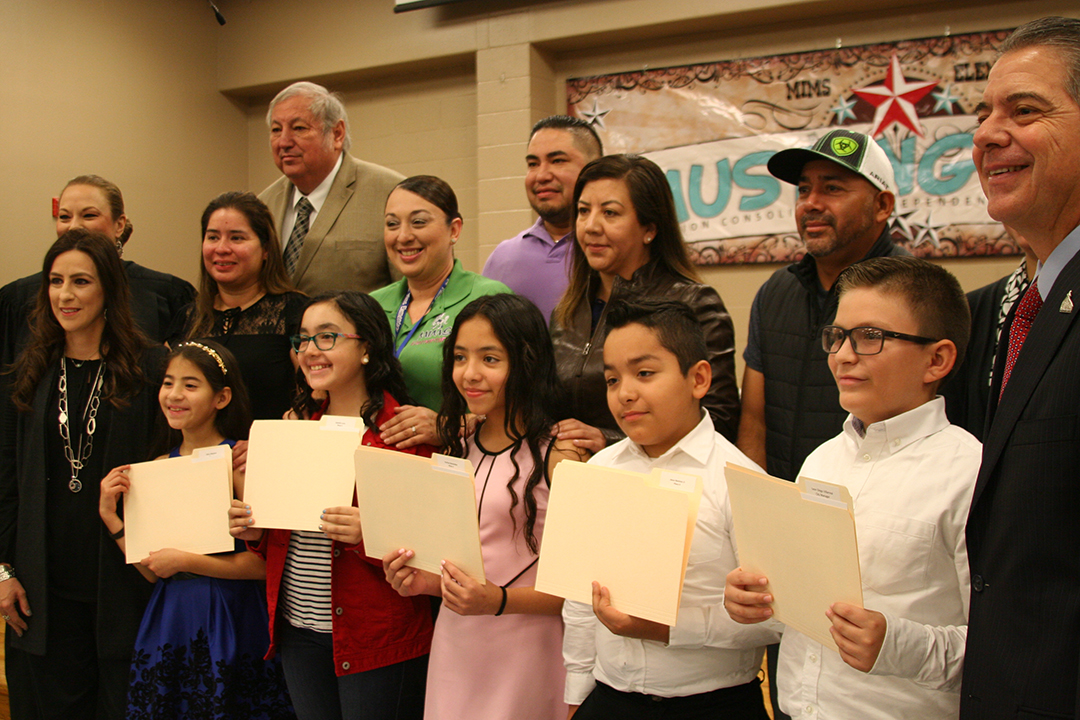 The entire school and staff were present on Friday morning, and parents seemed eager to take pictures and participate in the special event.

O&rsquo;ca&ntilde;a said that they were excited to invite the newly elected student officials to the city hall sometime in the near future in order to allow the children to shadow the actual leaders in their respective positions.

“We&rsquo;re in the planning stages,&rdquo; O&rsquo;ca&ntilde;a said. “It&rsquo;s not only Mustangville, but all the other schools&rsquo; cities as well, so they can see the real thing.&rdquo;

O&rsquo;ca&ntilde;a said it was critical that students have practical applications they can take with them.

“It&rsquo;s extremely important that children understand the process of how city government runs,&rdquo; O&rsquo;ca&ntilde;a added. “A lot of local decisions are made that impact them. Technically, we are representing them.&rdquo;

MCISD School Board President Petra Ramirez was also present, and spoke about the importance of teaching students how to be successful leaders in the future.

“It is a great learning experience for all of you,&rdquo; Ramirez said. “You [the students] are our priority. This is what we work for, and that&rsquo;s how you become civic leaders or organizations leaders – we want to provide the best for you.&rdquo;

Judge Patty O&rsquo;ca&ntilde;a-Olivarez swore in the children at Mims Elementary for the fourth time, and the school used official language in order for the students to get a real handle on how it works in reality.

Started in 2015, Mustangville “represents commitment to embrace [the] district&rsquo;s vision in preparing students to serve as successful citizens in their community,&rdquo; according to MCISD. Mims Elementary Principal Yvonne Zamora said the entire student population was very excited, and that the conduct of those running was exemplary.

“The candidates were very gracious with each other,&rdquo; Zamora said. “I&rsquo;m very pleased with the campaigns that they ran, we learned a lot of lessons and a lot of skills, so I&rsquo;m very proud.&rdquo;