The Mission Veterans Memorial Patriots (7-1, 7-0) prevailed 48-35 over the Pace Vikings (6-2, 6-1) in a battle of district unbeatens Saturday night at Sam’s Stadium in Brownsville.

The Patriots exploded for 34 first half points against District 16-5A DI’s top ranked defensive unit as quarterback Landry Gilpin and running back Danny Cantu got the action going right away. 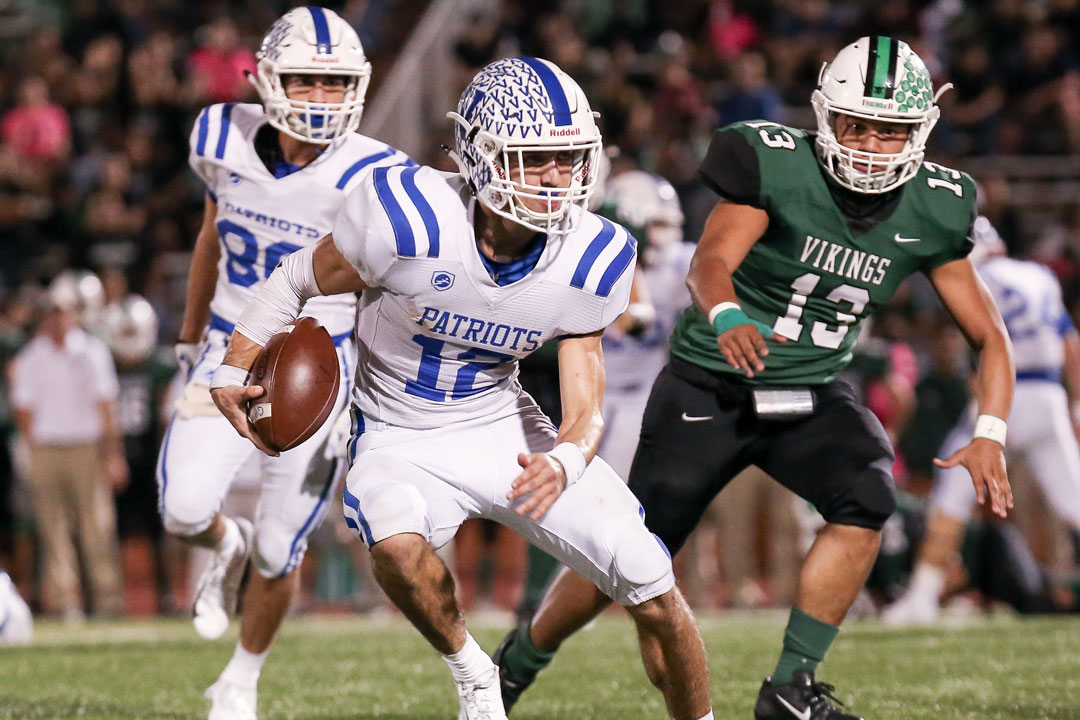 On the game’s second play from scrimmage, Cantu broke a 60-yard run down to the Pace 10 which led to a 5-yard touchdown run by Landry Gilpin. Their next time up, it was Cantu’s turn as he turned an 11-yard run into six points for a 13-0 early Patriot lead.

“We were hearing it all week knowing that this was going to be one of our toughest matchups of the year because they were 6-0, we were 6-0,” Landry Gilpin said. “Not only were they undefeated, they were confident about it and they knew they had a chance against us, so we were fired up about it on our side too.”

With a 34-21 lead at the half, the Mission Veterans defense turned things up in the third quarter and made two big plays that gave the Patriots space to put the game away.

Linebacker Jesse Gonzalez sacked Pace’s Jose Banda, leading to a turnover on downs to end Pace’s opening drive of the second half. On the Vikings next possession, linebacker Jazz Vallejo intercepted Banda to stop Pace’s scoring threat, sending the game into the final quarter with VMHS up 48-21.

Pace battled til the end by scoring two fourth quarter touchdowns, but it wasn’t enough as the Patriots were able to hold on for the 48-35 victory, their seventh straight 40-plus point performance.

“That’s a good football team,” said Mission Veterans Head Coach David Gilpin. “Ain’t nothing come easy and this one didn’t come easy. We made it look easy offensively, but defensively and special teams we struggled. I knew it was going to be a challenge, I knew it wasn’t going to be easy and our kids battled and we got out of here with one. 7-0 feels good.”

Landry Gilpin finished the game with 491 total yards, four passing touchdowns and two rushing touchdowns, his 23rd and 21st scores of the season. Cantu finished with 111 yards on the ground, one rushing and one receiving score, while receivers A.J. Gonzaque, John Aguilar and Leo Cantu each hauled in a touchdown catch.

Mission Veterans has clinched a playoff spot with two games remaining, but the Patriots focus remains on finishing with a perfect district record and claiming the 16-5A DI championship.