Nothing prepared Ashley Vasquez for how popular the raspa stand she co-owns with her husband would get.

Not the thousands of followers her raspa stand, Iced Cube, received on social media, or even the hour-long lines that formed outside the stand in its location in Elsa. 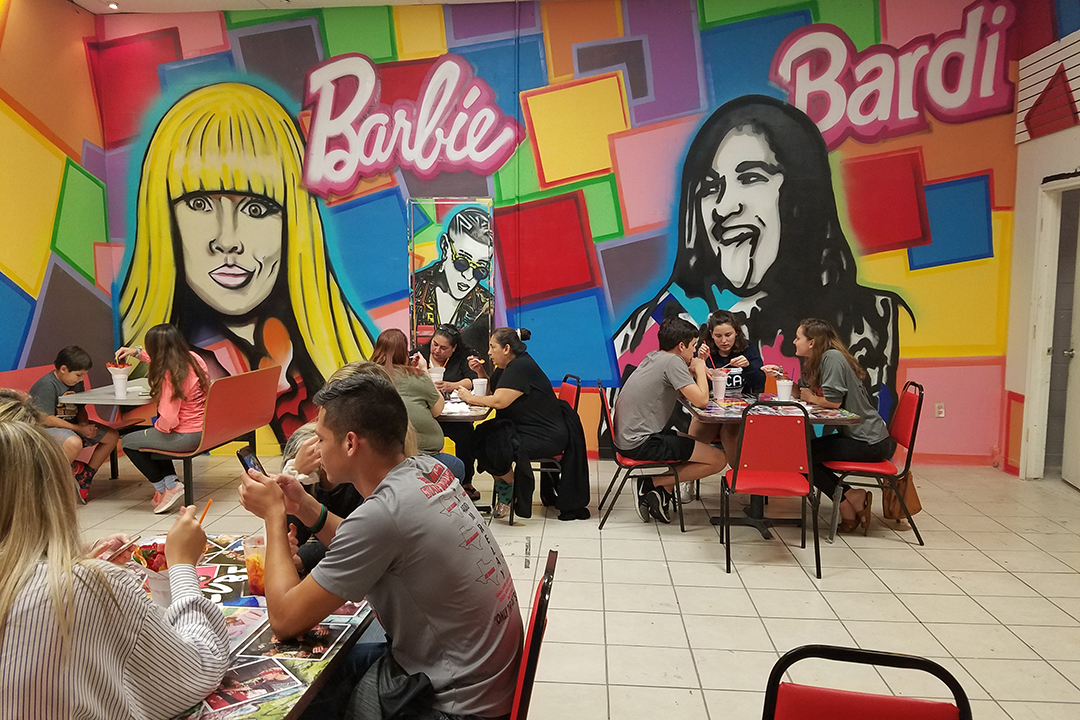 “It’s been intense, amazing, emotional, and crazy,” Vasquez said of her first year in business. “We went viral overnight after one of our employees tweeted a photo of one our raspas and people just flocked here. We went from having four cars in our drive-thru to having 60, we weren’t prepared for it, but we had to push through it.”

Vasquez and her husband, Jonathan Segura, co-own the raspa stand Iced Cube located in Elsa. Iced Cube, according to Vasquez, aims to serve “non-traditional” snacks and other treats. Its menu, mostly created by Segura according to Vasquez, boasts raspas so big that they have to be supported by paper plates strategically placed in the raspa cup. Toppings include Hot Cheetos, fruit and even ice cream sandwiches with prices starting at $4 and specialty items costing up to $12.

When it opened last year, Iced Cube was in a small shack before it moved to a converted house decorated in mural paintings by local artist Hector Guerra of celebrities ranging from Drake, Kim Kardashian and Selena.

Now, Iced Cube is bringing those unique treats to the city of Mission. On Saturday, Oct. 20, Iced Cube held a soft opening for their second location at 2711 E. Griffin Parkway. This location is a dine-in spot whereas their original spot is a drive-thru only.

“We were getting people from everywhere visiting our first location, but our biggest clientele were people from the Mission and McAllen area who were doing the 40-minute travel to sample our food,” Vasquez said of the new location. “We felt we owed it to them to be closer.”

For Vasquez, it was important to give back to her customers who made her business into a success in the first place.

“When we first started we had nothing, we were actually homeless,” Vasquez said, recalling that she and her family would travel with a mattress to sleep on at a different friend’s or relative’s house every night.

That changed last year after they opened the first Iced Cube location.

“We wanted to do a twist on raspas since they’re usually geared toward kids so Jonathan and I wanted to do a spin on it and gear it toward millennials and teens,” Vasquez said. “We put pop culture into our snacks and named our snacks after celebrities.”

The work paid off, Vasquez said. Iced Cube has been featured in outlets such as the “Texas Observer” and has even received offers to start a franchise in Los Angeles and Austin.

Besides the second location, Vasquez and Segura have used the success of their business to donate to several local sports leagues and even gave out $2,500 in scholarships to local high school students last summer.

“We know the struggles of having nothing so now that we became something so big and people are so supportive, we had to thank them,” Vasquez said. “These people are responsible for putting food in our kid’s mouths. We just bought a house this year, we’d literally be nothing without our customers.”

Thanks to its ardent fanbase, Vasquez said she felt comfortable in opening a second location in the middle of fall, a time when most people aren’t clamoring for a raspa.

“We just really like this location and it felt right to be here,” Vasquez said. It’s scary when you come from nothing and are about to spend a big amount of money to open a raspa stand in a season that’s not suited for your business in your prime season. It has to feel right.”

“People loved taking photos of our products when we first opened,” Vasquez recalled. “The fact that people thought it tasted as good as it looked got them to come back. So now we’re always creating and innovating our menu to one up ourselves as often as we can.”

With their new location, Vasquez hopes that Mission residents who have yet to experience Iced Cube get the same sense of creativity she and her husband feel whenever they create a raspa.

“I want them to experience art and be surrounded by it,” Vasquez said. “We have a build-your-own-raspa option so that customers get a chance to experience something they’ve never seen before and create art.”

Vazquez said she and her husband will travel back and forth between Iced Cube’s two locations and hope to commemorate its opening with a red-ribbon cutting in the near future.