Working toward improvements in civil service, Mission is planning on putting a significant amount of money toward the fire department and Birdwell Park.

The city was recently awarded over $1.5 million, $1.02 million from the SAFER program within the Department of Homeland Security and $500,000 from the National Park Service’s Land and Water Conservation Fund. 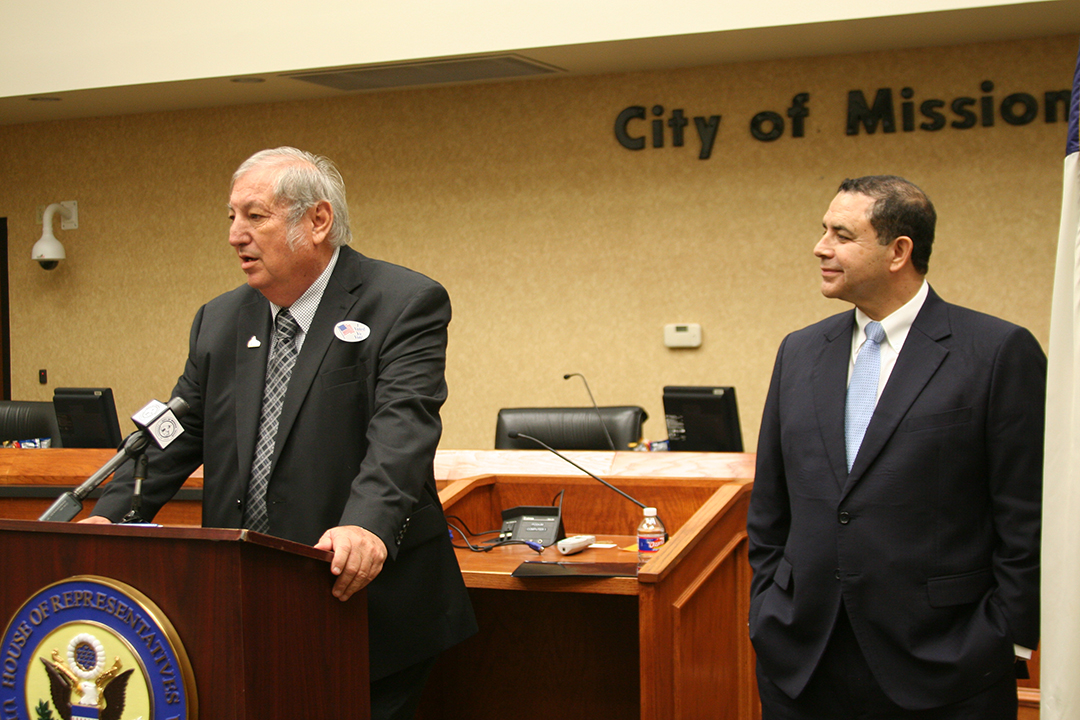 Congressman Henry Cuellar presented Mission with the two checks this Monday, and was joined by State Senator Juan “Chuy&rdquo; Hinojosa and Ana Garcia, who was representing U.S. Senator John Cornyn.

Cuellar mentioned that they all worked together in a bipartisan effort in order to help secure these funds for Mission.

“We always put it together in a bipartisan way,&rdquo; Cuellar said. “We just want to say congratulations for the new men and women firefighters that I hope you all will hire.&rdquo;

Garcia said she was glad to be there on a “great day for Mission.&rdquo; While Cornyn could not attend the presentation, Garcia read a statement written by him.

“This grant helps provide the resources you need to protect the residents of Mission, Texas,&rdquo; Cornyn&rsquo;s letter read. “The sacrifices you make and the bravery you exhibit to safeguard our community serves as a positive example for the state of Texas, and I encourage you to continue pursuing excellence in the years to come.&rdquo;

Mission Mayor Armando O&rsquo;ca&ntilde;a and City Manager Martin Garza spoke on the significance of the event and what the money will mean for the city.

“Obviously it&rsquo;s a great day in the City of Mission,&rdquo; O&rsquo;ca&ntilde;a said. “The future of Mission is beginning, and progress has been in Mission for many many years, but it&rsquo;s not stopping, it&rsquo;s going to continue.&rdquo;

They thanked the grant writers from the College Rutledge Associates for their work on the two projects.

The DHS SAFER Grant for Mission is $1,022,828, which will be used to hire nine additional firefighters for the city department. Over a period of three years, the funds will be distributed at $340,942 annually.

The firefighters will complete staffing for every shift at each station in Mission, which should improve response time in emergencies and meet the National Fire Protection Association 1710 standard, which recommends at least four firefighters staffed at all times per station.

“A few minutes or a few second can be life or death,&rdquo; Cuellar said. “This is why reaching that 1710 standard is so important. It&rsquo;s not only the response time, it&rsquo;s about growth. As Mission is growing very fast, you&rsquo;ve got to have that level [of firefighters] there.&rdquo;

Mission announced plans to build a new fire station that will be helping the southwest part of the city. Fire Chief Gilbert Sanchez spoke about the department&rsquo;s excitement about the grant funds, which will be used only for the hiring of the nine firefighters.

“The department total will be 77 firefighters with the addition of the nine firefighters,&rdquo; Sanchez said. “It was great news on September 7th when I got notice that we received this grant for the city. It&rsquo;s a great start.&rdquo;

The NPS Land and Water Conservation Fund Grant is $500,000, and it will be used as part of the budget for the first tennis complex in Mission, located at Birdwell Park. The project will renovate the current courts there and also include the building of 13 more courts and facilities.

The Valley Baptist Legacy Foundation is matching the grant funds, giving Mission an additional $500,000 for the tennis center. The construction will also include a revitalized trail at the park.

“There&rsquo;s been a lot of talk and a lot of meetings about this grant,&rdquo; Garza noted, saying he has been speaking with Hinojosa for a couple years on the matter. “The importance of thias tennis center is not only for the citizens of Mission, but for visitors that come and participate in this type of sport.&rdquo;

“It&rsquo;s just going to be a great wellness center for our city and for the Rio Grande Valley,&rdquo; Garza added.
Hinojosa said parks are important for the community and for families.

With the renovations, this complex will be able to house major tennis tournaments. When surveying residents, tennis was ranked number three in the Parks and Recreation Master Plan.

Brad Bentson, the Mission Director of Parks and Recreation, said he was excited to see the tennis complex be built and used by residents.

“This is a really exciting time for the City of Mission,&rdquo; Bentson said. “We&rsquo;re all about trying to bring in a healthy lifestyle and quality of life for the citizens of Mission. It&rsquo;s really encouraging to have the support not only locally, but on the state level and national level as well.&rdquo;a