Halloween is a fun filled day with candy, costumes, and if you talk to Winter Texans at Casa del Sol, Ranchero Village and Mission Bell Resort, community.

Over the years, the three Winter Texan parks have established a Halloween tradition of opening their gates to the community every October 31st, welcoming trick-or-treaters to celebrate the day in a fun, safe environment which helps build a relationship between the people of the Rio Grande Valley and Winter Texans. 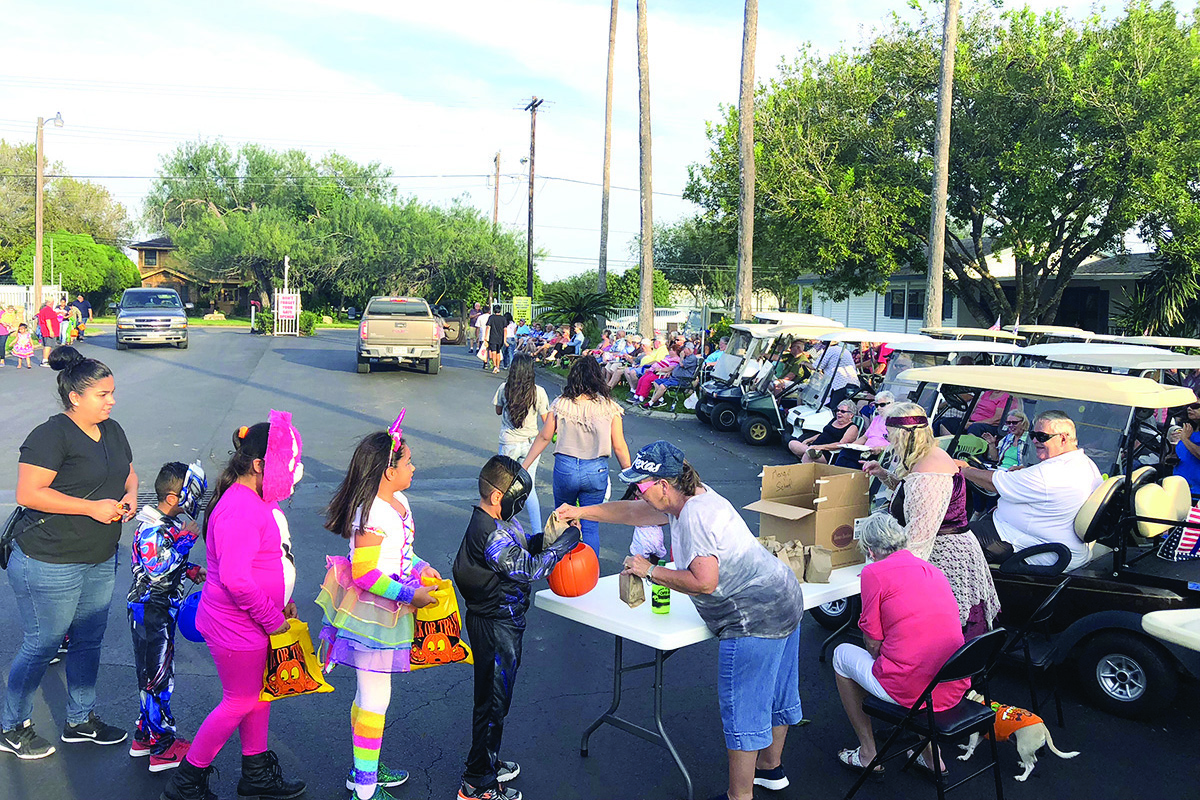 “When you live in a community, you should be a part of the community,” said Merla Freng, an 89-year old retired teacher from Minnesota and Casa del Sol’s oldest resident.

As cars full of trick-or-treaters drove down the long entrance of Casa del Sol Mobile Home and RV Resort, their eyes would light up when they discovered they weren’t the only ones dressed up. Park Managers Joe and Kathy Barger Compton were dressed as a taco, salsa verde, and their lumberjack dog Chimi, amongst a few other costumes, waiting to give candy to trick-or-treaters of all ages.

“It’s such a big day for the kids, and us old-timers, we love to see little kids, so this is a big deal for us,” Freng said. “We get to see all the little kids, and I was a kindergarten teacher and I loved to see them in all their costumes; it reminds me of the old days.”

Casa del Sol’s annual Halloween Parade features a Halloween themed decorated golf carts, a costume contest, a viewing of a scary movie (War of the Worlds), and of course the giving away candy to trick-or-treaters dressed in costumes.

“I just love seeing the little kids in all their costumes,” said Jan Sieckert, who was dressed as a hockey player and has lived at Casa del Sol for 14 years. “I’ve always loved Halloween, it’s fun dressing up; we get to be kids again. We had a parade with our golf carts, we’ll watch a movie later; it’s a fun time for everyone.”

In Weslaco, foldable chairs lined the entrance of Ranchero Village Mobile Home Park occupied by friendly faces of Winter Texans who were happy to celebrate the day while handing out candy to the community at their Annual Halloween BBQ.

The senior resort and mobile home park has opened its doors to trick-or-treaters for more than 20 years, and right at 5:30 p.m. on Halloween, cars began lining up and parents got down with their kids to grab a goodie bag full of candy. Ranchero Village came together to make 300 goodie bags to hand out over the course of the evening.

Two trick-or-treaters dressed as Spiderman and Superman happened to show up before the 5:30 start time, but of course they were welcomed with open arms and the first to get their hands on the Ranchero Village goodie bags.

“It’s all about the kids,” said Norm Mayer, a Wisconsin native and president of activities at Ranchero Village. “Even if there were 300 here early we would have given them all candy.”

At the Mission Bell – Tradewinds Fall Festival in Mission, they tried adding a little flavor to this year’s Halloween festivities. While passing out candy to trick-or-treaters has long been a tradition, the Fall Festival was moved inside this year where kids could play games such as ring toss, Go Fish and hopscotch for the chance to win even more candy.

“This was our first year doing the games, we hope to add to it every year,” said Cynthia Schweitzer, one of the managers of Mission Bell. “Our ballroom holds 900 people so hopefully we can grow big enough to fill it because our Fall Festival is a safe place for kids and parents in the community who need places like that, so we’re just hoping to be able to provide that.”