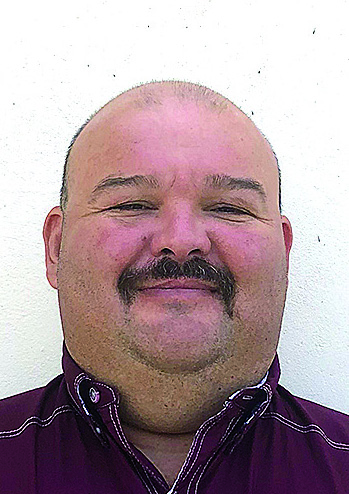 “He’s willing to come to us, recruit and work hard for the city of La Joya,” said Mayor Jose A. “Fito” Salinas.

Frankie Salinas will start over from scratch, recruiting new volunteers and rebuilding the department.

“I’m excited,” Frankie Salinas said, adding that he wants to bring new ideas to La Joya, including public education about fire prevention and hands-on training for volunteers. “There’s going to be a lot of training.”

“But prior to that I was a fire boy scout for the city of Edinburg,” Frankie Salinas said. “So I was actually in the ninth grade when I got involved with the fire service.”

The volunteer job, though, didn’t pay.

Frankie Salinas supported himself by working for Hidalgo County, taking jobs with the Motor Vehicle Department, the Precinct 4 Constable’s Office and the District Clerk’s Office.

Edinburg eventually offered him a full-time job in May 2011. He spent five years inspecting commercial buildings and investigating fires before taking a driver position.

When he heard La Joya needed a fire chief, Frankie Salinas drove to City Hall and asked for an application.

“I had the opportunity to talk to the leadership. And I kind of liked what I saw,” Frankie Salinas said, adding that the City Commission wants La Joya to provide the best possible fire protection. “And they want somebody qualified.”

How much La Joya will pay Frankie Salinas for the part-time position remains subject to negotiation. Leroy Salinas received a $1,200 monthly stipend.

“I just want to go on record that he is not related by blood to the mayor,” Fito Salinas said, adding with a chuckle: “And I hope one of these days he might be, I don’t know.”

Both Fito Salinas and his wife, Mary Salinas, serve on the City Commission with Maria E. “Geny” Salinas.

“It’s amazing, mayor, how we got so many Salinas applying here for the city of La Joya,” said City Administrator Mike Alaniz.