After being deployed to Afghanistan four different times with the U.S. Marine Corps, Sergeant Fieldy is enjoying retirement with his second handler, Corporal Nick Caceres, and his family.

Sgt. Fieldy was recently named the 2018 Military Hero Dog of the Year by the American Humane Association, and he and Caceres were flown to New York City for the awards ceremony and an appearance on the Today Show. 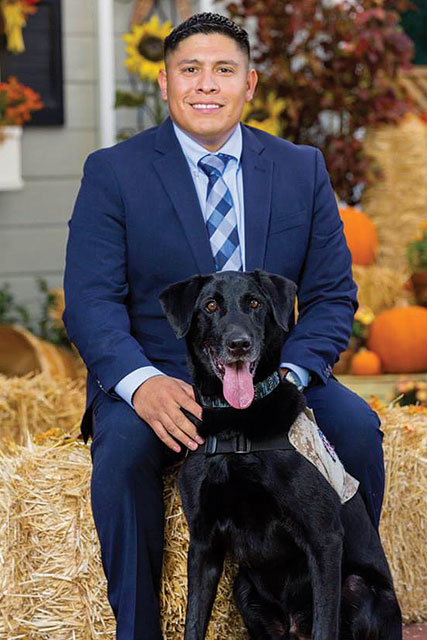 In 2010, Sgt. Fieldy, who had already been deployed once, met Caceres in South Carolina while in training with a group of specialized units created to combat IEDs (improvised explosive devices) in Afghanistan.

Originally planning on choosing a different dog to work with, Caceres said that during a demonstration given by the K-9s there, Sgt. Fieldy stood out as the clear choice. While stationed, their job was to look for IEDs.

“We were there to be in front of the patrol,&rdquo; Caceres said. “And Fieldy led the way.&rdquo;

If they were patrolling in vehicles and spotted anything questionable, Caceres would send Fieldy to double check and see what it was. Sgt. Fieldy would sniff out and source any potential explosive devices and signal to Caceres.

“When he got the scent [of IEDs and explosives] that we worked with, he would pinpoint it,&rdquo; Caceres said. “When he found where it was coming from, he would lay down on top of it, looking at me, and that would let me know that&rsquo;s where it&rsquo;s at.&rdquo;

Sgt. Fieldy wouldn&rsquo;t get off the spot until Caceres called him back, gave him his toy and put him back on the truck. They both experienced the effects of an IED when, during a patrol, one of their vehicles struck a pressure plate and injured some of the occupants of an M-ATV (Mine Resistant Ambush Protected Vehicle).

Fieldy had to clear a landing zone so a helicopter could land safely and take the injured Marine out of the area without having to worry about landing on top of another bomb.

Both Caceres and Fieldy “worked tirelessly&rdquo; to detect more explosives, and eventually found a 60-pound barrel filled with explosives. During Caceres&rsquo; tour, they both discovered several IEDs and components that “helped save countless lives.&rdquo;

When Caceres&rsquo; tour ended, Sgt. Fieldy still had two more deployments to go. Caceres was informed that once Fieldy was able to retire, he could petition to adopt him. Caceres checked in on Fieldy&rsquo;s status every three months.

“It wasn&rsquo;t likely that I was going to get him, because they go by the handlers [in order],&rdquo; Caceres said. “I was number two, so if the number one guy put in his paperwork, they would have called him first.&rdquo;

Sgt. Fieldy was honorably discharged and retired in Aug. 2014, and Caceres got the call that he was able to adopt Fieldy soon after that through the American Humane Association. His wife, Marla, was pregnant with their first child when Fieldy came to McAllen to join their family.

“I think the number four guy had also put in his paperwork,&rdquo; Caceres said. “They said ‘if you can&rsquo;t, we&rsquo;ve got another guy next in line,&rsquo; and I said ‘well, he&rsquo;s coming to Texas.&rsquo;&rdquo;

In Nov. 2014 Sgt. Fieldy participated in the Veterans Day Parade in NYC (and since then, he is the only dog from that particular group that is still alive). In 2016 he received the Lois Pope Life K-9 Medal of Courage Award on Capitol Hill and has been named this year&rsquo;s Military Dog of the Year.

Fieldy, now 11 years old, has the energy of a three-year-old. He has been enjoying retirement, although there was a short adjustment period.

“For the most part, he&rsquo;s adapted pretty well,&rdquo; Caceres said. “He was used to going with me everywhere, so at first he had a little bit of separation anxiety because I wasn&rsquo;t taking him with me, that was a harder part for him.&rdquo;

Caceres said that now, Sgt. Fieldy doesn&rsquo;t have to do anything, and there&rsquo;s no job, which is another change he has had to go through.

“Now he knows that we&rsquo;ll come back at the end of the day,&rdquo; Caceres said.

For Caceres, the biggest benefit he has had from adopting Sgt. Fieldy is knowing that they are giving him the best retirement possible.

“It&rsquo;s good knowing that he&rsquo;s living a relaxed life, he&rsquo;s in good health and anything he needs that I can provide for him, I&rsquo;ll do whatever I can,&rdquo; Caceres said. “Because he did so much for all of us as a unit out there.&rdquo;

Caceres noted that while his kids are young and don&rsquo;t understand the impact Fieldy has had, they eventually will. According to him, Fieldy has played an important role in all of their lives.

It&rsquo;s important people know about military dogs like Fieldy, Caceres said, so people realize that those serving our country are not out there alone.

“Dogs have been used in every war that we&rsquo;ve ever fought,&rdquo; Caceres said. “They don&rsquo;t get as much recognition for what they&rsquo;ve done. They do a lot, they&rsquo;re out there in harm’s way so we don&rsquo;t have to be.&rdquo;

Caceres and Fieldy hope to make waves in order to start a veterans memorial in McAllen for K-9s who have served.
“If we can bring more light to military dogs and what they do, people will have a better understanding as far as how useful they are,&rdquo; Caceres said. “And they&rsquo;ll have more of an appreciation.&rdquo;

In the application for the Military Dog of the Year Award, Caceres describes Sgt. Fieldy as his hero – a title he still maintains to this day.

“He never quit on me,&rdquo; Caceres said. “It was 130 degrees [Fahrenheit], and if I asked him to go out there and look for 30 minutes, he never quit.&rdquo;

“He was tired, he was running around with a fur coat,&rdquo; Caceres added. “It got so hot I had to put boots on him. Everything I asked of him, he did that and more. If that&rsquo;s not a hero, I don&rsquo;t know what is.&rdquo;

Sgt. Fieldy has his own Facebook page, Twitter&nbsp;and Instagram. The video from the 2018 Dog of the Year Awards featuring Sgt. Fieldy can be found&nbsp;here.