Mission residents got to experience walking while “blind” for the first time outside the Parks and Recreation Center and Mission CEED building last Saturday.

The National Federation of the Blind (NFB) held their 8th annual White Cane Walk and Resources Fiesta for the blind and visually impaired for the first time in Mission last weekend. The event drew crowds from all over the Rio Grande Valley, and included the participation of about 20 vendors. 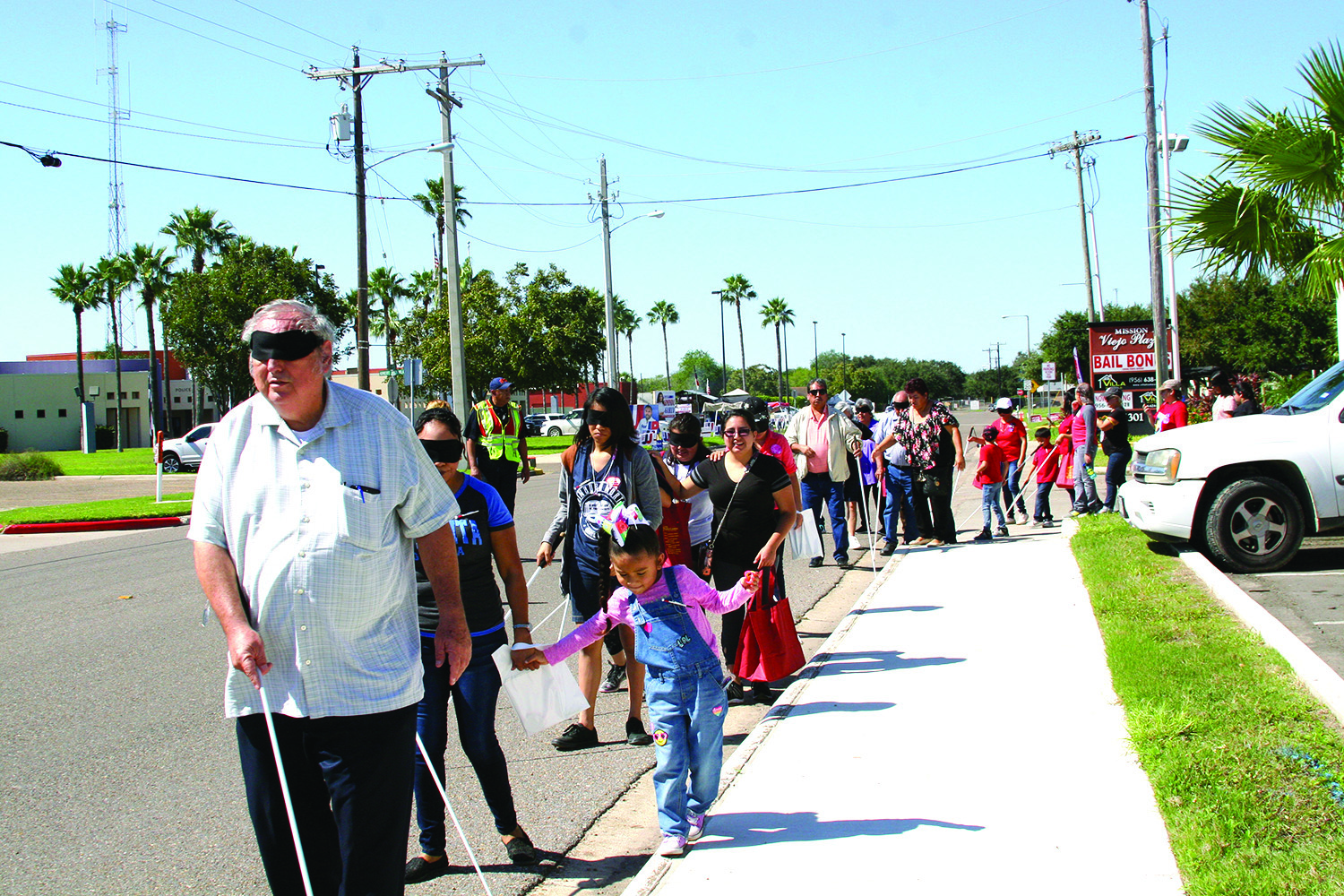 Macarena Peña, the president of the RGV Chapter of the NFB, was excited to hold the gathering in Mission and observe how it would open up new possibilities for the visually impaired in the city.

Peña has noticed that since opening the RGV chapter in 2010, the education and awareness this particular fiesta has motivated has been essential and important.

“We want to educate,” Peña said. “In this event, you’re going to see a lot of blind people doing the demonstrations, talking about the services and the programs.”

She mentioned that the day before the event, Peña got a phone call from a mother with a six-year-old who is blind.

Peña told that mother that she came to the right place, noting that the NFB is a major local resource that people have access to.

“If we only touch that one person, this program and this event has made a difference,” Peña said. “He can learn about the resources available, and that’s one of the reasons why we have this event – a lot of people don’t know what’s available.”

The event included a White Cane Walk, where participants donned blindfolds and used white canes to aid them in order to attempt walking for a few minutes in a blind person’s shoes, and a demonstration tennis match between two children who are visually impaired.

Over 250 people attended the fiesta. Mission Mayor Armando O’caña, who participated in the White Cane Walk himself, was not expecting the turnout the event had.

“I was very impressed with the number of people that have responded,” O’caña said. “There’s a big impact here.”
O’caña spoke about his grandmother, who was blind for 50 years, and said that she never used or had access to a white cane. The event is important, he said, so people can be aware of the options available.

“Obviously this has to do with educational awareness,” O’caña said. “For those who are blind to have access to the services that are here and for those who are not blind, people are coming in and educating themselves. Hopefully, this is very productive.”

One of the stations inside the Parks and Recreation Center was run by Karla Gabriela De La Fuente, a local artist and certified art teacher who has been working with Peña and the NFB since the summer. De La Fuente has been helping Peña create her own art by illustrating what Peña visualizes in her mind by putting wire and hot glue on a canvas.

“She would think of an image in her mind, and I would create the outline,” De La Fuente said. “It’s kind of like braille, but with painting.”

De La Fuente had several pre-made canvases depicting a still life of oranges and a butterfly at the event that anyone could paint on.

Information about RGV Chapter meetings for the NFB, President Macarena Peña can be contacted via email at mpena@nfbtx.org or macarenapena@rocketmail.com.