Businesswoman Mary T. Hernandez, who campaigned against compadrismo and corruption at the La Joya Independent School District, won a seat on the school board Tuesday. 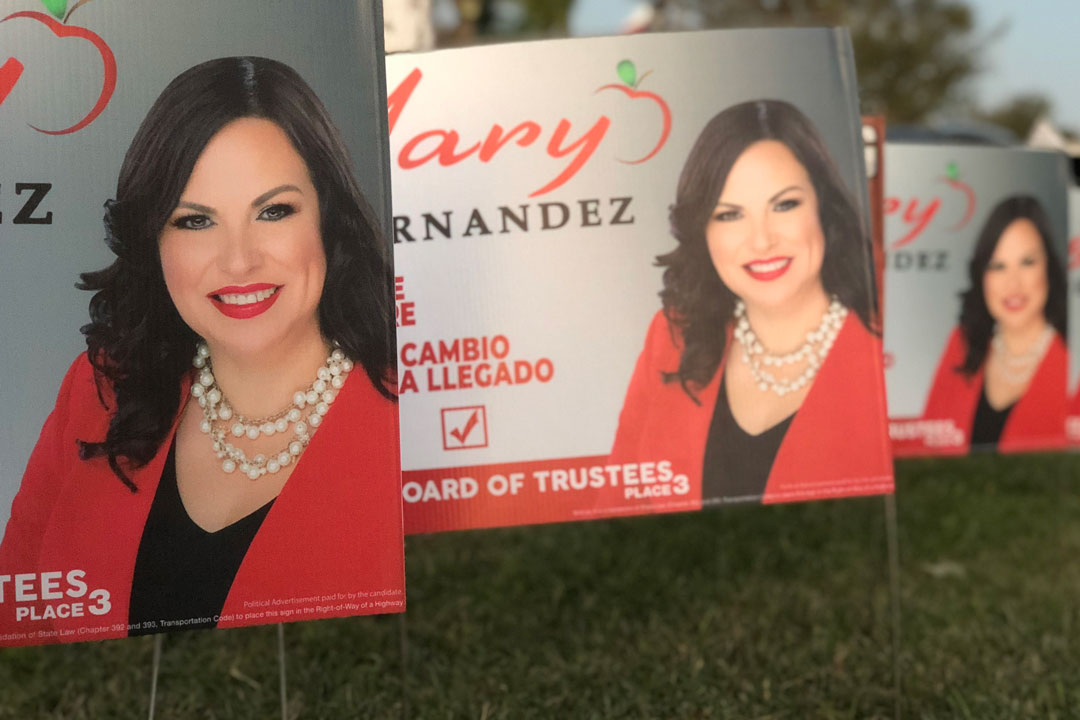 “I’m very emotional,” Hernandez said. “I don’t even know what to tell you — I just thank God and everybody for sticking with me all this time.”

Alaniz had support from voters in Sullivan City, but Hernandez won Peñitas, Palmview and the entire east side of the school district, according to precinct-level data published by the Elections Department. They roughly split La Joya.

They kept the “1” and adopted the moniker “United,” telegraphing the fact they’d come together.

After a meeting on Aug. 1, the power brokers coalesced behind three candidates:

Place 3: La Joya Area Federal Credit Union CEO Johnn Alaniz, 42, of Palmview, an incumbent who joined the school board in May 2006.

Place 2: Pamela Flores, 49, of Palmview, a teacher who ran a low-profile campaign.

Place 3: Businesswoman Mary T. Hernandez, 52, of Mission, who owns a trucking company with her husband.

Ochoa trounced them. And without any opposition, Nereyda Cantu cruised to victory.

Alaniz, though, faced Hernandez, who ran with support from members of the Palmview City Council and the Salinas family in La Joya.

“The people spoke. And they were heard,” said Palmview City Councilman Joel Garcia, who served two terms on the school board.

Progress for Palmview, the local political party, supported Hernandez from the beginning, Garcia said, adding that he’s deeply concerned about the current school board.

Hernandez spent more than $35,000 from July 30 to Oct 29, according to campaign finance reports filed with the school district. Hernandez accepted few donations and footed most of the bill herself.

“I didn’t see anything different from other campaigns, to be honest with you,” Alaniz said. “I don’t think I would spend that amount of money out of my own pocket for a position that doesn’t pay.”

Fueled by donations from attorneys and businesses with school district contracts, Team Un1ted spent more than $71,000.

Throughout the campaign, Hernandez warned about cozy relationships between the school board and politically connected contractors.

“I wanted for people to actually see what’s going on in our school district,” Hernandez said. “And for them to come out and vote. That was my main thing.”

The Team Un1ted candidates touted their experience and qualifications.

“I don’t know what my opponent’s platform was except for ‘change,’” Alaniz said. “I don’t think she ever expressed what she wanted to do or anything. I ran based on what we’ve been able to accomplish there at the district.”