With more than 100 different species of butterflies recorded at the National Butterfly Center last Saturday, the Center welcomed hundreds of guests to their annual Community Day.

The free event, which kicks off the center’s three-day long Butterfly Festival, saw visitors from across the country visiting the center and enjoying the different species of plants and wildlife in the area. 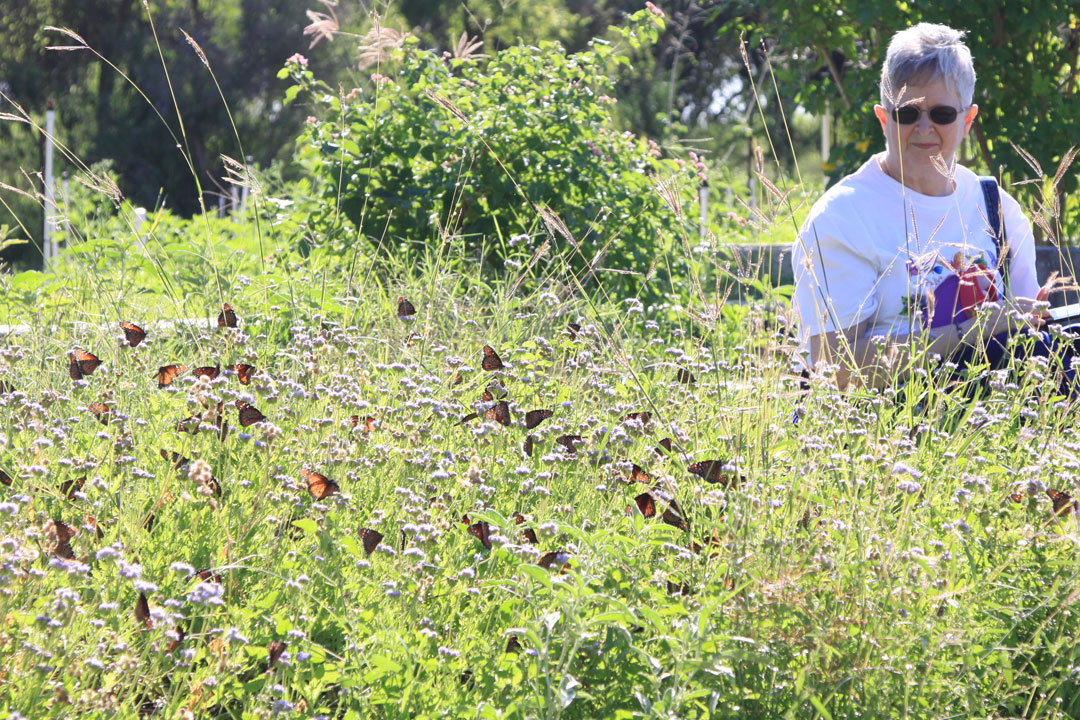 For Linda Cooper, who came from Florida to visit the center, the festival is a tradition she has attended since 2002. She, her family and her friends stay in the Valley for six weeks every year in the fall, she said.

“I come because I love butterflies and the camaraderie provided here,” Cooper said while she and a group of her friends were tracking a Definite Patch-a species of butterfly that she said she’s never seen recorded at the center before. “A lot of people come here and it’s a lot of the same people you see here at these events so it’s nice being reunited with them every year for this occasion.”

The Center’s Community Day-which invited the public to enjoy all the amenities the center offers free of charge-came days after the U.S. Customs and Border Protection and the U.S. Army Corps of Engineers announced they have awarded a $145 million contract for border wall construction to begin in February, according to a news release sent out last week.

The release, dated Friday, Nov. 2, stated that the contract went to the Galveston-based SLSCO Ltd. and was funded through CBP’s 2018 fiscal year appropriation.

The project, dubbed RGV-03, calls for a “reinforced concrete levee wall to the height of the existing levee, 18 feet tall steel bollards installed on top of the concrete wall, and vegetation removal along a 150-foot enforcement zone throughout the approximately 6 miles of levee wall system” within the McAllen station area.

Residents have long criticized construction plans of the border wall which either go through or leave local places such as the La Lomita Chapel, the National Butterfly Center and Bentsen-Rio Grande Valley State Park south of the border wall.

“We’d lose the habitat if that happens,” Cooper said of the impending wall construction. “I hope the center is still operational after the wall is built, but the habitat loss along the river from construction will impact it and I can’t see myself coming back here. It’d impact my plans to visit the area next year for sure.”

Mariana Trevino-Wright, director for the National Butterfly Center, is one of the many residents who have publicly criticized border wall construction. However, she praised attendees of the Community Day, which she said is a sign of support from the public.

“Judging by the volumes of cars in the parking lot and the people here, it’s a success,” Wright said. “It is tremendous to see all this support and have the people who live here understand this is a safe, welcoming, family-friendly place to be.”

Wright also expressed concerns about how different the Community Festival would be like next year. Among the most popular attractions at the center is a riverboat tour on the Rio Grande River, something she said this could be the last year they promote such a tour.

“Community day brings in so many first-time visitors to the center so it’s definitely a celebration,” Wright said. “They’re excited to know we’re here to experience the magic of this place, especially during the peak of butterfly season. I think the mood will change as our new and returning visitors visit the area and see what a treasure it is. In light of these experiences, we may have a border wall or greater military presence in our area. Who knows? It could be very different next year.”