Even though he has been gone for a decade, U.S. Army Specialist Alex Daniel Gonzalez has not been forgotten by the city.

On Friday, Nov. 9, the city of Mission held a street dedication ceremony for Gonzalez where they renamed the street he grew up on after him. 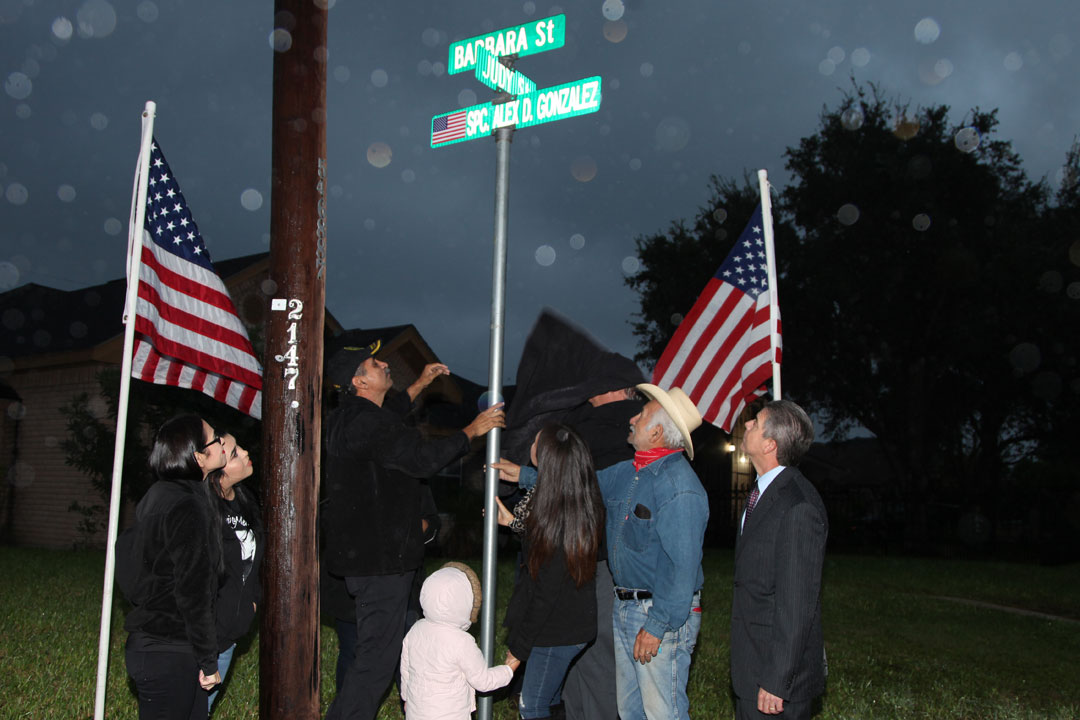 “He used to play here, on this street. You can get a good view of the street from the house,” Gonzalez’s father, Alfredo, said at the ceremony. “Alex is watching us from above, watching this unfold…this is now sacred ground for the family.”

In honor of Gonzalez, his family and officials with the city of Mission gathered outside Gonzalez’s childhood home-located on the 2200 block of Barbara Street-to witness the unveiling of the new street sign. The sign reads “SPC. Alex D. Gonzalez” and can be seen from his family’s house, serving as a reminder of how the city has honored Gonzalez.

Gonzalez was 21 when he was killed in Mosul, Iraq, on May 2008 from wounds suffered when his vehicle encountered small arms fire and a rocket-propelled grenade attack.

Gonzalez was a 2005 Mission High School graduate and played football and baseball for the school. Determined to join in his father’s footsteps, he joined the U.S.

Army right after graduating from high school and planned to be a police officer after completing his four years of service in the army.

“He told me he wanted to be just like me, or even better,” his father said. “He just wanted to wear the uniform, join the Army, ever since he was small. That’s what he was.”

Gonzalez was assigned to Fort Hood in the 43rd Combat Engineer Company, 3rd Armored Cavalry Regiment. He frequently volunteered for dangerous missions, saying that if he did not, one of his fellows would have to.

He was laid to rest in the Rio Grande Valley State Veterans Cemetery in Mission. Shortly after his death, Gonzalez became an honorary police officer, his family said.

“Today is a great moment in Mission,” city Mayor Armando O’caña said at the ceremony. “We are honoring an individual that did the extreme sacrifice for us to stand here…we want to honor him as a city.”

O’caña added that he knew Gonzalez through his church as he was an altar boy at Mission’s Our Lady of Guadalupe Church.

“When you see someone start off as a young altar boy and then grow up to go serve our country, it leaves an impact,” O’caña said. “We saw him as a community go to serve and not come back alive, and yet he’s alive in our hearts.”

The street dedication ceremony was the second event held by the city in honor of Gonzalez. In April, the city held a rededication ceremony for the improvements made at the Alex Gonzalez Park which is located at the corner of West Business Hwy. 83 and Moorefield Rd.

“It’s a great memory for the sacrifice that Alex made for his country,” Mission City Manager Martin Garza said at the event. “He’s never going to be forgotten. He and other veterans played a great sacrifice for the freedom we have in our daily lives and are now a part of the city.”

Gonzalez’s younger sister Audrey spoke of her brother at the street dedication ceremony. She reflected on how even a decade after his death, Gonzalez continues to inspire family members.

“My son looks up to police officers and firefighters, and he wants to head out on that route like Alex,” Audrey said. “We have a guardian angel watching us, making sure our young ones our growing up to be heroes. My brother was something else, you’d have loved to know him.”