The road to the postseason is in the rearview mirror and teams still standing are locked-in on what lies ahead: the Texas High School Football Playoffs.

Teams across the state are set to embark on their postseason journeys and the Mission Veterans Memorial Patriots, Palmview Lobos and Mission Eagles are playoff ready. 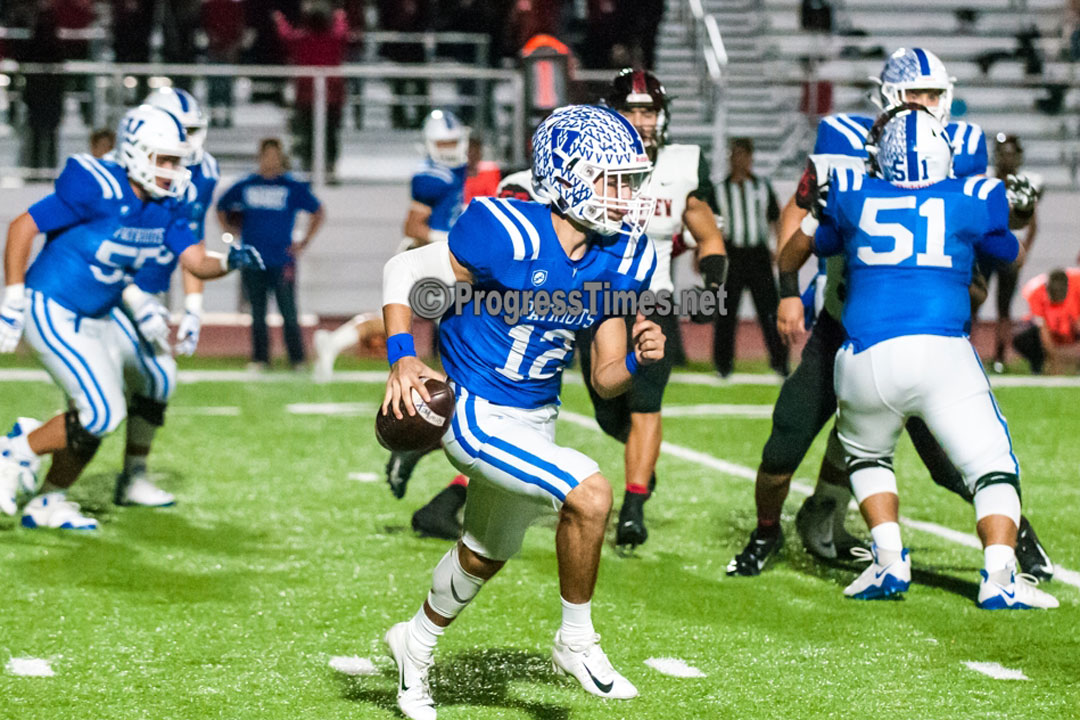 Mission Veterans Memorial Patriots
The 2018 Patriots put their name in the record books by becoming the first team in school history to win a district championship outright. After a perfect 9-0 district season, the Patriots reign supreme in 16-5A-Division I and aren’t planning on stopping any time soon.

“We wanted the district championship, while we’re happy about it, that was not our ultimate goal,” said Head Coach David Gilpin “This year’s team, I want to see make a playoff run and we have a tough opponent in the first round.”

Mission Veterans finished the regular season as the Valley’s No. 3 ranked team as they took over their new 10-team district. Now, the Patriots focus on making that playoff run they’ve been after since day one.

The Patriots drew a first round matchup against the Victoria East Titans, the fourth place finisher in District 15-5A-DI with a 5-5 overall record and 5-3 in league play. The Titans have a tough task lying ahead as the Patriots bring the Valley’s top offense (565.6 yards per game) and their district’s second ranked defensive unit (268.2 yards allowed) into the postseason.

Leading the Patriots in his final year is senior quarterback Landry Gilpin, an All-State honoree just a season ago. Through 10 games this year (without playing multiple 4th quarters due to blowouts), Landry Gilpin threw for 3,063 yards and 32 passing touchdowns, ran for 1,404 and 26 rushing touchdowns, while only throwing seven interceptions. The dual-threat quarterback will be out to lead the Mission Veterans Patriots further than they’ve gone before.

The Mission Veterans Memorial Patriots playoff journey is set to begin Friday night as they host the Victoria East Titans at 7:30 p.m. at Tom Landry Hall of Fame Stadium in Mission.

Palmview Lobos
The Palmview Lobos proved doubters wrong in 2018 and punched their playoff ticket in a big way by winning their season-finale against Brownsville Veterans to finish 6-3 in District 16-5A-DI as the third seed.
After missing out on the postseason a year ago and failing to win a district game, the Lobos were determined from the jump to put Palmview back in the playoff picture and they did just that. The Lobos were led by running back Mario Chapa who posted 1,345 rushing yards and 16 touchdowns on the year, giving Palmview the third ranked offense in District 16-5A-DI with 340.7 yards per game.

Now, the Lobos ground attack will go on the road as Palmview is set for a first round playoff matchup against the Flour Bluff Hornets.

Flour Bluff (7-3, 5-3) brings a balanced offensive approach into their bi-district game against the Lobos, one that’s difficult to stop. The Hornets are the only team to hand Calallen a loss this year, and they opened the season by beating the PSJA Bears, the No. 6 team in the Valley, by a score of 33-28.

Palmview has played the role of the underdog well this year and embraced the challenge, and they’ll have to use that as motivation one more time to knock off Flour Bluff if they hope to move onto the area round of the playoffs.

The Palmview Lobos are set to take on the Flour Bluff Hornets at 7:30 p.m. at Hornet Stadium in Corpus Christi.

Mission Eagles
The Mission Eagles (8-2, 5-2) are back in the playoffs for the first time since 2012. Head Coach Koy Detmer took over the program in 2016 and has improved each year, finally snapping a six-year streak of missing the postseason.

After losing starting quarterback Damian Gomez to a broken collarbone in the middle of the season, freshman Jeremy Duran took over and has gone 3-1 under center for the Eagles and helped lead them to their first playoff berth in six years. Running back Horacio Moronta and fullback Andrew Maldonado helped carry the offensive load for the Eagles, while the defense finished the year as the third ranked unit in District 30-6A.

Now, the Eagles, ranked No. 5 in the RGV, are preparing for their first playoff game under Detmer as they’ll take on Laredo United on the road Friday night.

Laredo United (8-2) went a perfect 6-0 in district play on their way to the District 29-6A crown and put their seven game win streak on the line in a do-or-die situation against the Mission Eagles.

The Mission Eagles are set to travel to Laredo to take on Laredo United at 7:30 p.m. on Friday at the Laredo Student Activity Center.