The city and Mission Crime Stoppers gathered outside of the Parks and Recreation building last Friday morning, offering full Thanksgiving meals including turkey, bread, canned vegetables, potatoes and pasta to families in need.

The efforts were paid for by several community business sponsors, and cars lined up around the corner waiting to be served. 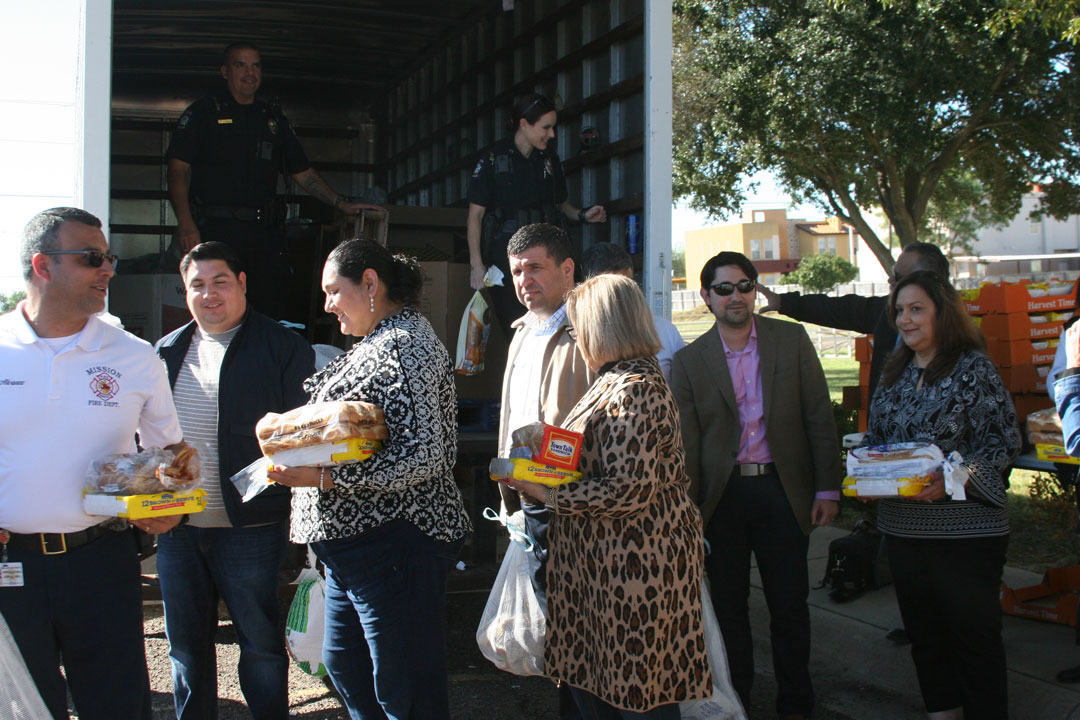 Mayor Armando O’caña thanked the sponsors and city staff who organized the event, saying that the Crime Stoppers have created a program that has become a city-wide tradition for many years. In total, they distributed over 200 meals.

“We are estimating that about 1200 of our citizens will benefit from today’s event,” O’caña said.

Police Chief Robert Dominguez said that the families were selected by different organizations in the city such as the Mission Consolidated Independent School District, the Mission Housing Authority, Rosario Homes and the Community Block Development Grant (CDBG) program, and were issued a voucher to pick up their meals.

Dominguez was pleased with how everyone came together to give back to Mission residents who could use the help this holiday season.

“As the holiday season starts, it’s great and humbling to partake in this great effort,” Dominguez said. “There’s a lot of families in our community that need that extra help.”

Dominguez said many people in Mission are blessed to have the gift of family and friends along with a traditional Thanksgiving meal.

“Unfortunately there’s a lot of families in our community that need the help,” Dominguez said. “We’re just glad to be here today. On behalf of the Mission Police Department, and on behalf of the city of Mission, we want to wish everyone here throughout our community and the Rio Grande Valley a happy holiday season.”

Dominguez introduced Andy Rodriguez, who is part of the Mission Crime Stoppers, saying that none of it would be possible without the organization.

“The Crime Stoppers is made up of community volunteers that put in their time, their efforts and sometimes their resources to make events like this happen,” Rodriguez said. “It’s the time to give, it’s the season of giving, and we feel blessed to do this for people who otherwise wouldn’t have something to eat. It’s just one of many events that we have throughout the year.”

Rodriguez said that while the Crime Stoppers would like to serve everybody, there is only so much they can do with the resources they have.

“I think that’s important, that we do what we can do,” Rodriguez said. “That’s what gives us joy in the season, that we can. Hopefully in the future, we’ll be able to serve even more of our citizens in the Mission area.”

Acting City Manager Randy Perez said the meal distribution is necessary because Thanksgiving is a day for sharing.

“We appreciate all the partnerships that we currently have to make this event a success,” Perez said. “It’s very instrumental for the citizens to know that the city of Mission does every effort to give back to the community.”