Even though his family could not be found, nearly 100 people showed up to ensure he would not be alone at his funeral.

Private First Class Ronald Barker was buried on Monday, Nov. 19 at the Rio Grande Valley State Veterans Cemetery in Mission. As his next of kin could not be found, the public was invited to attend his burial to ensure the veteran was not left behind. 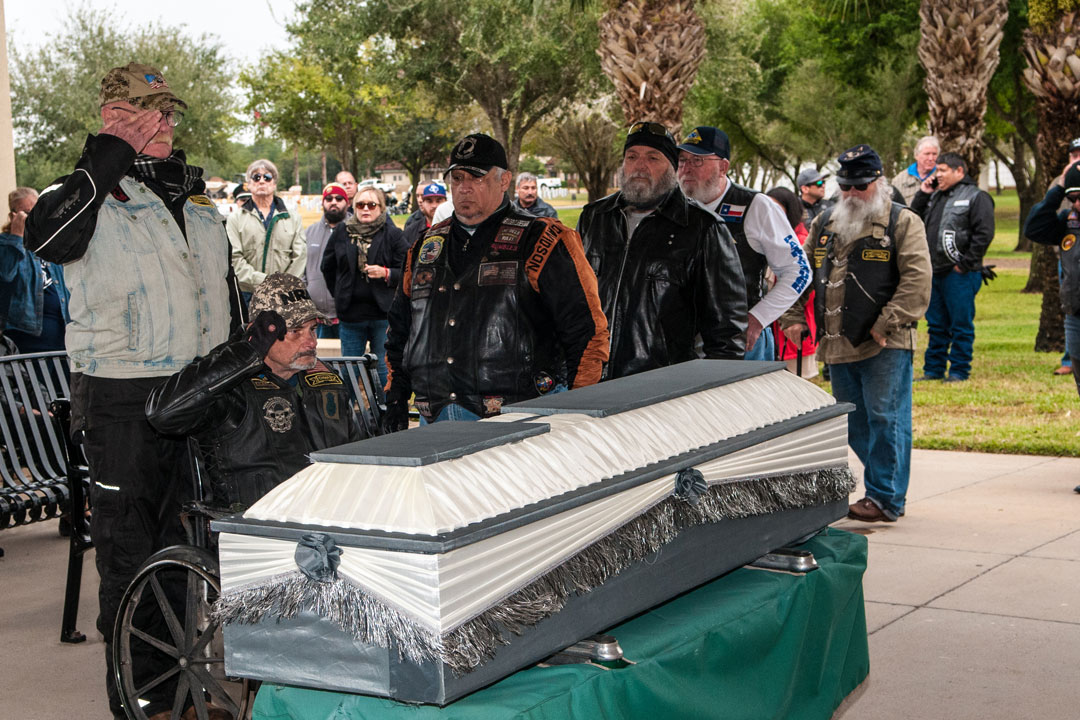 “We’re not here to say goodbye,” Ruben Peña who gave the opening remarks at the burial, said Monday. “Goodbye means we forget, we don’t forget people we love or people who have served and helped us. I thank each and every one of you for being here today.”

Barker was a United States Marine Corps Veteran who served his country during the Korean War for three years starting in 1954, according to information provided by Karina Erickson, a spokesperson with the Texas Veterans Land Board. He was born in Nebraska and was honorably discharged from the Marine Corps at the end of his service. At the time of enlistment, his occupation was listed as a truck driver.

Though information on Barker was slim according to Erickson, Barker was buried in in the Valley after a representative informed the board Barker might have family in the area.

Barker’s military burial was the 93rd unaccompanied military burial since 2015, when the Veterans Land Board implemented a program to bury veterans with no next of kin with military honors or ceremonies.

Before the program was implemented, unaccompanied veterans were either cremated or placed in storage until they could be properly buried, Erickson said.

Lisa Hernandez arrived at the burial with two of her friends. Hernandez, said she was moved to attend after finding out about Barker’s lack of known of kin through social media.

“It’s sad that if it wasn’t for that post, he wouldn’t have anyone here for him,” Hernandez said. “It broke our hearts that he served our country and was probably alone when he died. But he’s not alone today.”

As part of the protocol for burials of an unaccompanied veteran, an onsite representative with the VLB is presented with the United States flag and must hold it for 60 days until the flag is retired or the veteran’s family arrives to claim it.

“It’s difficult doing this,” Rice said after the ceremony. “It’s not about me at all but personally but, I’ve had a lot of friends I’ve had to put in the ground that I was never able to attend their services. The entire time I’m up there that’s all I’m thinking about, them. It’s not easy but it’s an honor that has to be done.”

Rice, who has served in the U.S. Army, said the large crowd attending Barker’s funeral was a sign of strength from the community.

“We’re all tight-knit community with a large veteran population,” Rice said. “All these people from several groups are coming here to pay their respects for someone they didn’t know, it says a lot about our how appreciative they are of the veterans that serve them.”

David S. Silva, a member of the Catholic War Veterans, attended the burial with members of his group. He says that typically, his group attends as many as five military burials a week to show support to fallen veterans.

“It’s an honor for veterans to see the participation from the community to give their final respects to a veteran,” Silva said. “It’s an honor whenever you see a large group giving back to the community in this way. Like how we give so much for them, they are paying it back and showing their appreciation here.”