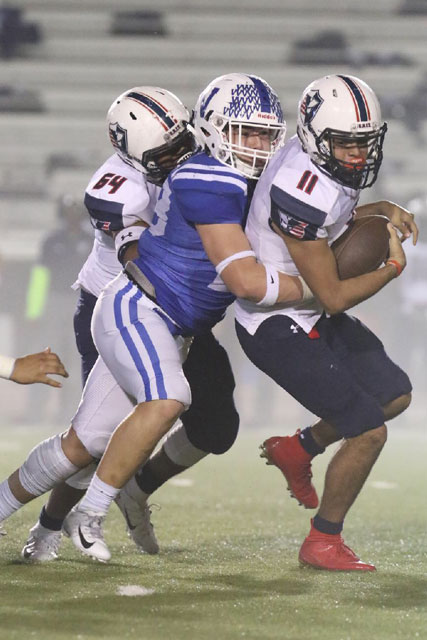 Mission Veterans won its 11th straight game of the year after a 48-23 beat down in the Battle of the Patriots to advance to the third round of the Class 5A Division I Playoffs.

The Patriot offense stumbled coming out of the gate after a three-and-out on their first possession, but the onslaught was on after that.

Landry Gilpin scored five first half touchdowns, four through the air and one on the ground, as the Patriots rolled to a 35-3 lead at the break. Receiver Leo Cantu hauled in three touchdowns passes on the night.

“As of right now, we’re on a roll and we’re not going to stop now,” Cantu said after his big performance. “We’ve been on the ball for a while and it starts at practice. Our coaching staff is one of the best in Texas, we have the athletes to do it and we just work hard every day. We feel unstoppable right now.”

The Mission Veterans defense held San Antonio Veterans Memorial to a field goal on their first drive and didn’t budge the rest of the half. Jazz Vallejo put a stop to the other Patriots’ only hope with an interception to close the second quarter.

In the second half it was more of the same as the Patriots defense continued to lock down their opponent. Gus Garza came down with his second interception of the playoffs with a pick in his own end zone midway through the third quarter.

“We just drive each other, if he gets a pick, someone else wants a pick,” Vallejo said about the turnover hungry Patriot defense. “We’re just trying to compete against each other and I think that brings out the competitive nature in all of us, it makes us do great when we all put it together.”

The win moves the Mission Veterans Memorial Patriots to 11-1 on the year, the first team to do so in program history, and gives them their third gold ball of 2018 with a District, Bi-District and Area Championship to add to the trophy case.

The Patriots will now face Corpus Christi Veterans Memorial (12-0) in the Regional round at 8 p.m. next Saturday, Dec. 1, in the Alamodome.

“The best part is playing with my brothers that I grew up with in middle school and at the Boys & Girls Club,” said middle linebacker Joey Garcia. “We would always talk when we were small about going to play in the Alamodome, and now everything’s coming true.”