The La Joya Housing Authority slapped Mayor Jose A. “Fito” Salinas — and four people the mayor appointed to the housing authority board — with a temporary restraining order Thursday. 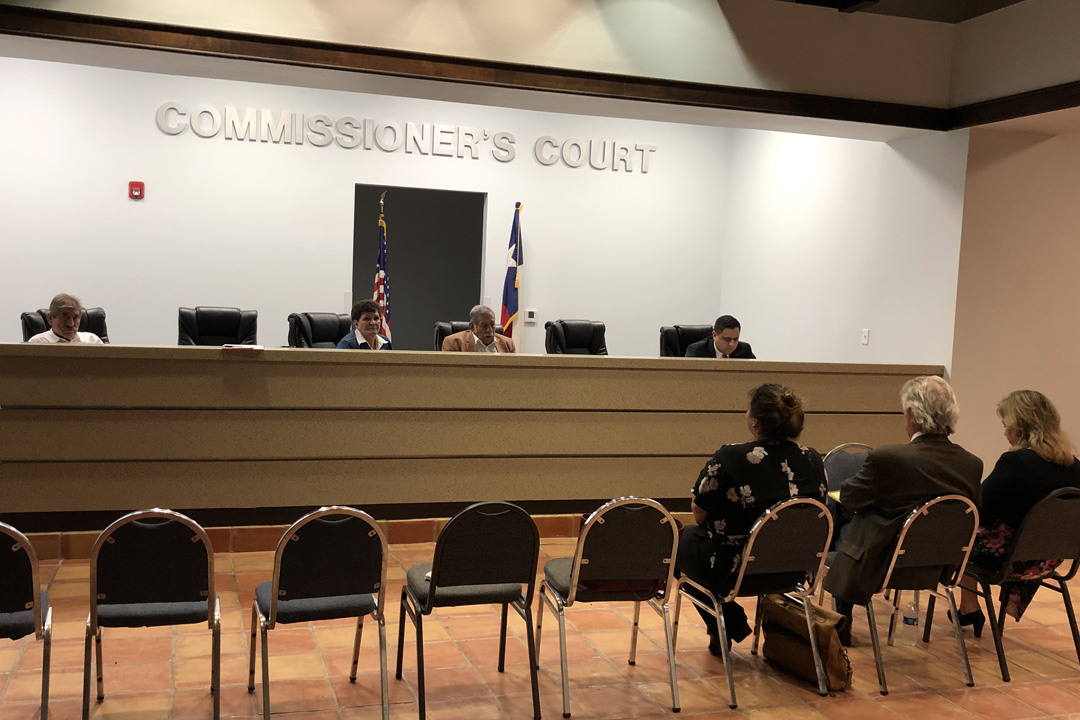 It’s the latest twist in a long-running power struggle between Mayor Salinas and the housing authority board.

Former La Joya school board President Arnold Ochoa, who joined the housing authority board last week, accused Executive Director Cristi LaJeunesse of orchestrating the restraining order against her own board.

“She’s not willing to work with us,” Ochoa said, adding that LaJeunesse dislikes Mayor Salinas, who appoints the housing authority board. “You’re here to do your job as a director. Now the mayor appoints, I don’t know, Donald Trump or whoever he wants to appoint, you need to work with those people.”

Basic questions about the housing authority board, including whether or not Mayor Salinas properly appointed several board members, remain unanswered.

“Everything is frozen so the judge can sort out who the commissioners are,” Daniels said, referring to the temporary restraining order.

Tension between Mayor Salinas and the housing authority board started during October, when the board fired Interim Executive Director Frances A. Salinas, the mayor’s daughter.

The U.S. Department of Housing and Urban Development had problems with Frances Salinas from the start, warning the situation posed a clear conflict of interest. Bank statements also showed suspicious cash withdrawals from a housing authority account.

After weeks of legal wrangling, which involved a lawsuit and a series of special meetings, the board hired LaJeunesse, the executive director of the Kenedy Housing Authority.

“She’s focused on this fight with the mayor,” Ochoa said. “And I told her ‘Look, that doesn’t do any good for anybody or your tenants here if you keep on focusing on that fight.’”

The housing authority took the dispute to court Thursday, accusing Mayor Salinas of attempting to pack the board.

That created a vacancy on the board and left Garces Valdez in limbo.

“Mayor Salinas has attempted to appoint numerous individuals to the LJHA Board of Commissioners without regard to the number of empty or available seats on the Board,” according to an affidavit signed by LaJeunesse, which the housing authority attached to the lawsuit. “Those individuals purportedly appointed or reappointed LJHA Commissioners include Jorge Bazan, John J. Peña, Arnold Ochoa and/or Jose Luis ‘Puma’ Rodriguez. There is confusion and/or misunderstanding by Mayor Salinas as to the terms of office of the LJHA Commissioners. The Mayor’s actions, if effective, have created an illegally constituted Board of Commissioners.”

After reviewing the lawsuit and affidavits, the judge signed a temporary restraining order against the housing authority Thursday morning.

The wide-ranging order blocks Mayor Salinas from removing Garces Valdez and prohibits the four people he appointed from scheduling meetings, entering the housing authority building or even “making any representation” that they serve on the board.

“Why is the housing authority attorney filing a TRO against its own people?” Mayor Salinas said, adding that he didn’t understand why LaJeunesse would attack her own board.

The housing authority filed the lawsuit against Mayor Salinas and four people he appointed to the board: businessman John Peña, who also serves on the La Joya Economic Development Corp. board; businessman Jorge Bazan, a contractor who services air conditioning systems; former La Joya school board President Arnold Ochoa, who also serves as a reserve police officer for the city; and Jose Luis “Puma” Rodriguez, who the mayor appointed to represent housing authority tenants.

“Puma was never sworn in,” Mayor Salinas said. “The (City) Council approved him, but he never showed up.”

State law reserves one seat on the five-member board for a housing authority tenant. However, the law includes an exception “if the presiding officer has provided timely notice of a vacancy in the position to all eligible tenants and is unable to fill the position,” according to the Texas Local Government Code.

Mayor Salinas said he appointed Ochoa, the former school board president, when he couldn’t find a tenant willing to serve.

The housing authority, though, didn’t advertise the tenant position or send letters to residents about the opportunity.

Mayor Salinas said the board also includes Garces Valdez, the former public relations consultant for the city; and German Reyna, who works for the La Joya school district.

When, exactly, Reyna joined the board remains unclear.

City meeting minutes from January 2016 to November 2018 don’t include any reference to Mayor Salinas appointing Reyna.

Three members of the board — Ochoa, Bazan and Peña — met at noon Thursday without the executive director or attorney present.

Apparently unaware of the temporary restraining order, they elected Peña chairman of the board and voted 3-0 to “terminate this attorney.”

Bazan said they were referring to Daniels, the housing authority attorney who, unbeknownst to the board, had just filed a lawsuit against them.

“At this point, with the instability and uncertainty of the board, you really would think that they do need competent legal advice,” Daniels said, adding that he considered the board meeting illegitimate.

Disregarding the decision to terminate him, Daniels accompanied Garces Valdez to the new City Hall on Thursday for a hearing on the misconduct allegation. City Attorney Kennedy Salinas canceled the meeting after Garces Valdez arrived.

The judge scheduled a hearing on the temporary restraining order for 1:30 p.m. on Dec. 11 in Hidalgo County Court at Law #6.