Bringing the family-centered story to life for the first time at VMHS, the theatre department and drama club are excited to incorporate popular songs, new dance numbers and fun in their production of “Mamma Mia.”

The Veterans Memorial High School Harlequin Drama Club has selected the famous Broadway classic for their musical this year, and are set to perform it at the end of Nov. and beginning of December. 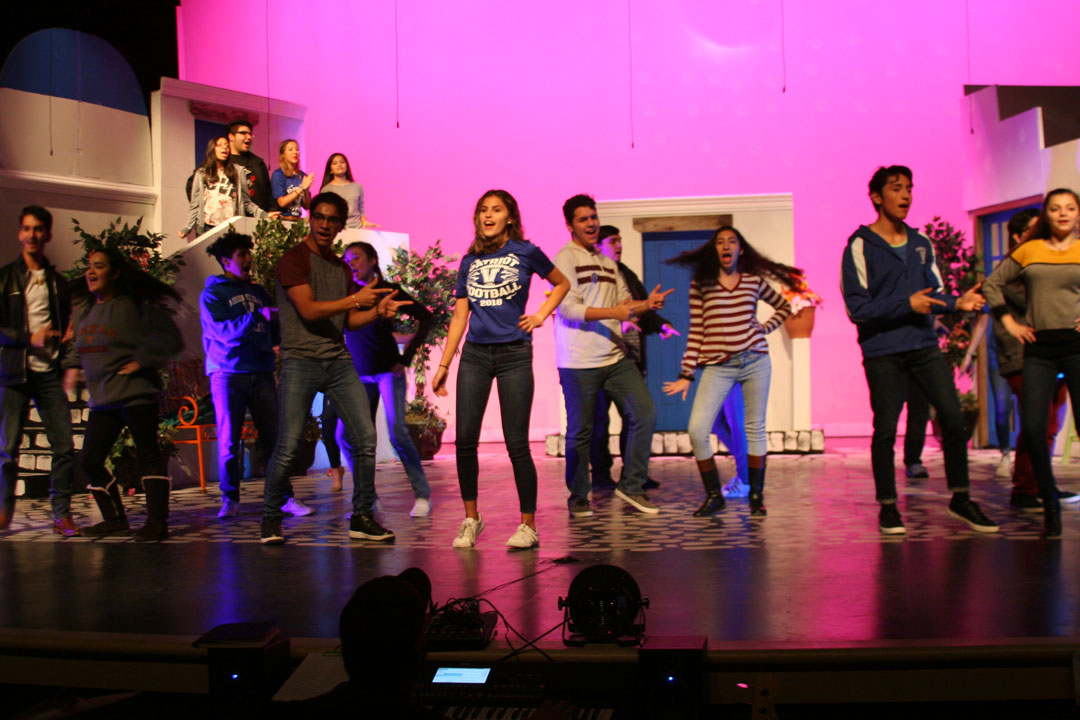 Auditions for the musical started the second week of school, but the ensemble began rehearsing the songs as soon as the school year started. After rehearsing for three months, the students and directors are ready for the show to go on.

As this is the first year the rights to “Mamma Mia&rdquo; were made available by Music Theatre International, VMHS has again become one of the first high schools to put on a production of the show in the Valley, after bringing shows such as “Chicago,&rdquo; “Hairspray,&rdquo; Sweeney Todd&rdquo; and “The Great Gatsby&rdquo; to the area in the past. Directed by James Hodgson and Laura Sierra, it&rsquo;s a big production with a large set and bright lights – fitting for the themes and songs by famous Swedish pop group ABBA.

The students in the production expressed their excitement and nervousness at performing “Mamma Mia&rdquo; for the public.

“It&rsquo;s going to be the biggest production in the Valley,&rdquo; said sophomore Catherine Cavazos, the Vice President of the drama club and a dancer and singer in “Mamma Mia.&rdquo; “Everyone has worked so hard.&rdquo;

Cavazos said rehearsals have been rigorous.

“We&rsquo;ve really raised the bar this year,&rdquo; added sophomore Benjamin Garcia, who plays the role of Henry in the show and did the marketing and advertising for the production. “We&rsquo;ve learned choreography and songs in such a short period of time.&rdquo;

The students spoke about their favorite songs and dance numbers in the show, particularly “Voulez-Vous&rdquo; and “Mamma Mia.&rdquo;

“I love all the solos because of how much emotion is put into it,&rdquo; said senior Kathrine Hallquist, the President of the drama club and head stage manager of the show.

“You can feel what the character is trying to give off to the audience.&rdquo;

For Hallquist, seeing the entire production complete is the most rewarding part of the process.

“Just seeing it all come together in the end and just flow as one whole thing, it&rsquo;s amazing to watch,&rdquo; Hallquist said. “It emphasizes the importance of family and where family comes from.&rdquo;

Freshman Andre Hodgson, a singer and dancer in the show and part of the construction crew, hopes people have fun and take the message with them when they see the show.

“I&rsquo;m really anxious to see the general reaction from the audience,&rdquo; Hodgson said. “I can&rsquo;t wait to see if they feel happy or sad, and if they like it.&rdquo;

“Mamma Mia&rdquo; is VMHS&rsquo;s official submission for the second annual Palm Awards here in the RGV. Schools competing in the Palms participate in a One Act Play style competition that culminates in a large awards show at the end of the fall theatre season.

The students noted that they aren&rsquo;t in this for the awards.

“If we win something, then we greatly appreciate it, but we just want to put on a good performance,&rdquo; Hallquist said. “It&rsquo;s not done to win something, it&rsquo;s to show the public our very best.&rdquo;