The Mission Veterans Memorial Patriots knew they were in for a fight heading into the regional semi-finals against Corpus Christi Veterans Memorial, and after four quarters of play inside the Alamodome, the team from the Rio Grande Valley was the last one standing.

The Patriots outlasted the Eagles 62-55 in a shootout where both teams exchanged big-play for big-play like heavyweights exchanging haymakers inside the ring. 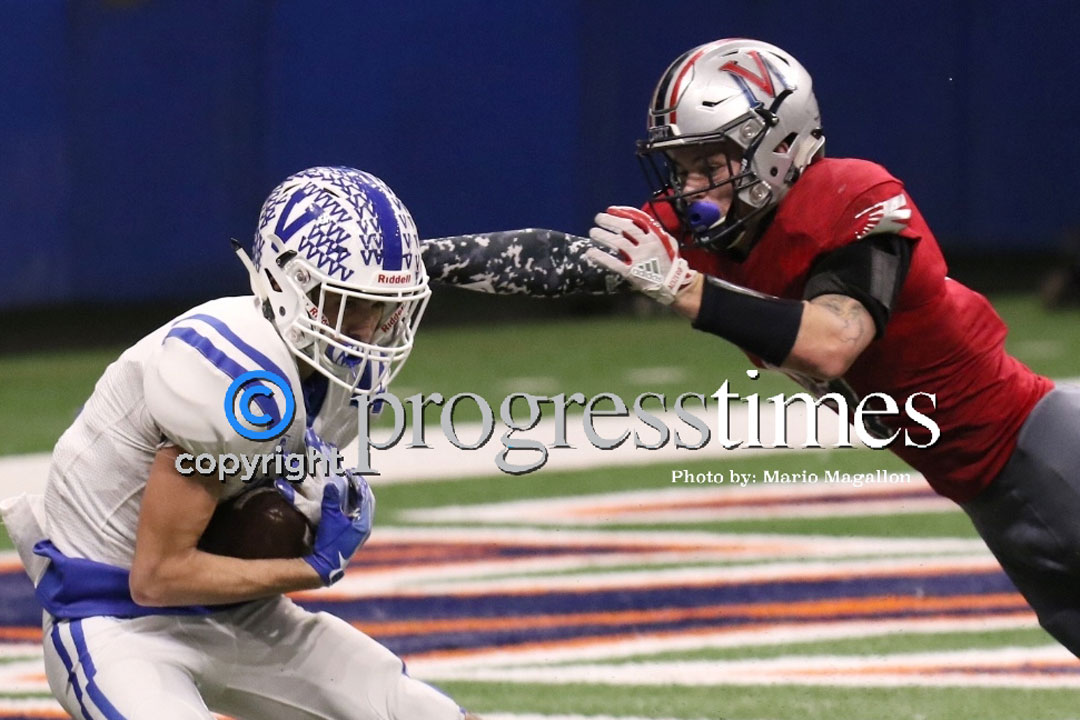 “That’s one of the most impressive performances I’ve ever seen, and in a third round game, for a ‘Valley weak’ school, that ain’t supposed to be playing with Victoria East, Judson Veterans Memorial, C.C. Veterans Memorial,” said Head Coach David Gilpin after the win. “That team was 12-0 rolling over everybody. We had a bunch of kids leave it all out on the field and I couldn’t be more proud of this team.”

Mission Veterans hadn’t been in a close game since Week One, but they knew they needed 48 minutes of solid football in order to advance to the fourth round, and they got it.

The Patriots scored the game’s first points as Landry Gilpin connected with Ralph Ochoa for a 23-yard score to go up 6-0. After an Eagles field goal, the Patriots added three more first half touchdowns on throws to Leo Cantu, Mikey Garcia and John Aguilar to take a 27-24 lead heading into halftime.

As both offenses continued to find success, it was the Mission Veterans defense who made the biggest play of the night.

With the scoreboard reading 47-45 in favor of the Patriots, Mission Veterans was forced to punt which Mike Gonzalez downed at the Eagles’ one-yard line. Three plays later, Patriots’ outside linebacker Jazz Vallejo baited the C.C. Vets quarterback into throwing in his direction and sprang into the air for the interception which he ran back five yards for the pick-six to make the score 54-45.

“It means a lot to be able to help my team like that and I felt the love when I got to the sideline,” Vallejo said. “That’s what I had to do, I got the ball and I knew I had to score and that’s all she wrote. “It means a lot because it was always a dream to get here, and I never thought it would happen until we put it all together here in my senior year. It means alot to me, my friends and family, and especially my city, that’s all that matters.

The Eagles refused to quit and kept marching down field threatening to score. After a field goal trimmed the lead to 54-48 late in the fourth quarter, the Patriots offense needed to make a play to seal the victory.

And if your offense needs to make a play, there’s no one better to give it to you than Landry Gilpin. Gilpin ran through and around the Eagles’ defense for a 31-yard rushing score with 1:33 left in the game to put the Patriots up 62-48 and lock up the win for the last Valley team standing.

“I hold myself and my team to very high expectations,” Landry said. “As excited as I am, I knew this is what we were looking at doing and it’s an amazing thing when you finally execute everything as players and coaches and get it done.”

While Landry was happy with his record-breaking performance in the third round, he was quick to give credit to those around him who allow and help him to succeed as one of the best high school quarterbacks in the nation.

“I wish they knew how beneficial it is to have a team like I do,” he said. “They allow me to do a lot of things not a lot of quarterbacks get to do, and I appreciate all the eyes on me, but it wouldn’t be possible without my teammates.”