As the Mission Veterans Patriots football team prepares for their Regional Final playoff game against the San Antonio Wagner Thunderbirds tomorrow morning, some may be surprised by the fact that they have advanced into the fourth round of the UIL state playoffs for the first time in school history.

However, there is one person that is not at all surprised by the Patriots’ unprecedented success this season. As a matter of fact, he predicted almost the exact same thing that the Patriots are achieving now and he did it months ago! 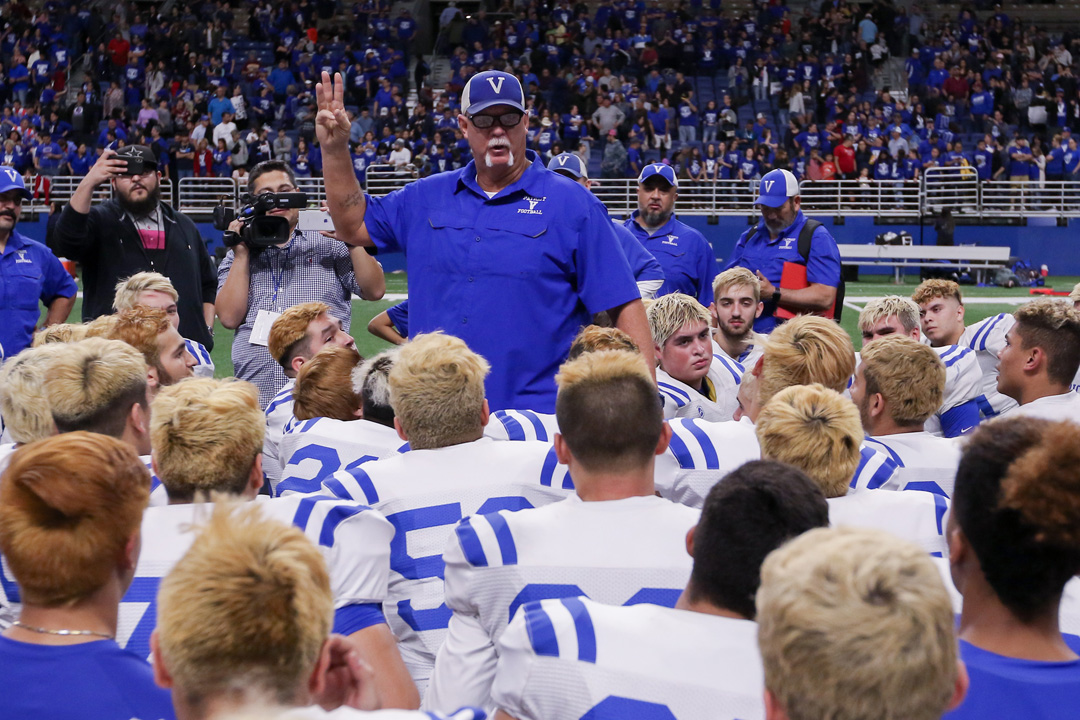 So who is this modern day Nostradamus of the gridiron? None other than Mission Veterans head football coach and athletic coordinator David Gilpin, that’s who.

The date was August 6, 2018, 25 days prior to the Patriots’ season opener against the Mission Eagles in the Battle of Conway, and Gilpin was sitting at his desk sharing his thoughts about the upcoming football season with yours truly. Approximately 15 minutes into that interview, Gilpin mentioned the fact that he overheard me asking one of his players how far the Patriots had ever advanced into the playoffs. He then proceeded to not only answer that question for me, but to make the kind of predictions about what he believed his team was about to achieve that I had never heard a coach go on the record with.

“We’ve advanced into the second round of the playoffs four years in a row,” Gilpin said. “That includes a third round appearance two years ago. And our goal is to shatter that this year. People in the Rio Grande Valley don’t talk about what we’re talking about doing. I don’t care what anybody thinks about what I believe we can do this year. I’m talking fifth round this year. I’m talking final four and regional champions.”

As surprised as I was to hear a head football coach utter such a bold prediction about his own team, the kind of prediction that when published had the potential to be used by opposing coaches as bulletin board material, Gilpin then raised the stakes by adding the following,

“Only four Valley teams in the past 28 or 29 years have been to the fourth round. So we don’t talk about the fifth round or about being a Regional champion in the Rio Grande Valley. But I believe that we have the kind of team that can accomplish this and I’m not scared of being laughed at for saying that. I believe that we’ll be 14-0 and playing the Region III champions this year. So get on the bandwagon now because if things go right, and we’re able to keep our key pieces on the field, this could be a fun ride.”

So here we were almost a month before the Patriots would be taking to the turf at Tom Landry Hall of Fame Stadium for their season opener against the Mission Eagles, and Gilpin is talking about an undefeated season, district, bi-district, area and regional championships and a state final four appearance. As crazy as that might have sounded at the time, the fact is that were it not for their 24-12 non-district loss to Mission, the Patriots would now be just one win away from making every single one of those “crazy” predictions come true.

Now we wind the clock forward to Monday of this week and Gilpin and I are sitting in his office for an interview once again. I begin by reading his own words back to him and I see him smile when I get to his quote about getting on the Patriot bandwagon now. I then proceeded to tell him how surprised I was by the fact that he was willing to go on the record with such bold predictions about his team and I asked him what it was about this team that made him confident enough to be willing to do so.

“First of all I believed in everything I said 100% when I said it and I had no problem putting it on the record,” Gilpin replied. “And everything you’ve said about my quotes being potential bulletin board material is exactly right. I could see others reading my predictions of a 14-0 season and laughing at me and thinking that I’m crazy. That would be completely understandable. As a matter of fact, if it was somebody else saying these things, maybe I’m laughing at them. But I knew what we had on this football team. I knew that we had a very high number of very, very good players.”

“We’re not track guys and we’re not powerlifters but what we have is guys that train what we train,” added Gilpin.

“And that is explosiveness, burst, acceleration and change of direction. This is what we do in our offseason and throughout our summer conditioning program and as a result when it comes to getting from point A to point B on the football field, we’re quick. But more than anything else, we’ve got a mindset of physicality because we not only talk about being fast, we talk about being physical.”

Gilpin went on to explain how he not only saw this team’s potential for greatness going into this season, but he saw it four years ago when the seniors on this team, including his own son and Patriots’ quarterback, Landry, were freshmen.

“Four years ago when Landry was a freshman he was on the varsity team, but I talked to the other freshmen and I told them that I believed that by the time they were seniors they were going to do something special,” Gilpin said. “Then when the next group of freshmen came in, I told them that their junior year, which is this year, was going to be something special. As high as my expectations were at that time, they’ve been heightened as those players developed, and as I saw what kind of athlete Landry was going to be.”

One of those freshmen Gilpin spoke to four years ago is Erik Espinoza. Espinoza is now the Patriots starting center. After reading Gilpin’s preseason quotes to him, I asked him what having his coach have so much confidence in him and his teammates has meant to him.

“A lot of people may have thought he was crazy for saying that we’d go 14-0, be in the final four and have five gold footballs, but it helped us to believe in ourselves,” Espinoza said. “Knowing that our head coach had so much confidence in us that he was willing to say those things actually instilled a belief in us that we are champions and that we could do whatever we wanted on the field no matter what.”

Senior middle linebacker Joey Garcia was also part of the freshman team Gilpin spoke to four years ago. When asked what having a coach that had so much confidence in him and his teammates that he was willing to go on the record with such bold predictions meant to him, Garcia said, “Having him say that we could go to the fifth round feels good. Look where we’re at now. We’ve worked super hard all summer and during the offseason and now we’re here in the fourth round. And even as far back as February, Coach Gilpin would always say that we could go this far and we all believed that it could come true.”

So how did Patriots’ head coach David Gilpin come so close to predicting what his team is in the process of accomplishing this season months, and even years, ago? I can’t say for sure, but I suspect that along with all the gold balls the Patriots have accumulated over the years, there may just be a crystal one in there somewhere.