Mission Veterans Head Coach David Gilpin guaranteed his team wouldn’t go down without a fight and he was right as the Patriots fought ‘til the clock read 0:00 in a 54-21 loss to the Wagner Thunderbirds in the Region IV Class 5A-DI Championship game Saturday at the Alamodome.

“The one thing that I knew we could promise walking in here today against a team that was obviously more talented than us, obviously bigger than us, the one thing I could promise is that our kids would have no fear, and they did not,” Coach Gilpin said after the 4th round loss. 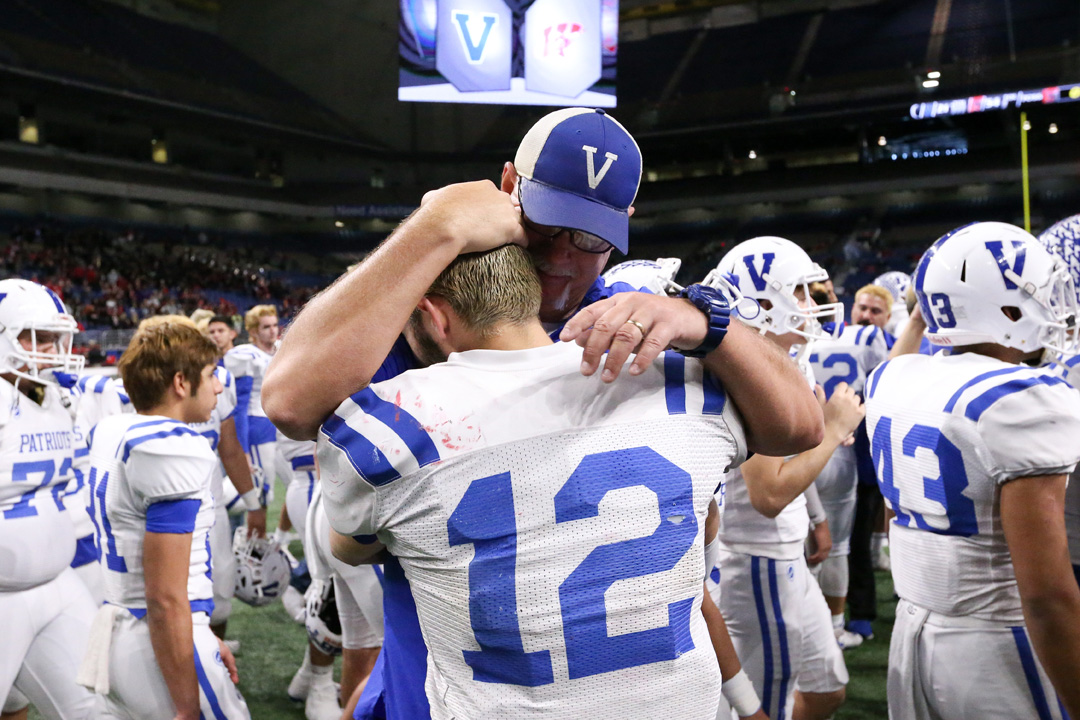 Wagner’s physical advantages were evident as they marched downfield for a touchdown on their opening drive. On the Patriots’ first possession, the Thunderbird pass rush proved to be a problem as they totaled five sacks of Mission Veterans quarterback Landry Gilpin on the night..

Landry Gilpin connected with AJ Gonzaque for his team’s first points to send the game into the locker room with the Patriots down 21-7.

The Mission Veterans offense began to find its groove in the second half with touchdowns on consecutive possessions by Landry Gilpin to the speedy, deep-threat Mikey Garcia to make the score 35-21 midway through the third quarter.

“They got some good pressure on Landry in the first half, we struggled with some of that,” said Coach Gilpin. “We made some good adjustments at halftime and our offensive line really picked it up and did a great job in the second half. It’s like I told the kids, it was 35-21 with four minutes left in the fourth quarter and we had a shot.”

After another Wagner touchdown, the Patriots again made their way downfield and appeared to score once more after a diving catch by Gonzaque in the end zone, but referees would rule the pass incomplete and give the ball back to Wagner who turned it into points.

Landry Gilpin finished with 312 passing yards, three touchdowns and two interceptions. Gonzaque halued in six catches for 85 yards and a score while Garcia had four catches for 116 yards and two touchdowns. Linebacker Jesse Gonzalez and defensive back Michael De Anda came away with interceptions of Wagner’s Tobias Weaver and outside linebacker Mike Rodriguez recovered an L.J. Butler fumble.

David and Landry Gilpin’s time as Head Coach and quarterback comes to an end, but with four gold balls for the 2018 Mission Veterans Patriots.

“We always knew it was going to be a bittersweet moment when it came to an end and that’s exactly what it was,” said Landry Gilpin. “It’s amazing, man, it was a blessing.”

“That’s a good group of kids I spent a lot of time with, obviously my son is on the team and I’m not going to do this with him again,” said Coach Gilpin. “I won’t stand on the football field with this team anymore, and it hurts, but it is what it is. We got to move forward, those boys got to move on to the next step of their life and we got to get the 2019 football team ready.”

The Mission Veterans Patriots season comes to an end with a 12-2 record as District, Bi-district, Area and Regional Semi-final Champions.

The Patriots’ side of the crowd outnumbered the Wagner fans, and Landry Gilpin said he was proud to be part of something the whole Valley rallied behind.

“It’s amazing to be part of something this big and it’s a blessing to have all the support that we do,”Landry Gilpin said . “I’m happy that I got to experience it, happy that my teammates and coaches did, and the community was on fire, so I’m happy about that.”