MISSION, TEXAS – In 1917, Woodrow Wilson was the U.S. president, the United States had just entered World War I and Esperanza Barrera Vasquez was born on December 12, marking her grand entrance into the world.

Born 101 years ago, Esperanza, a lifelong resident of Mission, Texas, is one of over 70,000 centenarians living in the United States today. She is one of more than 2,000 in the state. 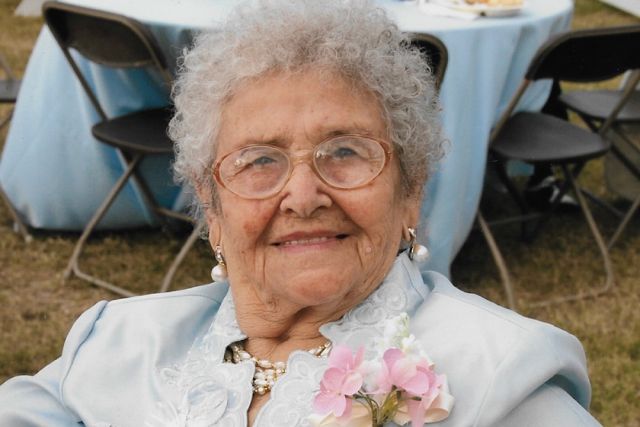 She was born in Valadeces, Tamaulipas, Mexico to Felipe and Amada Barrera. In January 1918, a few weeks after Esperanza’s birth, the couple made a life-changing decision to cross the Rio Grande River by ferry, or chalan, to start a new life in La Grulla, Texas.

Esperanza is one of seven siblings – four sisters and two brothers, who have since passed on.

In her lifetime, Esperanza has experienced many joyous moments and has suffered a multitude of heartaches. One of her happiest times was when she married the love of her life, Jesus Emilio Vasquez, on Dec. 21, 1935 in Lubbock, Texas. After that, they made a home for themselves in Mission where they raised their brood of 13, seven sons and six daughters.

The majority of her time was spent as a stay-at-home mom, making sure her children were taken care of. With such a big family, money was tight, and Esperanza was big on hand me downs for all her kids.

Her children would complain about how she would make them wear secondhand clothes, but as adults they understood she would make do with what they had and provided all of them with a loving home the best that she could.

In the 1950’s, Esperanza and Jesus took their family on the road as they traveled for several years to work seasonally as migrant farmworkers in the fields of Michigan, Ohio and Idaho. While her family worked in the fields, Esperanza was back in the migrant camps preparing meals and taking care of the youngest of the bunch.

In 1956 at 39 years old, Esperanza became a U.S. citizen, which served as another highlight in her long life.

Her life has also been marred by tragedy with the loss of six of her children, and then the death of her husband in 1993. In the midst of sadness, Esperanza always overcame and remained strong for herself and family.

In her earlier years, Esperanza regularly enjoyed a night out of dancing with Jesus, her dance partner for life.

The pair was known for crashing weddings and quinceañeras on the weekends to dance the night away. Esperanza made sure to take a gift with her so they did not go empty-handed.

In her later years before her dementia progressed, she was a regular at the Amigos del Valle in Mission, where she made lots of good friends and enjoyed participating in arts and crafts projects, of which she distributed among her family.

Her pastime was bingo, which she loved to play weekly and on weekends, often times with her daughters, daughter-in-law and grandchildren. Her other passion was playing the slot machines at any casino in the country, but her favorite was Las Vegas. She loved to gamble and just have a blast with her family.

She was a fashionista as well. She usually rocked some type of animal print or sparkly outfit.

Esperanza loved to break out her fur coat when the weather was just right in the Rio Grande Valley. She taught her family how a little sparkle and shine can change your life.

She is a grandmother to 35 grandkids, who affectionately call her “Wela Esperanza” or “Ama,” and has an abundance of great-grandkids and great-great grandkids – too many to count.

For the past several years she has been bedridden at her home in Mission due to dementia. The condition robbed her of memory and speech, but not of her big heart. Her daughter, Diana Garza, and son-in-law, Luis Garza, have dedicated themselves to taking care of her.

For Esperanza, her family is everything and in her 101 years she has had no regrets. Even in her moments of grief and sadness, she just kept on keeping on and continues to celebrate life and move forward; as we all should aspire to do.