The Winter Texans living at Split Rail RV Park got an early Christmas treat this year when elementary students visited and performed a musical that celebrates the holiday and Mexican culture.

Leal Elementary 4th and 5th grade choir students put on “A Sombrero for Santa,” a musical by Michael and Jill Gallina, where Santa Claus has to travel to Mexico in order to learn Spanish. Winter Texans living at Split Rail RV Park in Mission gathered and watched the choir of students sing and perform. 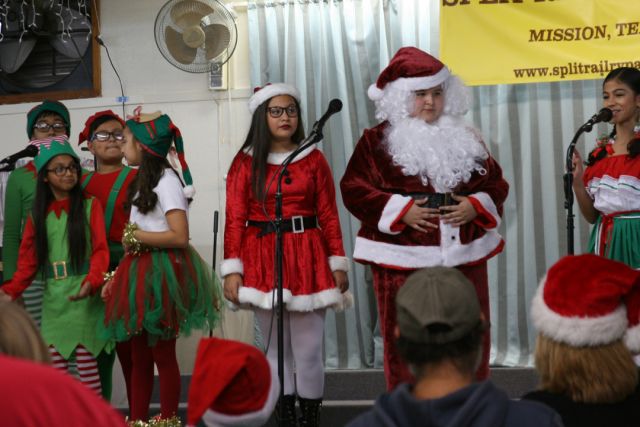 Elda Flores, the director of the show and music teacher at Leal Elementary, has been working at the school for 21 years. She spoke about how hard the children worked on the show, and mentioned that they would be showing off their singing, dancing and acting skills for the audience.

“These kids are very special to me, I see them in a totally different environment with music,&rdquo; Flores said.
David Wagman, a full-timer from Philadelphia who has lived in the Rio Grande Valley since 2014, was excited to see the kids perform. He enjoys the area and all it has to offer year-round.

“Everybody&rsquo;s really friendly, the weather is awesome,&rdquo; Wagman said. “The cooking is making me jolly.&rdquo;

Wagman lives in the park, so he was ready for the festivities to begin Wednesday morning.

“I love this stuff,&rdquo; Wagman said. “My son [who lives in McAllen], he&rsquo;s in the marching band, the jazz band, so he does these kinds of things all over. So I like to go out and support.&rdquo;

“A Sombrero for Santa&rdquo; includes music and dialogue that incorporates the traditional Christmas themes of giving and kindness with the cultural flair of Mexican music, costumes and food. By the end of the show, Santa dons a sombrero in place of his usual red cap, and thanks the Mexican people he visits for removing his “language barrier&rdquo; and showing him a whole new way to celebrate the season.

Flores wanted to illustrate the importance of the children&rsquo;s culture, and honor the holidays by highlighting that varying cultures can come together no matter what.

Flores felt it was important for the children especially to learn from the musical and embrace who they are. She said that one of her students noticed a Canadian flag hung up on the wall by the country flags, and said it was a great thing to observe.

“It&rsquo;s a wonderful thing, because this country is about acceptance and diversity,&rdquo; Flores said. “And I want these children to always be proud of their family&rsquo;s last name, where their family came from, the language that most of them speak and to never be ashamed of that. Nobody can take that away from them.&rdquo;

Shirley Franey, originally from Iowa has been spending six months out of each year in the RGV over the last for 14 years. She was happy to see the kids put on the performance and get everyone even more in the Christmas spirit, and said that Split Rails often gathers school supplies for the local districts.

“We collect school supplies and take them over, and then they put on this program for us,&rdquo; Franey said. “The singing, and the kids&hellip; It&rsquo;s really great.&rdquo;

When the students had finished their gift for the Winter Texans, the residents at Split Rail surprised them with a gift of their own: a visit from Santa Claus and Mrs. Claus themselves. They took pictures with the children and thanked them for their performance.

“I just want the kids to know to be proud of where they come from,&rdquo; Flores said. “I think that bringing our Winter Texan community together through music is another way of getting everybody involved and spreading a positive message on how we need to be this time of year.&rdquo;