For Dina Cerda’s son Nolan, meeting Santa was at the top of his list of activities at this year’s family Christmas party in Mission.

The city held a family-friendly party for all city employees last Thursday. While they still put on their more formal annual dinner for employees the next day, the event on Thursday was specifically meant for everyone to come together. 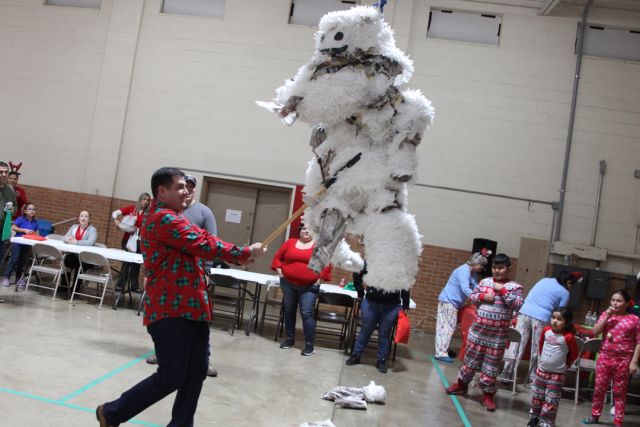 The party, which was held at the Mission Parks and Recreation gym, was themed after “The Polar Express” book and film. It included an evening of interactive games, arts, crafts, a couple of inflatable moon jumps and figures, a screening of “The Polar Express,” dinner, dessert, snacks, train rides and a large Abominable Snowman piñata for the kids to enjoy.

“I think it brings us all together,” Cerda said after four-year-old Nolan took his picture with Santa Claus. “Our families need to have fun for Christmas too, not just the adults.”

City employees and their children were encouraged to wear their pajamas, in spirit with “The Polar Express,” and take pictures of the many offerings and displays for the kids. The party was organized by the Mission Historical Museum along with several other city departments.

Cerda, who works for Mission as a police officer, was grateful for the separate party specifically for families.

“They’re doing something good for the kids,” Cerda said. “My son ran to Santa as soon as we got here, so I think it’s a good thing. It’s something the kids will always remember.”