This story was originally published in the Progress Times issue dated Friday. Dec. 21, 2018.

Serving as a firefighter for the last 25 years has been a dream come true for Homer Salinas, a lieutenant with the Mission Fire Department. 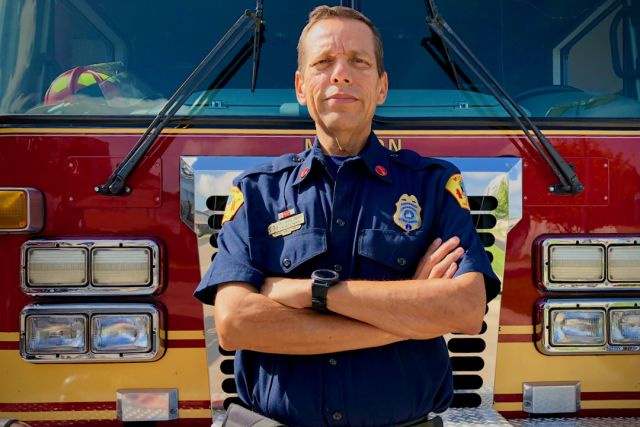 For Salinas, this enthusiasm for his career has only increased over the years, even after he was diagnosed with kidney cancer in December 2017. He took a leave of absence shortly afterward and was placed on paid financial leave last March.

After starting treatment at M.D. Anderson in Houston last year, Salinas said Tuesday he has been cancer free and back on the job since this past June.

“I’m currently on desk duty due to an injury but I am happy to be back at work,” Salinas said. “I’m still receiving checkups at M.D. Anderson every three months and have one scheduled in February. They were aggressive with the cancer treatment because it is an aggressive form of cancer.”

Studies show firefighters are at an increased risk for several cancers and numerous other illnesses caused by on-the-job exposure to hazardous materials. The International Agency for Research on Cancer has cited the higher risks of kidney cancer among firefighters, a news release from the Texas State Association of Firefighters (TSAFF) stated.

According to NBC News article dated October 2017, cancer is the main cause of death among firefighters across the country with at least three active or retired firefighters being diagnosed with cancer per month.

Salinas said he is the sixth firefighter in the Mission Fire Department to receive a cancer diagnosis in the last 12 years.

“And three of those have passed away,” Salinas said.

Besides battling cancer, Salinas and the city of Mission have been disputing with the city’s health insurance carrier-Texas Municipal League- who denied covering Salinas’ cancer treatment.

Salinas said Tuesday that he is seeking $100,000 from the insurance carrier to assist in covering for four surgeries he underwent as part of his cancer treatment.

At a February news conference, representatives with the TSAFF said Salinas was exposed to carcinogens as part of the hazards of his work as a firefighter that led to his cancer, and Chapter 607 of the Texas Government Code, known as the “presumptive statute,” ensures treatment of job-related illnesses.

According to the news release, this was the fourth time TML appealed a September 2018 ruling from the Texas Benefit Relief Council that Salinas, who paid for his cancer treatment privately, “sustained a compensable injury, in the form of an occupational disease.”

“Homer Salinas has defeated TML through four rounds of proceedings. His fight just shows that TML and city employers too often deny coverage of life-saving cancer treatment for firefighters with legitimate insurance claims,” TSAFF President John Riddle stated in the release. “With state law clearly on our side, TSAFF and Texas firefighters will continue to fight to hold these insurers accountable.”

A request for comment from a TML spokesperson was unreturned as of press time.

Salinas said he felt relief at the latest ruling but worries that TML will continue to find ways to deny his claim.

“TML is spending more money fighting my claim than what my claim is actually worth,” Salinas said. “We need to make a change to protect those who protect us. Insurance companies have to abide by the law as provided by Chapter 607 but insurance companies are fighting this so much that most firefighters either die from their cancer or give up fighting TML.”

Despite the continuing battle with TML, Salinas was able to reflect on the changes made within the last year by the city of Mission to assist him and other firefighters.

As previously reported, the city changed sick leave policies for cancer-stricken employees last March to grant 18 months of paid leave for firefighters presumed to receive an illness or injury in the line of duty. The city also announced it was considering litigation against TML if Salinas did not prevail in his appeals of the treatment denials.

With support from the city and coworkers, Salinas said, he hopes his battle with TML will create change for the benefit of firefighters.

“I’m getting calls from firefighters all over the state who have similar issues with TML and they’re voicing support and also hope I prevail,” Salinas said. “I have seen coworkers and friends who have died fighting their cancer and their insurance company. That needs to change.”