It’s been said that there are only two kinds of coaches, those who have been fired and those who will be fired.

While this may or may be a bit of an exaggeration, the fact is that those who choose to go into coaching do it with full knowledge of the fact that job security is definitely not one of the perks. With that being said however, for every coach who has ever been fired or ever will be fired, one is hired to take his or her place. So the carousel keeps turning regardless of who may be getting off and who may be getting on. That is simply the nature of the coaching profession. 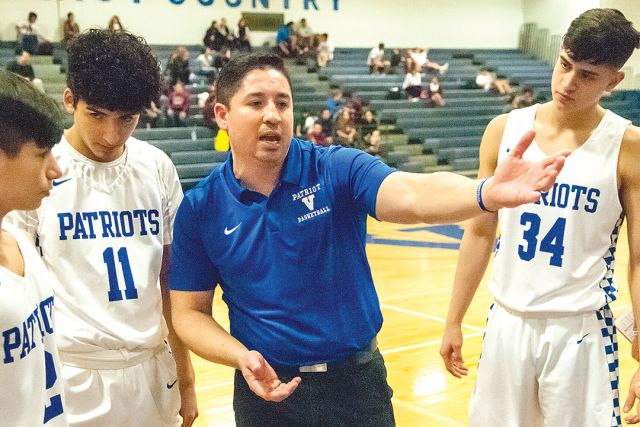 Here in the Valley, the girls’ high school basketball teams tipped off their district schedules this week and the boys are preparing to do the same later this month.

Of the 14 teams from the Mission, Sharyland and La Joya school districts, six are being led by different coaches than they were last year. Of these six, three are assistants who have been promoted to head coaching positions, two were already head coaches last year but of different Big 7 teams and one is new to coaching a Big 7 team.

The three former assistants who have been promoted to head coaches are the La Joya Lady Coyotes’ Juan Gonzalez, the Mission Lady Eagles’ Monica Detmer and the Juarez-Lincoln Lady Huskies’ Irlanda Amador. The two head coaches who have changed teams are Palmview Lobos’ Albert Carrillo and Juarez-Lincoln Huskies’ Adrian Trevino. The new coach to the Big 7 is Mission Veterans Patriots’ Jose Ramos.

While his most recent position was as the La Joya boys’ junior varsity coach, Juan Gonzalez is now the Lady Coyotes’ head basketball coach. The fact that he is new to this position does not mean that Gonzalez is new to La Joya High School.

“I was a two-year varsity starter for the Coyotes basketball team and I graduated from La Joya High in 2006,” Gonzalez said. “I’ve coached the Lady Coyotes before under Coach Adrian Morales. I’ve also coached the Coyotes boys under Coach Rick Cantu and more recently I coached the boys’ JV team under Coach Eric Montalvo. So I’ve been at this for quite a while and now that I’ve been given this opportunity, I want to make the most of it.”

As Gonzalez went on to explain, part of making the most out of his new position as the Lady Coyotes’ head coach is instilling his coaching philosophy and making the girls basketball program his own.

“Whenever a new coach takes over a program there’s always going to be tug and pull,” Gonzalez said. “It is normal for the players on the team to favor the former coach. Personally, I don’t wish ill on anybody by wanting them to get fired or anything like that, but stuff happens and this is my opportunity to build my own girls basketball program here at La Joya.”

“As for my players, I only have one returning starter and that is Giselle Villarreal,” Gonzalez added. “While I do have three seniors and two juniors on this team, we are extremely young experience-wise. With seven or eight sophomores on the roster, we’re also young age-wise. Therefore one of my main goals this year, other than winning games of course, is to give everybody some experience so that they can help me out in the future.”

“I started coaching under the Lady Bulldogs’ Coach Teresa Casso,” Ramos said. “I coached with her at different levels, including freshmen, JV and JV Dark, for five years. After Coach Casso retired, I decided to go out on my own and try to get a head coaching position. I ended up at La Grulla where I started the boys’ basketball program at the new Grulla High School. After four years of success and playoff berths at Grulla High, I tired of the long commute so I went back to McAllen High where I coached the boys JV team for the past four years under Coach Ryan Flores.”

Taking over a basketball program that has had only one coach in its 16-year history is not an easy thing to do, but that is exactly what Ramos’ challenge is at Mission Veterans.

“Coach (Romeo) de la Garza did a good job with the program here at Mission Vets but I come in with a little bit of a different style of coaching,” Ramos said. “I try to be more of a new-school style of coach and more of a players’ coach. Coach de la Garza ran a very disciplined program, and so do I, but a lot of my philosophy is centered around the kids. I try to use a lot of motivation and a lot of positive encouragement as I try to build a family and a brotherhood with all the kids in the program.”

With their 31-5A district schedule not tipping off until Dec. 29, Ramos is pleased with his team’s success in non-district play. This includes a very successful La Joya tournament.

“We won the silver bracket in the La Joya tournament,” Ramos said. “It was the beginning of our team and it was a great tournament for us because we got to know each other. Every game in that tournament was close, and even though we did lose some close games, we defeated Corpus Christi King and Laredo Cigarroa both by two points in overtime. And that led us to the championship in that tournament.”

When asked what he is hoping to accomplish at Mission Veterans, Ramos said, “My focus is to get the kids excited about basketball. I want them to want to come out and play. I want them to want to come to open gym to practice on Saturdays, or anytime we have open gym. I also want to get the community excited about Patriots’ basketball and hopefully get more kids to come out for the basketball team.”