The Mission Veterans Patriots and their historic playoff run was the talk of the city, captivating the entire Rio Grande Valley for two weeks in December, like something right out of Friday Night Lights, the classic Texas high school football movie and series.

“It’s something you only see in movies, you don’t experience it until it happens,” said junior receiver Mikey Garcia. “Just driving around, you see people writing on their stores, you see it on their windows, people coming out and showing love, it’s been something I’ll never forget.” 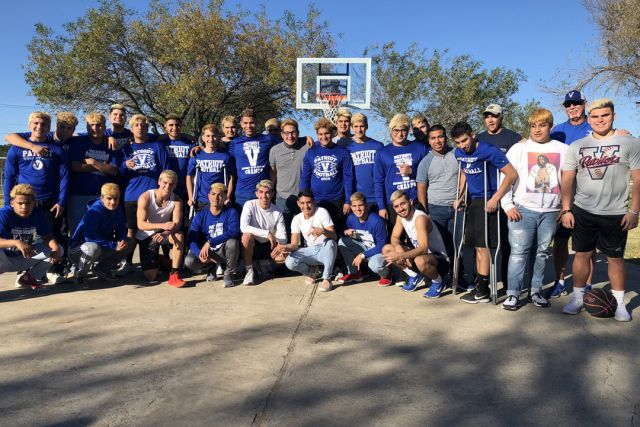 Since the Patriots have returned home from two straight Saturday’s in the Alamodome, Mission has continued to show love to their Patriots as they represented and helped unite the city.

On Saturday, Dec. 15, 2018, local businesses Ranch House Burgers, Spaugy’s Ice House, Brick Fire Pizza, The Progress Times and attorney Marco De Luna donated supplies and manned the grill at a team BBQ for the Patriots’ players and their families at Ray Landry Fireman’s Park in Mission. The day after the team appreciation bbq, Brick Fire Pizza opened its’ doors on Sunday for a Meet and Greet with the Patriots’ players, giving fans a chance to take pictures with the historic 2018 Mission Veterans team.

“It’s been awesome, the whole city rallying around us,” Meza said. “It’s been cool how people have offered to do stuff for us, from cooking for us to escorting us on the send-off, that way we can just stay together and be one family a lot of the time and that helped us grow our bond so strong. The support they showed every game night and even now, it’s been awesome.”

The team rallied behind the phrase One Heart Beat all season, and you could see why the team was so close just by seeing them off-the-field. Families of the players came together bringing desserts, others prepared food and plates of chicken, ribs and the fixings, while the Patriot players played 3-on-3 basketball, threw the football around and even pushed each other on swings, just like your family would at a backyard BBQ.

“One of our main phrases is One Heart Beat, and this is to represent that we’re all together as one, not only as the boys on the field but as parents and the community, being there and supporting each other,” said April Vallejo, the mother of senior outside linebacker Jazz Vallejo.

The team has spent years building bonds together, all the way back to the days of the Boys & Girls Club more than 10 years ago. That’s why Garcia said he’ll never forget the history made on the field and the fun had alongside his brothers off the field.

“A lot of us, we’ve all been together since Boys & Girls Club since like five or six years old, so it’s been a long bond,” Garcia said. “These are memories that I’ll never forget as I go throughout my life. I consider these guys my brothers. This is definitely something I’ll never forget and people I’ll never forget.”

Vallejo said she’s proud of the example the community set in backing these kids, which lets the future generations of Patriots and Eagles alike know the city of Mission is behind them.

“I’m really proud of my city and even for the future kids because this shows that we’re here for them whether you’re a Mission High fan, a Mission Veterans fan, or a fan of both, it just helps unite the city,” said Vallejo. “It’s been cool to see the community come together and show an appreciation for the boys’ and the coaches’ hard work and determination. We’re really proud of them.”