The Pioneer Diamondbacks and Lady Diamondbacks are off to a soaring start in 2019 as the two basketball teams spent their New Year’s Day on the court bringing home big district wins over Mission Veterans, 80-48 for the boys, and 40-31 for the girls.

Both programs are rolling through district play early on and have the potential to be two of the top teams, not just in 31-5A, but across the Valley, when it’s all said and done. 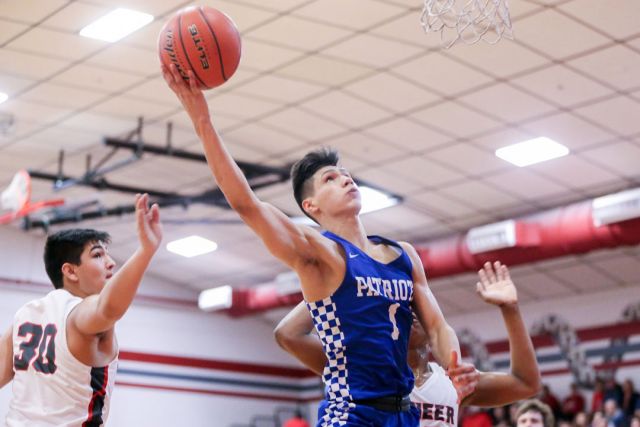 Lady Diamondbacks
The Pioneer Lady Diamondbacks (4-0 in 31-5A) are off to the best district start in school history as they’ve put together four straight wins to open 31-5A play. The Lady Diamondbacks and Head Coach Nicole Villarreal have taken steps forward by beating two playoff squads from a season ago in Palmview and Mission Veterans, and are looking like a team that could lead the district championship race all year long.

“They’re humble and they know there’s a lot of work that still needs to be done, but I do think that we’re all on the same page in regards to it’s our time,” said Villarreal. “We’ve been short before, getting better every year, but we feel like this is our year.”

The Lady Diamondbacks proved they’re contenders with a 40-31 victory against Mission Veterans on New Year’s Day. Midway through the 4th quarter, the Lady Patriots trimmed Pioneer’s lead to just four points. That’s when sophomore guard Audry Hornaday turned things up, scoring five of her game-high 16 points in the final quarter to lock up the fourth straight district win for the Lady Diamondbacks.

Hornaday spent the first three quarters picking her spots to attack and setting up teammates for an easy two. When the game got close, Hornaday, who can get her shot off at any time from anywhere on the court, took over.

“I feel like sometimes it’s harder for teams when I can shoot or I can facilitate really well to my teammates, which is something I love to do,” Hornaday said. “I love to pass the ball, it’s such a fun thing to do and find your teammates open and get them that quick easy score.”

The good thing about this Pioneer team is it’s not just Hornaday you have to stop. Villarreal and the Lady Diamondbacks receive contributions from seniors like Abby Jones and Alicia Martinez , while underclassmen like freshman Jordan Bravo and sophomores Danielle Rangel and Carly Hornaday play key roles.

“We had a very tough preseason and played some good district opponents as well, so now we’re confident,” said Audry Hornaday after the win over Mission Veterans. “At this point, we’re very confident in each other, very confident in our coaches in getting us to where we want to be; that’s winning district and making it to the playoffs for the first time in school history.”

The Lady Diamondbacks will be looking to keep their unbeaten district record intact on Friday, Jan. 4 as they face PSJA Memorial at 1 p.m. at PSJA Memorial High School in Alamo.

Diamondbacks
They’ll outrun you, they’ll outgun you, and they’ll lock you down.

That’s what the Pioneer Diamondbacks did on New Year’s Day with a 80-48 win over the Mission Veterans Patriots to move to 2-0 in 31-5A action.

The Diamondbacks scored 22 points in three of the four quarters against the Patriots and finished with four players putting up double figures as Luke Padilla, Lavar Lindo and Miguelangel Gonzalez scored 14 points a piece.

“We told our guys that we have to key on Noe, and we have to D him up and do our jobs in boxing out and pushing the ball up-court, trying to make them play our style of basketball,” said Pioneer Head Coach Rene Gonzalez. “The intensity starts in practice and it starts with our defense; we drill it to death and so far so good.”

With six players over 6 feet tall, four of them being starters, Pioneer poses a problem for any opponent. Add in the team’s athleticism and they can beat you in a number of ways. It’s a stark contrast from the young team the Diamondbacks rolled out that missed the playoffs a season ago.

“We’ve matured and there’s more chemistry,” said Padilla, a senior guard. “It comes from a lot of hard work during the summer, playing together and getting shots up every single day. When we play like this we can put up 80 points in any game. The sky is the limit for us, but we just have to put our mind to it.”

The Diamondbacks are set to take the court again Friday, Jan. 4 at 2:30 p.m. on the road against PSJA Memorial in Alamo with the chance to improve to 3-0 in District 31-5A play.