The New Year brought in the swearing in of new county officials, including the Hidalgo County Precinct 3 office.

Juan “J.J.” Peña was sworn in as Hidalgo County Justice of the Peace for the Precinct 3 Place 2 office at a ceremony held Tuesday at the Precinct 3 Commissioner’s Office. 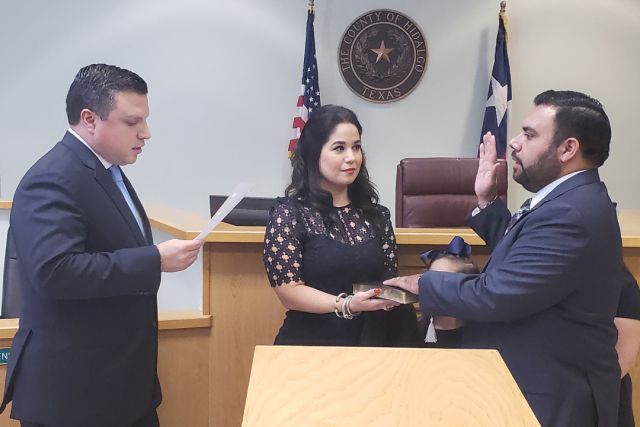 Peña, a businessman who served as a municipal judge for Palmview for six years and served two consecutive terms as a school board trustee for the La Joya school district, thanked those in attendance for their support in his campaign.

“I want to thank each and every one of you not only for being here today and for being here for me this past year and a half,” Peña told the standing-room only crowd. “All of you never stopped believing in me and what I stand for. I believe I will do what is right for the citizens of Precinct 3 and Hidalgo County.”

Peña announced his candidacy for office September 2017, beating out incumbent Marcos Ochoa in the March 2018 Democratic primary and tax preparer and immigration consultant Arminda “Mindy” Garza during the November 2018 general election with 68 percent of the votes.

The swearing in was attended by supporters and local officials with Father Roy Snipes of Our Lady of Guadalupe Church leading the crowd in prayer at the start of the ceremony. State Representative Sergio Muñoz Jr. officiated the ceremony with Peña’s wife and two daughters at his side.

As Justice of the Peace, Peña says his office handle “fine only” offense inquests, evictions, and small claims under $10,000 from west of Taylor Road all the way to the Hidalgo County and Starr County Line.

“It’s something I’ve wanted to do,” Peña said at his swearing-in ceremony. “As a former municipal judge and school board member, I made just decisions and served the community, it’s what I want to keep doing.”

Peña says as Justice of the Peace, he plans to extend office hours to better serve the community.

His office is typically open on weekdays from 8 a.m. through 4:30 p.m. and closed for lunch from 12 pm through 1 p.m. Peña says he plans to hold new hours where once a week his office will be open during lunch and hold court on Saturday once a month.

The finalized schedule for his office will be available Monday when the new schedule is set to take effect, Peña said.

“Having the office closed for lunch makes it difficult for people to come in because they have infractions they want to take care of but like everyone else, they have to work and we’re closed when they’re available,” Peña said.

“I’d like my staff to hit the ground running in the new year and work as efficiently as possible to prevent a backlog of cases.”

Ultimately, Peña said, his office will be open to serve his community.

“People don’t go to see a judge because they’re having a great day, they come because they need help,” Peña told the crowd. “As public servants, we’re here to extend a helping hand in a time of need. You have a friend in this court, I am here to serve each and every one of you.”