Moments after taking the oath of office — administered by his cousin, state District Judge Israel Ramon Jr., in the Hidalgo County Commissioners Court meeting room in Edinburg — Cortez addressed the standing-room-only crowd that arrived to congratulate him. 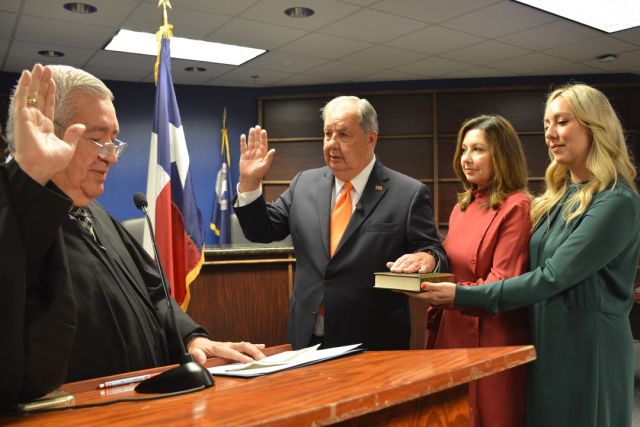 The Rio Grande Valley is unique, Cortez said, with opportunities and challenges that don’t exist anywhere else.

“Who decides whether it’s a strength or a weakness?” Cortez said. “We do.”

Cortez, who keeps a close eye on economic trends, didn’t bore the audience with details.

A report published last month by the Federal Reserve Bank of Dallas, though, compared the county to other major metropolitan areas in Texas.

Hidalgo County’s population is the youngest of any major metro area in Texas, with the largest share of residents under 15 years old, according to the report. The county struggles with poverty and poor educational outcomes. Just 18 percent of the population holds a bachelor’s degree.

Trade with Mexico and the local retail economy, which depends on cross-border shopping, insulated Hidalgo County from the recession. It also makes the county vulnerable to international trade disputes and currency fluxuations.

“Why do I say this?” Cortez added. “Because county government is important. But what is even more important is how and what we do with it.”

Ricardo “Richard” F. Cortez, 75, of McAllen, a retired accountant who served two terms as mayor, emerged as the consensus candidate in September 2017, when County Judge Ramon Garcia decided not to run for re-election.

Cortez brings decades of government experience to the job.

He started on the McAllen Public Utility Board, an elected board that supervises water and sewer service in McAllen. He served two terms as mayor, part of a team that steered McAllen through the recession. And after retiring in 2013, he returned to the City Commission to represent District 1, which covers northeast McAllen.

Cortez also served as president of the Border Trade Alliance and as a member of the International Bank of Commerce-McAllen advisory board.

After winning the election, he quietly put together a staff that mixed familiar faces from McAllen with longtime county employees recommended by other elected officials.

After the swearing-in ceremony, Cortez thanked Garcia for his support.

“He was a tremendous county judge,” Cortez said. “I want to thank him for his years of service.”

Governing requires tough decisions, Cortez said, adding that the county must be fiscally conservative but remember that growing revenue, not cutting costs, is the way to maintain a healthy budget.