After serving three terms as a Hidalgo County Judge, Ramon Garcia is ready to go back to practicing law full-time.

At a recent Commissioners Court meeting in Hidalgo County, the law library in the new courthouse was dedicated to Garcia. Upon completion of construction, Garcia’s name will be above the entrance to the library. 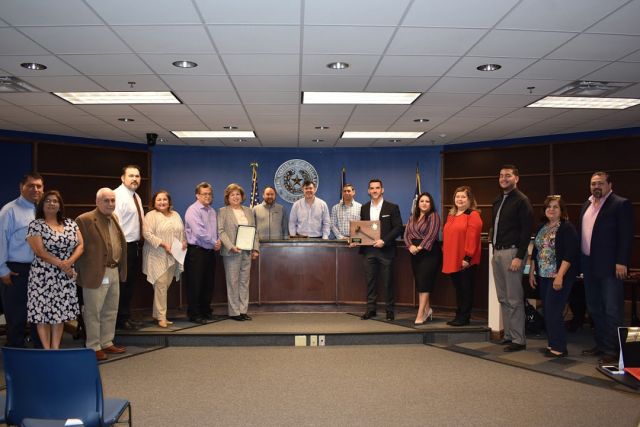 Garcia, who has practiced law for over 40 years, was surprised to hear about the dedication, as he was not involved in the naming process.

“They just let me know it was going to happen a few days before,” Garcia said, noting that the Commissioners Court voted on it. “I wasn’t expecting it.”

“It really has to do with public service,” Garcia said. “For whatever reason, I always saw myself as being involved in public service.”

In 1981, he ran for a state senate seat, where he came within 243 votes from winning the election. In 1994, he ran for the Chair of the County Democratic Party and won, serving as County Chair through the time he ran for and won the county judge position.

When Garcia was elected as a county judge, the reserve account for the county was at $710,000. By the time he left office at the end of 2018, it was at approximately $38 million.

Garcia cites fiscal responsibility as the main issue he ran on in 2002. With the find balance staying at $710,000 with three consecutive years of tax increases, Garcia knew building the reserve was vital for the county.
“We were basically broke at that point in time,” Garcia said. “One good rain would have left us without any savings at all.”

He said they had to get involved and “exercise fiscal responsibility” in the way the county government was operated. Through several budgetary changes, including self-funding the employee’s workers compensation and health insurance, the county was able to accumulate and save $38 million in the fund balance.

Garcia spearheaded the efforts toward the new county courthouse project, which is now in construction and is more than 28 percent complete at the time of press. He considers the project a vital endeavor for Hidalgo County.

“There’s a tremendous need for that building,” Garcia said. “Until people start using the courthouse, they don’t really appreciate the inadequate facility that we are working with.”

Inadequate, he says, because it was built in 1954, when the population of the county was at about 165,000 with three existing courts. Today, the population is at over one million people, with 25 courts.

“We need to accommodate them,” Garcia said. “More than half of our county courts-at-law are in those temporary facilities. We have a district court that is located here in an alley behind my office.”

He understands the need for a new courthouse, because, “if nothing else,” he is a lawyer, and after working in the county for over 40 years he has noticed and experienced the issues associated with the present building.

The new courthouse will feature an expanded new law library, which was recently announced to be named in Garcia’s honor.

“Obviously, I was grateful to the commissioners for what they did,” Garcia said. “I feel very honored that they’re doing this and giving me this recognition, but I didn’t seek it.”

A law library, found an any courthouse facility, is where lawyers go to find the law and argue that law to the judges. Garcia has one in his law office, but says having access to a more open library in the new courthouse is necessary.

“I’ve tried a lot of cases, several hundred cases,” Garcia said. “Invariably, when you’re in the courthouse, you need access to the law, and that’s where the law library comes in. It makes it more accessible.”

According to Garcia, serving as a judge took time away from his clients. Now that he is not seeking re-election, he intends to continue to practice law. Garcia is looking forward to returning full-time.

“Every case is important,” Garcia said. “I’ve always took pride in being prepared for my trials, and I’ve handled cases in over 20 states across the country, but I wouldn’t focus on any one in particular.”

Heading to the law library would be crucial for Garcia every time he worked a case in other states in particular, because he needed to consult the various state laws for each location, as they varied.

While he is stepping down from the judge’s position, Garcia is not stopping his practice any time soon.
“If you’re doing something that you like, that you enjoy doing, like I am and have been throughout my professional career, why stop?” Garcia said.