This article was published in the Progress Times issue dated Firday, Jan. 4, 2019.

As a show of appreciation to its dozens of supporters, the United Committee of Sullivan City held an appreciation dinner for them late last month in Mission.

Held at the Casa del Taco restaurant Saturday, Dec. 22, the United Committee of Sullivan City used the dinner as a way to celebrate its accomplishments this year. 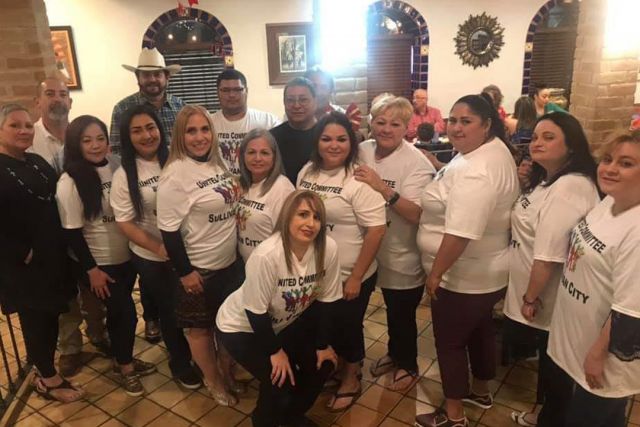 “We are very excited for this event. We work really hard and will plan our next fundraiser for January,” committee President Hermelinda Salinas said.

The committee is a group that split up from La Joya’s political coalition Citizens Working Together, or CWT, Salinas said. The committee was created two years ago with the purpose of raising funds for the children in Sullivan City.

“Everything was always politics there and we didn’t want that,” Salinas said. “So we began to raise money for the community and kids there. It’s a yearly process. We start with bingo games, we sell benefit plates and even go to one of our busiest streets with a bucket for people to put donations in. This year was even better than last year.”

Among the many events the Committee held last year was their annual toy drive that was held concurrently with Sullivan City’s Christmas in the Park where they gave out nearly 1,300 new toys to the children in the city.

“We do school supply drives, karaoke nights, National Night Out and Halloween and Thanksgiving activities for the community,” Salinas said. “We get donations everywhere from school board members, friends, and they help us. We all know each other since we’re from the same community we know who to turn to.”

The appreciation dinner was attended by nearly 30 people with dinner paid for with leftover money from what the committee raised in the last year, Salinas explained.

Among the guests was Hidalgo County Precinct 3 Commissioner Joe Flores, who Salinas said is the group’s biggest donor.

“I was born near Sullivan City and raised there,” Flores said. “I know many of these people and feel like I owe it to them to help them out and get them on their feet. I feel that it’s good to do this.”